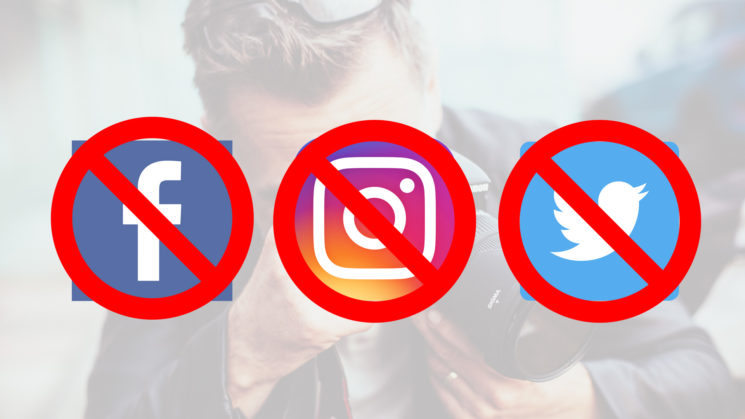 Hey guys. This morning I woke up and deleted all my social media. My Instagram, Twitter, and personal Facebook accounts (I deleted my Facebook business page a year earlier), all gone. I ghosted from the party. As a small business, it’s a bold move (if not insane) to walk away from such successful pages (I had over 60,000 followers between the three platforms). But I had had enough, and here’s why.

If you’re unaware, I started a podcast last year, wherein I interview photographers throughout the industry. In one of the interviews I interviewed Italian photographer Sara Lando. In our chat we discussed what it’s like to create art in the age of social media. She raised a fantastic point about how social media trains creatives to be inauthentic. At the least, social media trains us to stay within the lane of our “brand”.  An ill-curated feed results in disorder and unfollows galore. At its worst, social media changes the way we create, fundamentally.

In our conversation, Sara makes a point that over time, social media trains us to create and post in a manner that pleases the apps’ algorithm. If a post does really well and followers respond well to a certain kind of image or technique, we begin to form a Pavlovian drive to replicate that response. For example, when I post an image with a lot of red, or shutter drag, those images would outperform my other posts by two or three times. Over time this began to motivate me to not only post more images with movement or red, but I would also shoot more in that manner. My art was becoming a meme.

Aside from the social media affecting the type of work that I create, there is also the human element to consider. Personally, I am someone who gleans much of my information through external data points. I overthink everything. This makes social media a minefield for someone like me. I would analyze likes and follows and unfollows and draw conclusions based off what were likely benign engagements, and I would arrive at concrete and final conclusions that negatively impacted real life relationships. It sucked, to put it mildly.

I personally believe that humans aren’t built to have relationships with thousands of people. We can care for a core group of friends and family, and beyond that our interactions will be short and shallow, and relationships will inevitably fall between the cracks. This was a conversation that I had in a different episode, with Jay Gullion. Yet I continued to push myself to try and make social media work, to have no enemies, to love everyone I interacted with. In the end, it proved to be an impossible task.

For years I viewed social media as a necessary evil. I invested thousands of hours and even more dollars to promote and position my brand (self?). Running a small business is work enough, without factoring in how to leverage work and art in the ever-changing social media game. I went back and forth, debating whether my business could survive without a social media presence.

I launched my LLC in January of 2007, meaning that my business never existed in a time without social media. At the time I used Myspace and Flickr. Then it became Tumblr and Facebook. Then Twitter and Instagram were the obvious choices. All the while I held the thought that if I pushed my social media accounts hard enough, my work would be seen by the right people and the big clients would start rolling in. So I kept pushing.

The main reason I had selected Jay to interview for my podcast is that he maintains a posture that stands in opposition to current society. Though Jay is a photographer (and designer and director, etc, etc), he has no website, his Instagram posts are vague and infrequent, and yet his business is thriving. He creates campaigns for a number of luxury brands (Land Rover, Hermès, Bottega Veneta), and yet he rarely posts about it and almost no one knows who he is. This echoed what I had been long told by industry elders: it’s about your network— who you know. No social media account or agent or client is going to be your savior. Word of mouth is always the key to success in a small business, which comes from doing right by your clients and creating work as often as you can. Jay’s curious case study gave me just the data (and permission) that I needed to take the leap.

One other idea we discussed in our conversation was the philosophical idea of “if a tree falls in a forest”, but in terms of art-making. If I create something beautiful— something I am immensely proud of— do I need to share it on social media? Do I need others to affirm it? Can the act of creation be enough? Can I keep the beauty for myself? Though I didn’t have an answer at the time, I have decided to try and find out for myself.

Nick Fancher is a photographer, author, and educator who specializes in dramatic lighting, often employing the use of bold colors and experimental camera techniques. His work ranges from portrait and commercial photography to fine art. He is particularly known for his efficient method of working, which is with the use of minimal gear, often in unconventional locations.

You can see more of Nick’s work on his website and read his blog. This article was also published here and shared with permission.

The Value of Social Media Followers: Does It Matter If They Are Real or Fake?

Media companies can’t use your social media photos without permission, court rules
« 2019 World Press Photo contest nominees will give you chills [NSFW]
Bowens really is back – and they’re made by Godox »