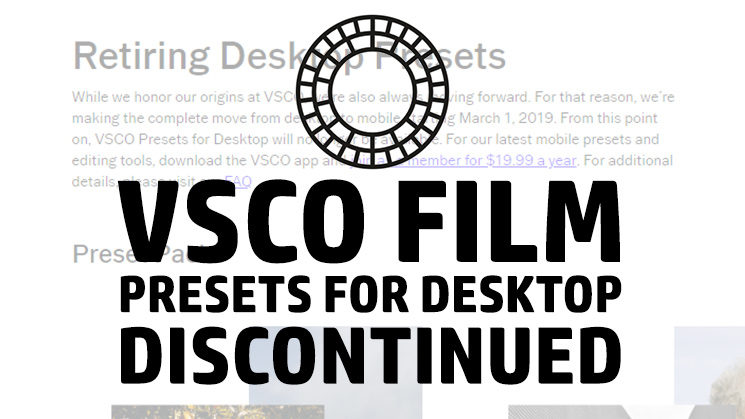 VSCO has announced that the much loved VSCO Film Presets for Desktop are coming to an end. The company says they’re moving completely away from the desktop to focus solely on their mobile app.

The Presets for Desktop have been rather popular over the years, although that’ll all come to an end on March 1st, 2019. VSCO hasn’t really said why they’re killing them off, except to say that they are “always moving forward” and focusing on mobile.

According to the VSCO Film Discontinuation FAQ…

Can I receive a refund or exchange for VSCO Film?

We are unable to process any refunds or exchanges for VSCO Film.

Will I still be able to download my previously purchased VSCO Film products after the discontinuation of the product?

Can I still view my license key(s) in my VSCO account for my VSCO Film products after it has been discontinued?

So, if you haven’t downloaded your presets by March 1st, 2019, you’ll never get them. And if you lose your license key and need to reinstall, that’s gone as well. So, you’d better write it down. And you won’t get your money back.

The demise of VSCO Film Presets for Desktop also means that all support for the product will come to an end, too. It will no longer be updated, and will not be guaranteed to work with future versions of Lightroom, Photoshop or Adobe Camera Raw. They suggest reaching out to Adobe Support, although why they expect Adobe to support a 3rd party plugin, I’ve no idea.

And if you get a new camera that isn’t currently supported….

After March 1, 2019, we are no longer updating our VSCO Film products. If a new camera is released after that date, unfortunately, you will not be able to use VSCO Film for your RAW files from this camera.

You can continue to use the VSCO Film – Standard presets on JPEG images included in the installer.

I suppose it’s possible that future cameras might work if you run the raws through Adobe’s DNG converter, but I imagine they’re not providing any guarantees on that, either.

Kodak T-Max P3200 TMZ film is coming back in March

« Sigma announces availability for the new 70-200mm f/2.8 Sports and can’t keep up with demand
Deal alert: B&H is knocking $430 off the DJI Mavic Pro Fly More combo for today only »