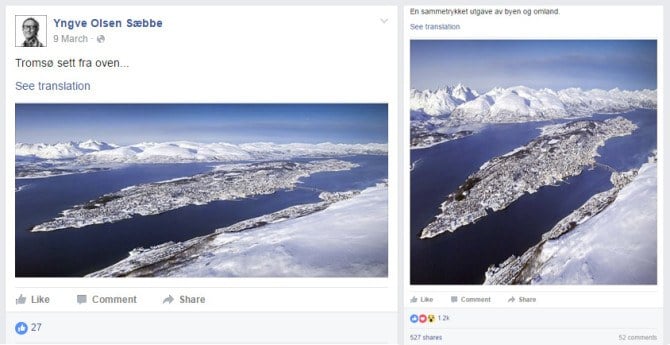 We’ve covered the “evils of Photoshop” as it pertains to human subjects a number of times, but the use of some photography and Photoshop techniques in travel photography are starting to cause concerns to grow that tourists will become disappointed upon arriving at their destination.

Social Media’s constant pressure for “Shares” and “Likes” is only fuelling this trend towards making destinations appear more attractive by intentionally warping our vision of the world.

Norwegian photographer Yngve Olsen Sæbbe recently performed an experiment through Facebook to test a theory by posting two images of Tromsø and the surrounding area in Norway, one of which had been squashed and stretched to make mountains appear taller and provide a more overhead view of the island, to see which gained the most traction on social media.

The original photograph, with the description that translates out as “Tromsø seen from above…” shows the scene as it was created by the photographer, as it presented itself to him at the time he created it.

At the time of writing this piece, the above image currently stands at 26 shares and 27 likes. Numbers that some of us might be quite pleased with if it were connected with one of our own images, but not Yngve.

For the other half of his experiment, Yngve posted a second version of the image which has been stretched vertically to increase the height of the mountains, whilst simultaneously giving the appearance of a more overhead view of the island.

By contrast, this version of the same photograph currently has 527 shares, and 1.2K likes.

As is plainly obvious, the population at large much prefer the distorted version of reality presented in the altered image.  Will it sway their thinking and cause them to want to visit and see the location in person?  For most of us, probably not, but for a few it almost certainly will.

When it comes to going on vacation, or visiting a location to see and photograph it, we occasionally make our decisions based on personal recommendations by friends and family, but largely due to how the image appears to us in photographs seen online.

Another travel subject which has received some criticism are the Northern Lights.  With so many long exposure photographs of the aurora being shown online, and CG videos in movies, we are bombarded with imagery that are almost impossible to see with the naked eye.

Norwegian photographer, Benny Høynes receives great responses to his photographs of the Northern Lights, and is of the belief that such images don’t necessarily disappoint the visitor upon seeing the scenes in person, but agrees that it is possible to go too far.

In a discussion with broadcaster NRK, Benny stated (and Google translated)…

I am not sure there is some dissatisfaction among the tourists who come here.  I’m pretty sure that few people are disappointed when they first get to experience the Northern Lights.

The weather and the natural variations in the Northen Lights intensity [is] a larger problem.

Like many of us, Høynes shoots raw, and so has considerable freedom to adjust his images in post to tweak the colour, contrast, and really bring out the details, but with shutter speeds potentially going up to several seconds, the camera can accumulate light and see colours that the eye simply cannot.

Techniques like HDR also allow us to capture scenes in ways that the naked eye or a single exposure cannot, yet are common and recognised techniques for such photography.

Stretching images and physically distorting the shape of landscapes, particularly seems quite a persistent, if not popular, technique for many Norway locations, and a quick Google Images search immediately shows more than one or two suspects subjected to such modification, but does stretching it out a bit in Photoshop really make that much difference?

Just getting closer or further away and changing our focal length can often have a similar such effect on a landscape, and make mountains appear taller or shorter than they actually are.

Is manipulation through Photoshop not also a creative choice just like choosing the position from which you shoot and the lens you use?

What do you think?  Have you ever visited a destination in Norway or anywhere else in the world after seeing images online and felt entirely underwhelmed upon arrival?  Or have the scenes been even more impressive once you’ve arrived and seen them with your own eyes?

Don’t fall victim to “What ifs”