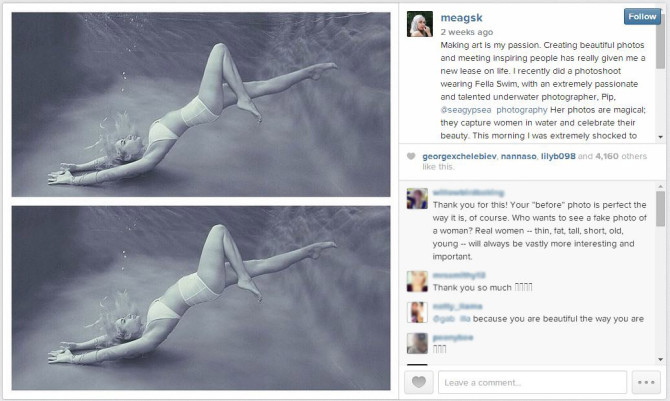 Screenshot of the original photo and the altered photo.

After discovering each other through Instagram, underwater photographer, Pip Summerville, and model/self proclaimed mermaid, Meaghan Kausman, decided to take on a personal project together. Summerville wanted to take photos of Kausman posing in a swimming pool and when Fella Swim heard about the pairing, they were nice enough to offer up some free swimwear for the model to use in the photoshoot. According to a statement made by Kausman, the entire shoot was a collaboration and no payment ever changed hands.

Which is why it was especially shocking for Kausman and Summerville to discover their images on the swimwears Instagram account only days after Summerville posted them to her own Instagram. Not only had Fella Swim posted the images without receiving prior permission, they also photoshopped the model’s size 8 figure into a much smaller frame.

Kausman, whose father works as a positive body image advocate, was outraged with the manipulations, just as much as Summerville was outraged her photos were used without consent or notice. Kausman posted the side by side comparison you see above onto her Instagram account along with this message calling Fella Swim out:

Making art is my passion. Creating beautiful photos and meeting inspiring people has really given me a new lease on life. I recently did a photoshoot wearing Fella Swim, with an extremely passionate and talented underwater photographer, Pip,@seagypsea_photography Her photos are magical; they capture women in water and celebrate their beauty. This morning I was extremely shocked to see that Fella Swim had uploaded a photoshopped version of Pip’s original photo to their Instagram page. They had drastically altered my body, thinning out my stomach and thighs in an attempt to box me in to the cultural ideal of beauty. Above is their version, below is the real version. My body is a size 8, not a size 4. That’s my body! I refuse to stand by and allow ANY company or person to perpetuate the belief that “thinner is better”.  All women are beautiful, and we come in different shapes and sizes! This industry is crazy!!!! It is NOT OKAY to alter a woman’s body to make it look thinner. EVER!”

According to The Courier Mail, Fella Swim eventually removed the altered image and offered this (sort of) apology to Summerville and Kausman:

Meaghan is actually incredibly beautiful and we love the original image by @seagypsea_photography. We meant no disrespect for photoshopping the image and apologize that it has offended some people here. Unfortunately like most magazines, media and images you see on here, the girls have been retouched to look, taller, thinner and different to what they really [sic], and yes, all to see a product. Apologies to @meagsk you have made a point of us and we will remove the image. If we knew this would upset you, we would of [sic] never posted it.”

Personally, I got a little confused when they called it unfortunate that most magazines alter images of models in an open apology to a model to whom they did the same thing to. It’s almost like saying, “Look, it’s unfortunate we have to Photoshop models, but everyone else is doing it, too. It’s just the way it is now and I hope you can get used to it.”

What’s your take on Fella Swim’s stance? Is Photoshopping models to make them appear thinner an industry norm that will never go away or is there hope for body image advocates like Kausman?

FAQ: So Your Company Has Been Found Using Alex’s Photographs Without Permission. What Next?