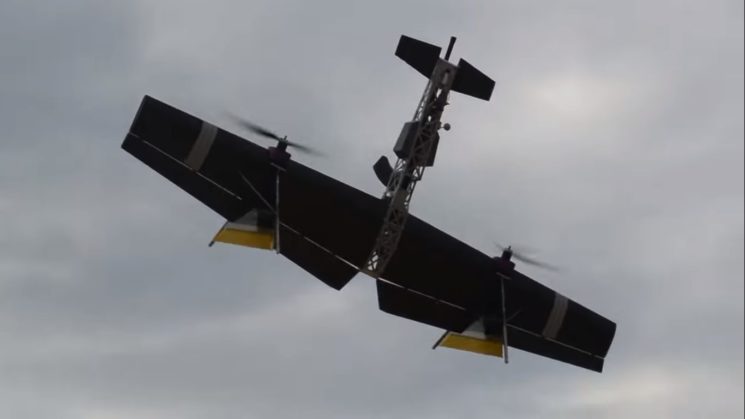 We’ve seen all kinds of weird methods for taking down drones. But if you’ve been wondering what the most dangerous one may be – I think I’ve just found it. Russian defense manufacturer JSC Almaz Antey has created a monster: a drone that flies around and literally shoots at other drones with a shotgun.

JSC Almaz Antey has filed a patent for the scary shotgun-wielding drone, according to Russian defense blog Dambiev. Jalopnik reports that work on the shotgun-drone began in 2016 and that it was carried out by the Student Design Bureau of Aviation Modeling at the Moscow Aviation Institute.

The drone looks, well, pretty much like any other drone. Except that it carries a fully automatic version of the Vepr-12 shotgun. It weighs 50 pounds and has a flight time of 40 minutes. It’s controlled by an operator wearing a visor which lets him shoot through a live video link and sighting system.

There’s also a video showing a prototype of this scary aircraft, flying around and showing what it can do:

As I’ve mentioned, there are plenty of other ways to take down drones. Dutch police used trained eagles, but this program was luckily shut down after people had expressed concern for the animals. Japan also turns drones against its own kind, but with nets, not shotguns. And the same goes for Utah-based Fortem Technologies.

But having a drone flying around with a shotgun… Well, it makes me feel uneasy just to think of it. As Jalopnik notes, a drone like this is technically “an unmanned fighter plane,” and that was my very first thought. This Russian drone is only a prototype, and I certainly hope that it will stay that way.

« Ricoh recalls some GR III cameras due to wobbly control dial, offers free repairs to customers
Seed Creative totally nails it in this high-end showreel. Not »