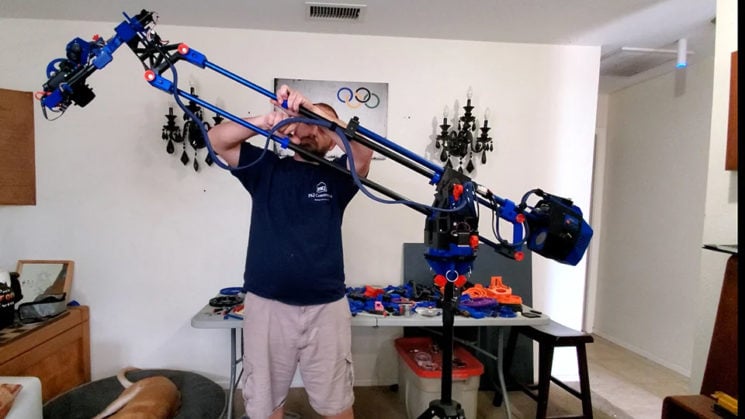 The rig is essentially a motorised camera jib with a gimbal on the end that also offers computer control over both the focus and zoom of your lens. It’s a mammoth task to take on, and a couple of videos over the past few months on Chris’ YouTube channel show some of its various stages of development.

This latest video comes with the release of all of the files, through Thingiverse, so that you can start working on the printed components in order to build your own. Chris has also released the bill of materials – all the extra stuff you’ll need to buy to go along with it. Fortunately, it’s all pretty easily available.

For the electronics, you’ll need…

And for the rest of the hardware…

One of the best features of Chris’ design is that it allows for continuous full 360° rotation in most of the axes pretty much indefinitely. This is thanks to the use of slip rings, which maintain a constant connection while rotating – unlike regular wires, that just get caught up and rip out. This means you never have to worry about making sure things never over-rotate or resetting axes back to a default position each time you go to use it. 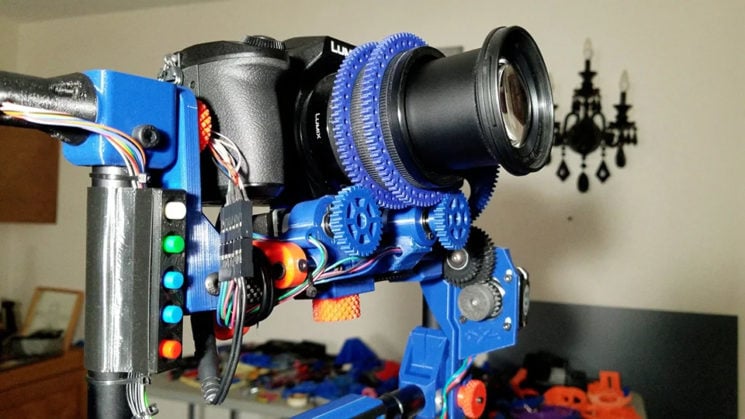 There’s a lot of clever design in this rig, but as it’s open-source, you’re free to modify it and tailor it to your own needs, too. Chris has two more videos on the way going over the rig’s physical build process and another to explain all the electronics.

One thing that Chris does admit in the video, though, is that he’s not a software guy, and admits there is some definite room for improvement. Right now, it runs GRBL, which is essentially CNC software and the gimbal is moved using the same regular g-code commands (sent via the Universal Gcode Sender) that you’d use with a CNC milling machine or 3D printer. But Chris does provide some tips on using the code in the description of the video as well as in the actual video itself.

It would be great to see this project take off and there are so many ways it could be extended. Somebody could start to write some custom software that takes things like inverse kinematics into account so you can just tell it where you want it to move in 3D space and it just works out all the positioning for you and moves the gimbal where it needs to be. Or perhaps somebody can modify the design to use rotary encoders to let you keyframe positions simply by moving the head manually from one place to another.

Even as it is, though, it’s very cool already.

You can download all the plans over on Thingiverse, Chris has more details to help you build your own in the description of the video, and he’s still got (at least) two more videos about it that he has yet to upload to his YouTube channel. I don’t know about you, but I’m definitely looking forward to seeing those!