There are many times where we share stories that make me lose hope in the human race. But every once in a while, we get to share an optimistic story about humankind. Today belongs to the latter.

Photographer Adam Sherez found a Mavic Air 2 while shooting in Jerusalem. The drone was in one piece and looked quite new. With a price tag of $799, Adam was sure that someone is having a terrible day now, missing a drone. Here is the problem, the drone had no contact details to contact the owner. Adam posted a photo of the drone in the relevant groups, but nothing came up. 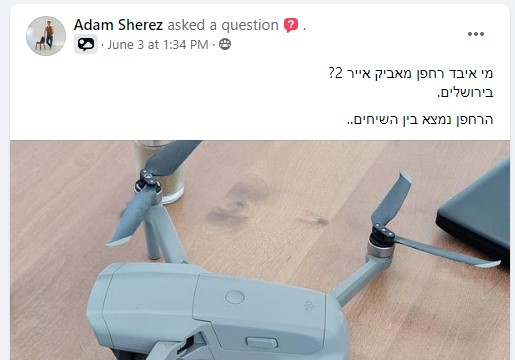 Google translation: Who lost a Mavic Air 2 In Jerusalem?
It was found is in the bushes.

With zero response, Adam took the card out and checked the photos. The first shot appeared to be a video selfie of the drone owner while taking off.

The good news is that it was something to bite on. The sad news was that the owner seemed ultra-orthodox and probably did not use Facebook or Instagram.

Back to the Facebook groups, but this time with a screen capture from the take-off video. Here is the amazing thing. In less than an hour, Adam got the contact details of the drone owner. After a quick verification (when was your last take off? who else is in the selfie shot? and so on..), they set a meeting to return the drone to its rightful owner.

It turns out that the Mavic lost the connection with the remote at some point, and it crashed. In hindsight, the drone probably realized that it was in the huge No Fly Zone (NFZ) and decided to, well… not fly.

The lesson? Maybe put a label with your phone number on the drone (if your local laws don’t require it already)