Computer keyboards are all fairly standard these days, with very few exceptions. You’ve got the standard, normal, boring keyboards for PCs and Macs, then you’ve got the hot looking gaming keyboards with their backlit Cherry MX keys and 3 million macro buttons, and then there are the speciality keyboards, like Blackmagic’s editing keyboard for DaVinci Resolve.

But what if there were one designed specifically for creatives? While the Kolude KD-K1 (currently on Kickstarter) does offer benefits for gamers and regular office workers, it’s a decent looking bit of kit for creatives, too, thanks to SD and microSD card slots, HDMI output and a built-in USB hub.

It’s currently funding through Kickstarter with early bird prices starting at $109 with shipping expected in June. Unlike most keyboards, there’s no wire coming out of it, just an array of ports and sockets on the back. One of the USB sockets gets wired into your computer, which enables the keyboard and all of the other devices.

Those ports include an HDMI 2.0 socket capable of 4K 30Hz video for expanding or mirroring your computer’s desktop, three USB 3.0 and a single USB 2.0 socket, a USB C host/data transfer socket, and a USB C Power Delivery (PD) socket that supports up to 100W. It’s compatible with Mac, Windows and Linux but also with Android and some iPad Pros. 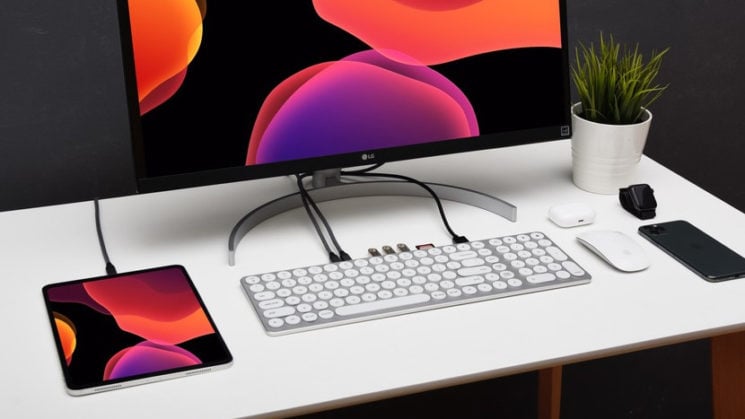 Overall, it looks pretty handy for creatives, whether it stays on the desktop or you take it with you on the go. The only thing that looks like a bit of a downside is that the microSD and SD card slots appear to only be UHS-I. It doesn’t say on the campaign, but there’s no mention of UHS-II anywhere, which usually means they’re UHS-I. So, if you’re working with UHS-II cards, you’ll still need a separate, faster reader.

If you want to get one of your own, you can head on over to Kickstarter and back it now starting at $109. It’s well over its goal and currently has 10 days left. Personally, though, I think I’ll wait until they’ve shipped them out to backers and there are some real-world unbiased reviews out there.

« Photographer charged with arson and criminal trespass after setting house on fire to photograph it
Celebface: Why everyone looks the same on Instagram »