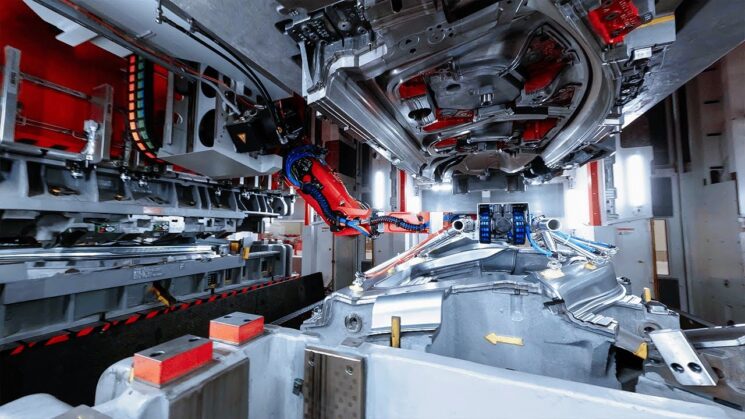 Last week we shared a video produced for the car manufacturer Tesla that showed some incredible footage of a first-person view drone flying through the new manufacturing plant in Berlin.

Drone pilot and digital creator Ferdinand Wolf of  Skynamic was the man piloting the drone and has shared some of his behind the scenes experiences and explained how they made the video.

The video of the Gigafactory in Berlin had just one day of scouting available. On this day Wolf explains that they were able to do some location scouting and try out some test flights.

“On location, we then planned the shots rather run-and-gun style, which was only possible because of the amazing support of all the Tesla Gigafactory employees,” says Wolf. “Everybody there was super supportive and tried to help us as much as possible to get our shots.”

The most difficult part, of course, was flying through the giant machine presses, something that had never been done before with a drone. It certainly looks dangerous when you watch the footage, and Wolf says that he needed video-game skills and knowledge of how the machines worked to pull it off.

“Because some of those shots have never been done before, like flying through the Giga Press and Stamping Machine, we had to understand how the machines work and where we can fly without risking the machines and drones,” he explained to Tech Radar.

“The biggest challenge with shots like this is mostly getting the timing right,” says Wolf, “especially when you work on longer shots that involve people or machines doing different things that end up in one choreography.”

“At the Gigafactory we often did not have any control over the machines and had to wait and watch how they operate so we could time the flight accordingly, which in this case were the robot arms and various machines,” he adds.

“Flying the drone often felt like playing a Super Mario game,” says Wolf, “where you have to time your jumps and runs to dodge the obstacles.”

Two types of drones were used for the shoot: one for the indoor shots, and another for the outside of the building. Indoors required a very light, nimble craft so this was shot using a ‘Cinewhoop’ drone with 2.5in propellers. Cinewhoop drones have protected propellers which make them ideal for flying close to people or through difficult spaces.

The VR goggles are of course the key to flying successful First Person View drones. Without them, it would be almost impossible to pull off the types of manoeuvres like the ones in the Tesla video. The other important aspect was that the drone used a “naked” GoPro that had been stripped of its entire body, screen, battery, and casing to make it as light as possible. The whole drone weighs under 250g.

The other difficult aspect was having to fly blind when shooting reverse footage. These drones have no obstacle avoidance sensors like more consumer drones and have no reverse cameras. However, Wolf has over 30 years of expert flying experience under his belt and was able to manage these moves without breaking a sweat.

Like anything, becoming an expert in FPV drone flying takes a lot of practice and dedication. “You have to train hard and practice flying pretty much every day to get the routine and confidence to fly in environments like this,” says Wolf.

Here is the video again:

How to plan and make a viral timelapse video