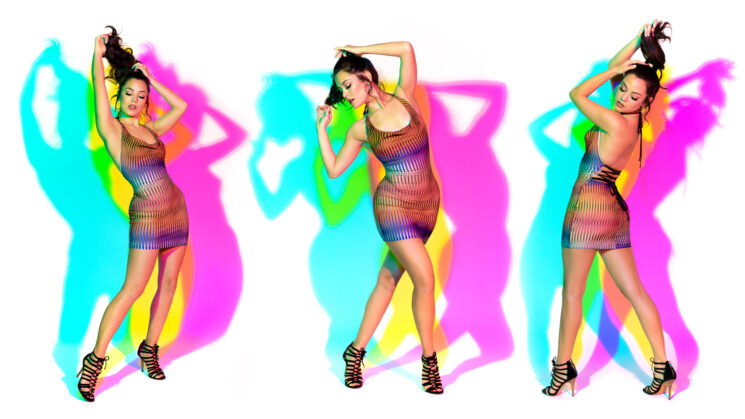 How do you make white light? No, that isn’t a trick question. Most of us are fairly familiar with using different colour temperatures and even playing around with gels but if you get a little bit creative you can use gels and lighting to make some really interesting effects.

Commercial photographer Ron Hautau created these dynamic portraits using a relatively simple set-up and some basic physics. So how did he do it? We caught up with Ron to find out how. 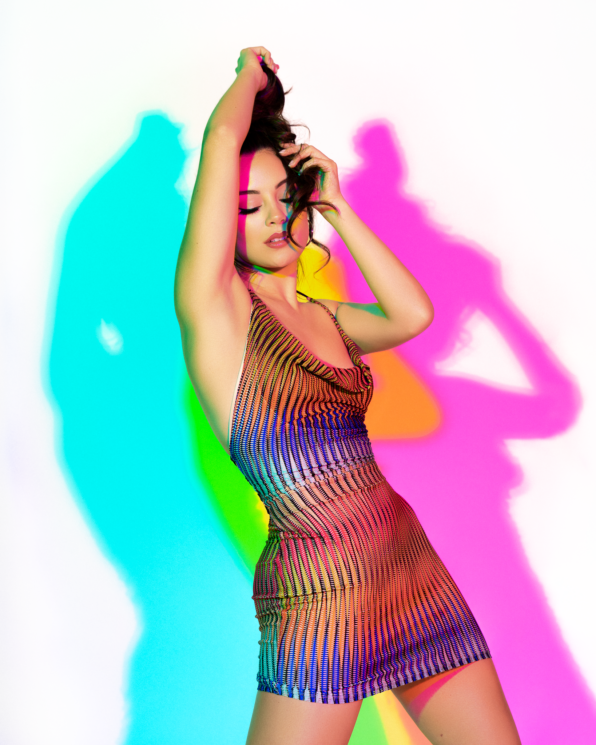 “There is no white key light,” says Ron. Wait, what? Clearly, the background is white, as is the light hitting the model. It’s a little like the “there is no spoon” scene from the Matrix. My mind is blown.

So back to the first question: How do you make white light? Of course, it’s a mix of red, green and blue. And that is the key (no pun intended) to this whole trick.

Ron used 3 gelled lights, red + green + blue. Combined these make white ?+?+?=⚪ and that is the light you see hitting both the model and the background. The important part is that the 3 lights are placed in different positions relative to the model. 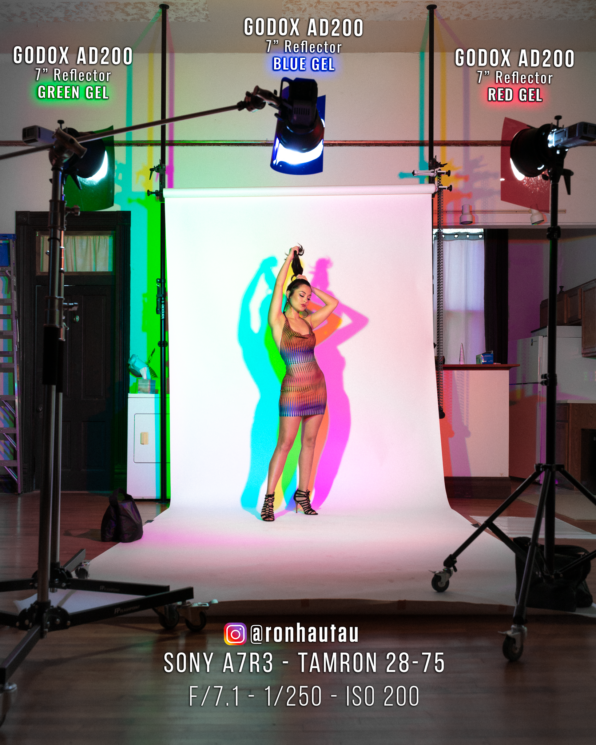 Ron used 3 strobes with red/green/blue gels and 7″ reflectors to create hard light and defined shadows. No grids – they would ruin the effect since the colours would no longer overlap. 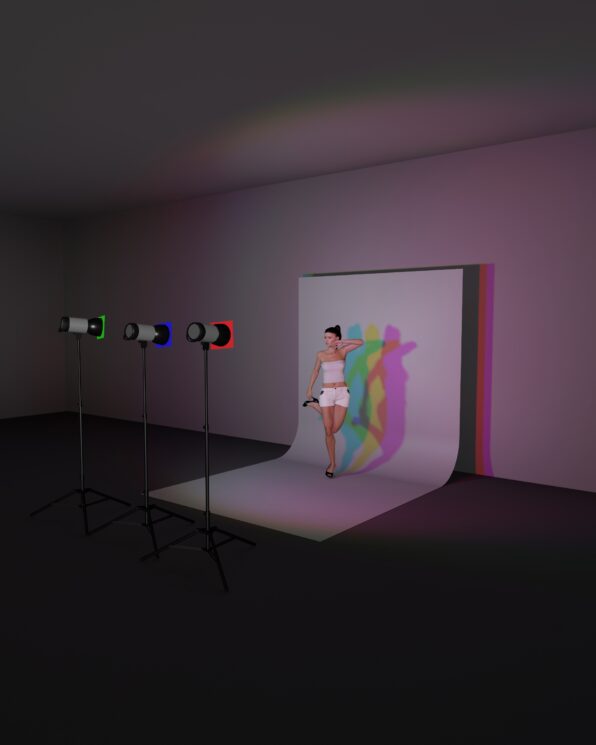 That’s pretty straightforward, but how then do we see the magenta, yellow and cyan shadows behind her?
“The colours only show where the lights don’t overlap, in the shadows,” Ron explains. “The cyan, magenta, and yellow are created from combinations of red, green, and blue light overlapping. For example, the shadow on the model’s right side is cast by the left green light, and blue and red overlap to fill that shadow with pink light.” So simple, yet so effective. 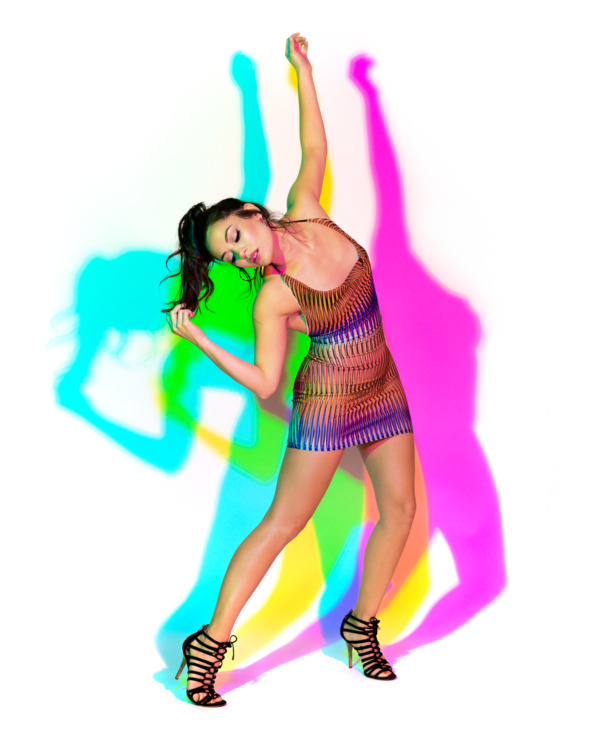 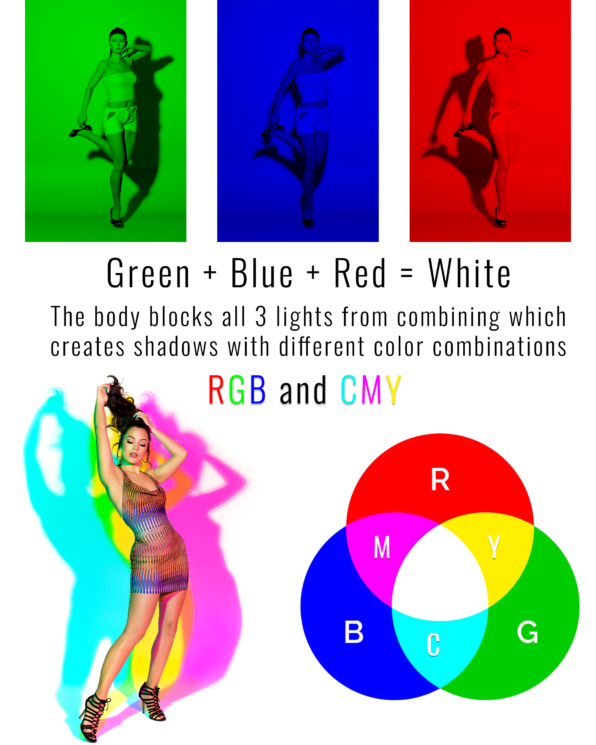 But why then are the shadows not grey, like regular shadows? I asked DIYP’s resident physics nerd John to explain it in terms that even I can understand!

“If you turned two of the lights off, the shadow would be grey,” John explains, “but because they’re all coming from different angles, they’re all shining their colour on different parts of the background relative to the subject.” And that is why we see those wonderful coloured shadows. 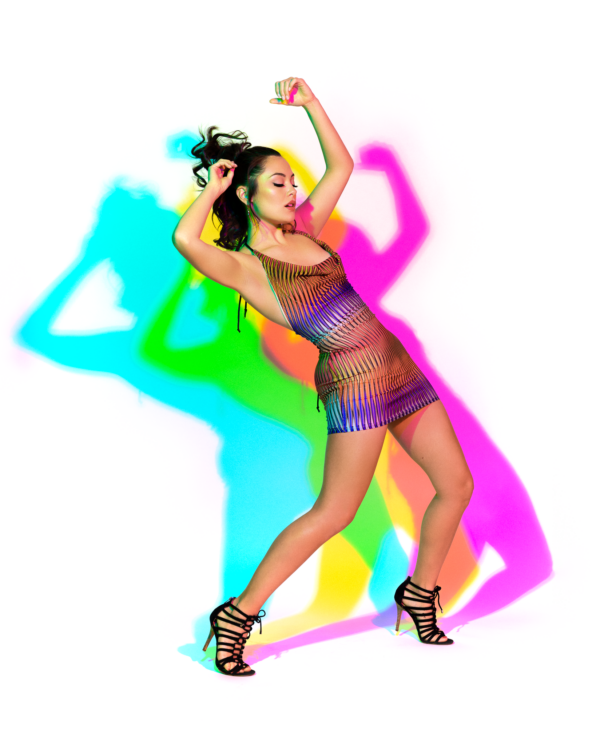 It’s an awesome effect and extremely satisfying that you can achieve it straight out of camera, with no Photoshop involved.