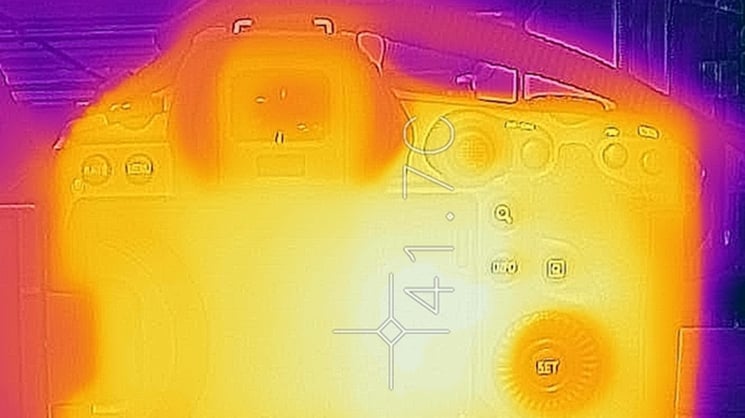 LensRentals just recently posted their teardown of the Canon EOS R5 and noticed that it has some pretty hefty seals to help protect it from the elements when shooting outdoors in harsh conditions. But they theorised that those seals and the tightly packed components might hamper the EOS R5’s heat dissipation abilities.

Well, now, Roger and the team at LensRentals have pointed a FLIR thermal IR camera at it to see exactly how hot the Canon EOS R5 gets after it’s been on for a while at different parts of the camera body. And some of it… Well, it gets extremely hot!

The guys performed several tests on the shell of the camera first, which showed that it held up against heat pretty well, by warming a section of it up to 180°F. But they say it took over 10 minutes to cool back down to room temperature – raising the question of how heat is supposed to escape when it’s fixed onto the camera.

It’s worth noting that the first round of tests was performed with the original the v1.0 firmware and not the recently released v1.1 firmware. When setting it down to shoot 8K with a CFexpress card in the slot and the LCD flipped out, the hotspot on the back of the camera quickly became quite obvious under the heat vision of the FLIR camera. 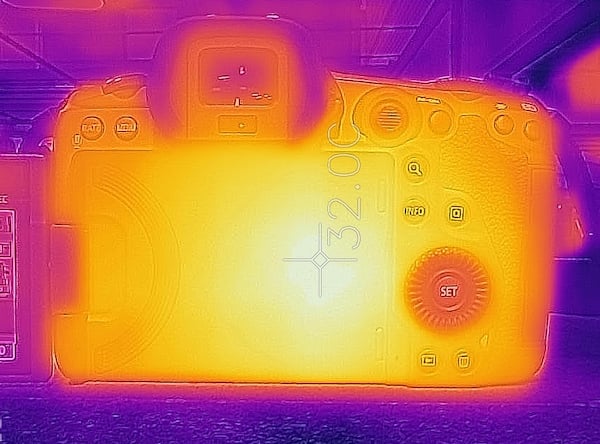 This is exactly the spot where the processor and SDRAM chips live – which isn’t really going to be much of a surprise to anybody. The top of the camera remained fairly cool, with the hotshoe essentially only warming up to 23°C. But as they approached the 20-minute cut-off point, things started to heat up a bit. Much of the camera’s exterior hovered around 40°C.

The camera was then left to cool, upgraded to the v1.1 firmware and the test was performed again. Now, it’s a 25-minute cut-off time, 5 minutes longer than the original firmware. The runtimes did increase the temperature of the camera’s exterior, but only very slightly – less than 1°C difference in most cases. 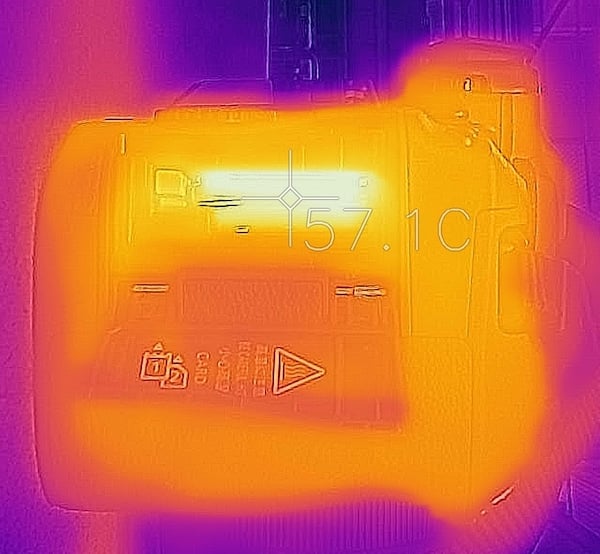 All in all, though, it doesn’t look like Canon can do anything about the potential overheating issues – at least not if you’re saving out 8K to CFexpress. Even the workarounds, while they may work for a little while, may also kill your camera eventually because there’s just nowhere for the heat to go. Sure, you might be able to do something with a hardware modification to cool the components, but then you’ve probably voided your warranty.

It looks like this probably isn’t the camera for you if video’s your primary thing.

Check out the complete set of tests as well as Roger, Joey and Aaron’s thoughts over on the LensRentals blog.