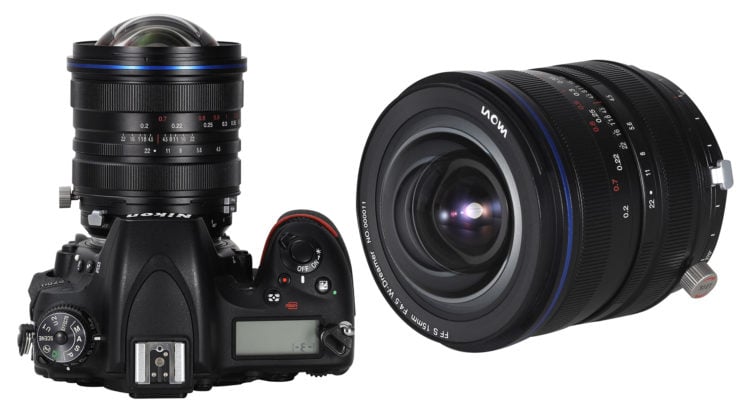 Offering +/- 11mm of shift (or +/- 8mm on medium format cameras like the Fuji GFX series – although, you’ll need an adapter), the lens allows you to correct for the perspective issues inherent in shooting ultra-wide-angle lenses which gives the appearance of buildings “leaning” in the shot. It corrects to keep vertical lines vertical in-camera instead of having to try to fix it in post.

As pointed out in Richard’s video above, this isn’t the first shift lens released under the Laowa brand. It’s not even the first 15mm shift lens they’ve released. That honour goes to the Laowa 15mm f/4 Wide Angle Macro. But this new lens expands the +/- 6mm shift of the macro lens to an extremely impressive 11mm thanks to its huge 65mm diameter image circle.

That large image circle also means it’ll work on medium format cameras like Fuji’s GFX range, where you get a range of +/- 8mm. To clarify, you do actually get the full 11mm movement range in both directions, however, you’re going to start seeing some slight vignetting once you hit 9mm. Below that, though, it covers that GFX medium format sensor just fine. 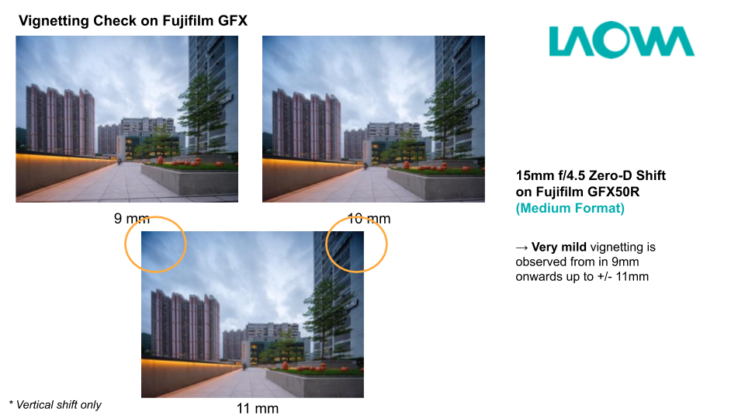 As it’s a Zero-D lens, it offers near-zero barrel or pincushion distortion, like the rest of Laowa’s Zero-D lineup. It has a very close focusing distance of only 20cm (the f/4 macro version had a minimum focus distance of 12cm) and it also offers a full 360° of rotation, allowing you to shift the lens at any angle and offer a lot more control over correcting perspective with the camera in just about any position.

But what difference do shift lenses make in the real world? Well, here’s the same scene shot with the same camera and lens, but on the left, zero correction shift has been applied. On the right, the lens has been adjusted to correct for the perspective and upward angle of the camera. As you can see, it makes a pretty drastic difference (and it’s why large format film is still a thing for many architectural photographers).

Shift lenses are designed primarily for photographing buildings and architecture – which became immediately obvious with the selection of sample images Laowa sent to us along with the press release. 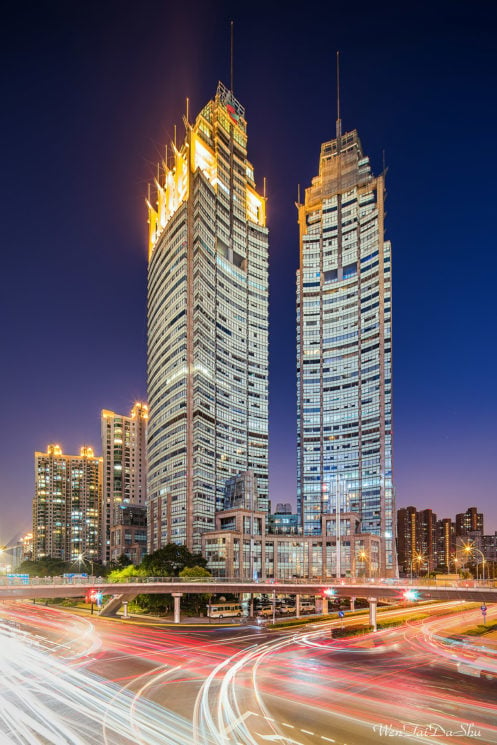 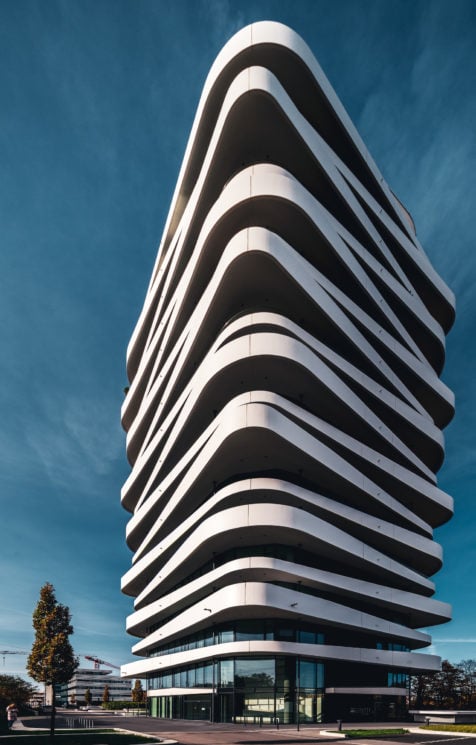 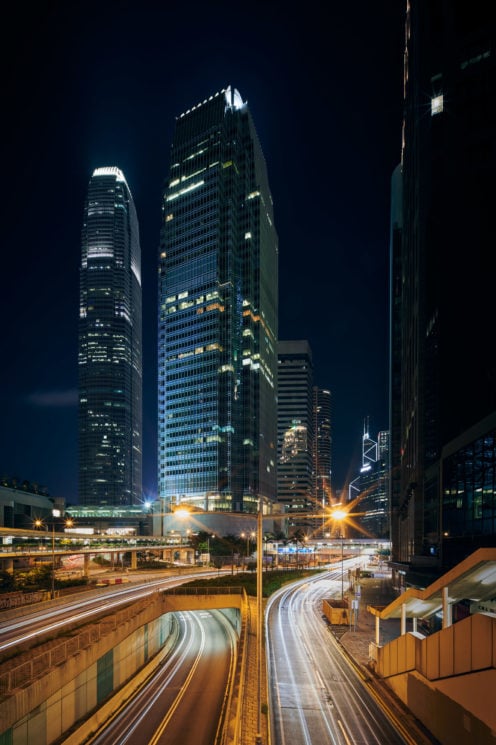 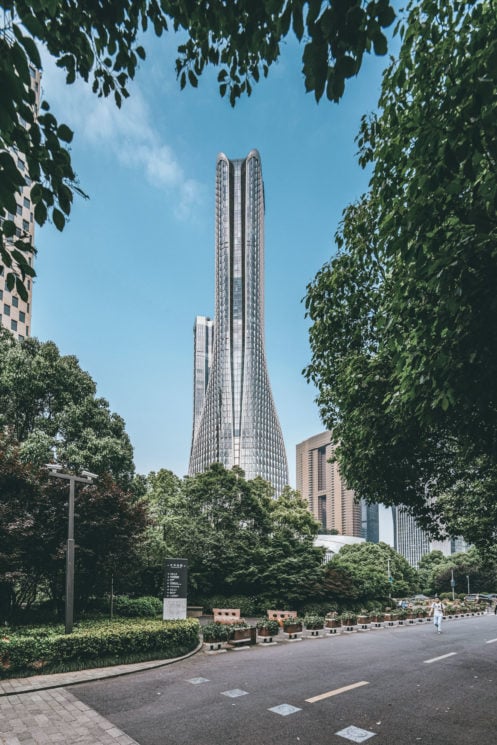 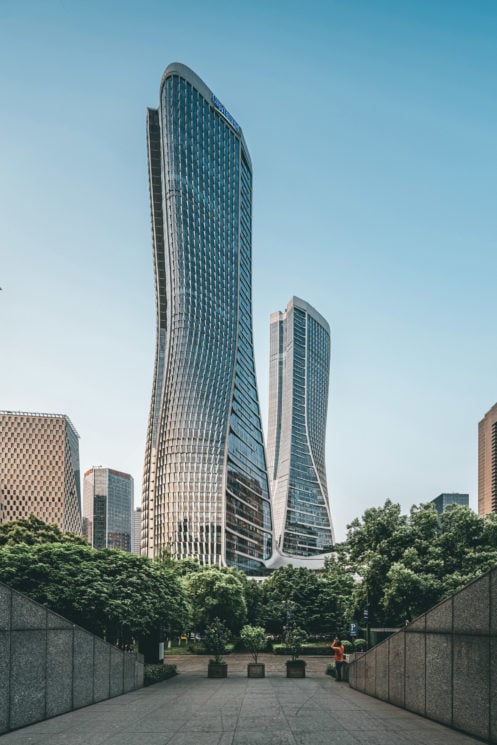 But it’s not just for big wide vertical shots, either. It also does extremely well you’re shooting horizontally, keeping the vertical lines vertical throughout the frame, even in tight interior spaces where you typically see the wider parts of the frame at some pretty severe angles when you’re pointing your camera slightly up or down.

You don’t have to target just individual buildings or rooms, either, as it copes just as well with wide exterior cityscapes, too, keeping everything pointing in the direction that it does in real life. 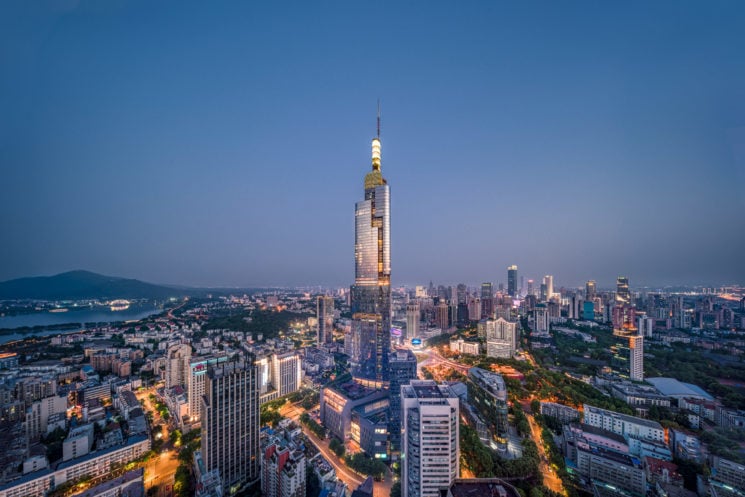 Shooting buildings isn’t all you can use it for, though. You can use it in any situation where you need a wide-angle field of view and need to correct for perspective based on the angle of your camera. Shooting in woodlands, for example, where you want to make sure that all those trees stay vertical. Or even product photography where you want a little of that close-up exaggerated look, but without it looking like the product is leaning towards or away from the camera.

Laowa says that their new 15mm f/4.5 Zero-D Shift is sharper than Canon’s 17mm f/4L TS-E (also popular with GFX shooters), with better chromatic aberration control and comes in at around half the price of either Canon or Nikon’s Tilt-Shift lens offerings. Of course, there’s no tilt feature on this shift lens, but if you don’t need tilt, then not having it isn’t something you’re going to miss, especially at this price.

The Laowa 15mm f/4.5 Zero-D Shift will be available to pre-order soon for $1,199. It will come in Canon EF and Nikon F mounts starting in late November, with Canon RF, Nikon Z and Sony FE mounts coming in Feb 2021. No word yet on when we’ll see the Leica L and Pentax K mounts. You can find out more about the new lens on the Venus Optics website.