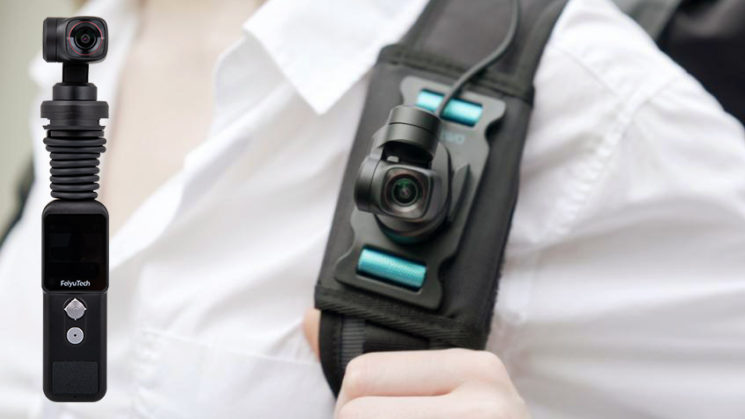 Feiyutech has announced the newest pocket gimbal, the Feiyu Pocket 2S. In normal operation, it acts similarly to practically every other pocket gimbal on the market, but this one has a detachable gimbal, allowing you to mount the head pretty much anywhere you like while allowing remote operation with the handle.

Separating the two doesn’t completely disconnect them from each other – there’s still a cable between them, but it allows you to attach the gimbal to clothing, helmets, or anything you like, really, without the handle getting in the way. It’s being launched via Indiegogo with some big Super Early Bird discounts.

Feiyutech says the Pocket 2S is geared more towards professional filmmakers and photographers who need to place gimbal cameras in small locations with 4K 60fps video at up to 120Mbps bitrates, a large f/2.0 aperture and 130° field of view. It also has supposed for an external microphone via Type-C adapter.

While it might seem like not much has changed since the original Feiyu Pocket when it comes to the specs, the Feiyu Pocket 2S does see a few new updates, like better low light performance, thanks to a new Sony BSI CMOS sensor as well as a Wide Dynamic Range mode and three hours of battery life. It also allow you to detach the gimbal head from the handle So, that’s new.

This ability lets you mount the gimbal to your clothes, a helmet, your vehicle or whatever you like while keeping the handle handy and out of the way. The base of the gimbal is also magnetic, which means you don’t need extra adapters to attach it to metal surfaces. 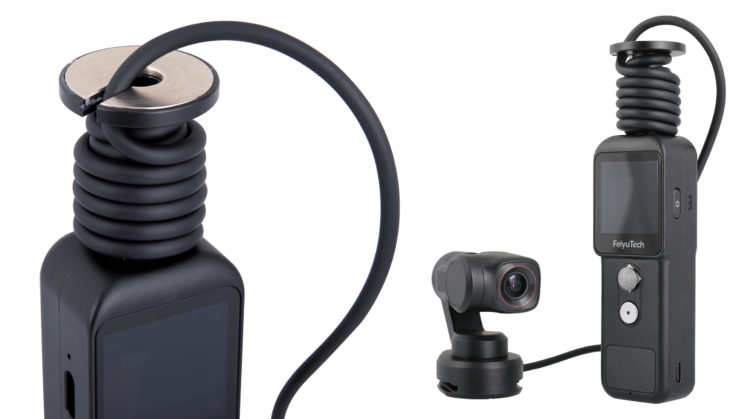 When the gimbal is detached, you still get the full 3-axes of rotation, allowing for some pretty smooth footage that would be difficult or impossible to get otherwise. It’s also extremely small. With the head removed, the handle isn’t even as big as your average smartphone these days, and the handle & head combined weigh less than the iPhone 12 Pro. 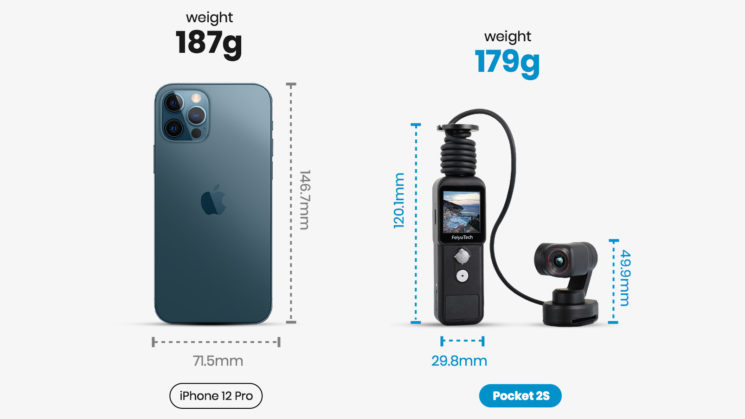 On the handle, you’ve got a 1.3″ 240×240 pixel TFT touchscreen UI along with a 5-axis joystick below to let you control various axes or switch modes. You’ve also got a shutter button letting you shoot a photo, start and stop video, return to the home page in the menus or turn the wifi on and off. The battery offers up to 3 hours of battery life when shooting 1080p or up to 160 minutes at 4K 30fps. No mention of how long it lasts if you’re shooting 4K at 60fps.

Files can be downloaded through the Type-C port or over WiFi to the Feiyu Cam App, letting you download, edit and share your footage right away. The Pocket 2S also features a micro HDMI port for playing straight back onto a monitor or TV screen – no word on whether this will output live to a monitor while recording, but I should be getting my hands on one soon, so I shall be testing if that feature is there!

It’s an interesting take on the “pocket” camera and I’m very curious to see if the other manufacturers of similar cameras plan to follow suit in the coming year or two.

For now, though, there’s only the Feiyu Pocket 2S. If you want to get one of your own or find out more, it’s currently available on Indiegogo with prices starting at $309 for the super early birds with shipping expected in October. Once it goes retail, it will cost $399.

« Pre-production: How cinematographers should prepare for a shoot
Adobe After Effects’ new Composition Profiler helps you to speed up your renders »