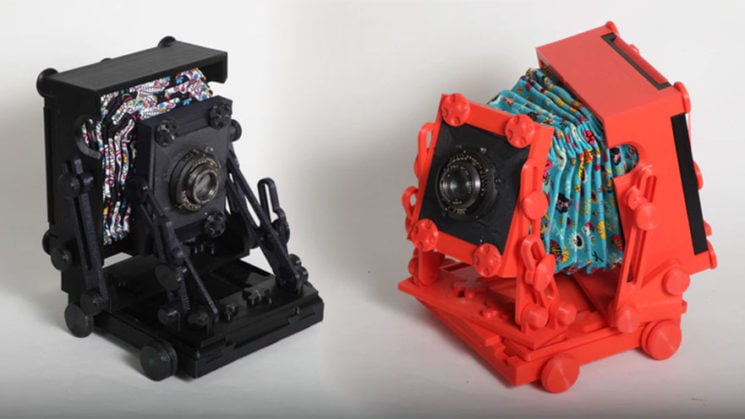 The other day, I posted on here about The Standard 4×5 large format 3D printed camera. I was a little sceptical about The Standard at first until I saw that the project files would be released into the open source world upon completion of the campaign and deliveries to backers.

Now, another new 3D printed large format camera has popped up on Kickstarter. The Cameradactyl. This one, though, won’t be releasing the files and doesn’t quite leave me with the same warm fuzzies.

You get a 3D printer, you pour your heart and soul into learning how to use it effectively. You’ve got to deal with build surfaces that don’t stick, build surfaces that stick too well, under-extrusion, bed levelling, layer shifting, z-wobble, warping, humidity in your filament, and countless other things in order to really get the most out of your printer and produce decent prints.

It’s a lot of work before you’ve even begun to design your first custom component.

Then you’ve got to learn how to use Fusion 360 or some other 3D software in order to design the components. There’s lots of test printing and waste (more expense) while you’re testing and tweaking and getting things just right.

So, it’s not surprising that some people don’t want to let their files out. Releasing the files to the world poses the risk that somebody will just set themselves up in competition with you, printing your own product. But this is where non-open-source 3D printed projects fail for me.

Even injection moulded plastic parts on something as complicated as a large format fiield camera can break. I wouldn’t trust 3D printed parts as much as moulded. And while the campaign promises that 3D printed replacement parts will be available, packaging and shipping costs can turn that $0.10 item into $10 very quickly. Not to mention potentially being unable to use the camera while you wait for things to arrive – that’s not gonna be fun for international customers.

The campaign also doesn’t mention the material in which parts will be printed. PLA, ABS, PET-G, Nylon and other filaments all have different properties. Different strengths and weaknesses that make one a better choice over the others for specific components.

I like the fun aspect of how the Cameradactyl is presented. Patterned cloth bellows and a pretty wild variety of colours – even within different components of the same camera. And it’s great to see large another new large format film camera, and I wish them well in their project. But this is something we’ll also be able to do ourselves with The Standard on our own 3D printers once the STL files are released – and we’ll be able to modify it and make our own additions to it.

It’s already hit its goal on Kickstarter, and the design phase is over, so if you have backed it or choose to back it, then you’ll probably get your camera – eventually. And although 3D printed parts can be quite solid, this is not always the case. That uncertainty and the lack of being able to print my own replacements really puts me off this project.

I’m curious how the Cameradactyl and The Standard will compare in the future. They’re both at about the same stage in their life right now – the Kickstarter stage. One is going open source, and the other is not. It will be an interesting comparison to follow.

If you want your own Cameradactyl 4×5 camera, head on over to Kickstarter, where pledges currently start at $225.

The Chroma is a new and unique large format technical camera

« Quick Photoshop tip: how to remove unwanted color cast in only a few clicks
How a model release turned an author into the poster child for…everything »