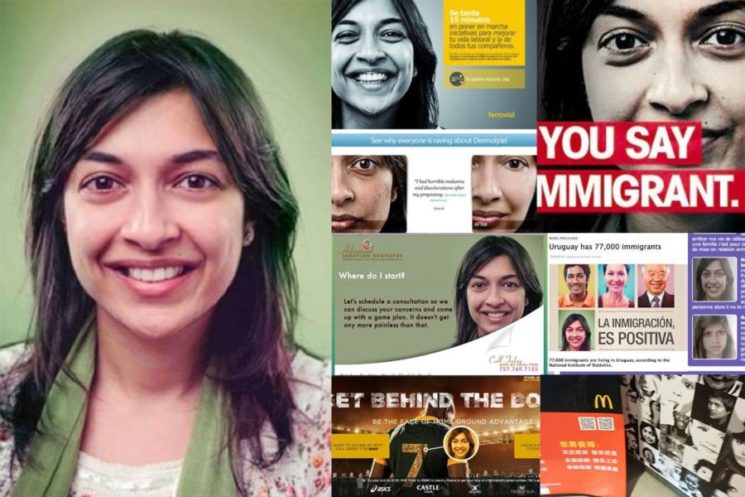 While a university student, author Shubnum Khan signed a model release in exchange for professional portraits as a part of a project by photographer XX billed as “The 100 Faces Shoot.” Unbeknownst to her at the time, the photographer started licensing the images as stock photography, and Khan’s visage started to appear in advertisements around the world selling everything from McDonald’s hamburgers to hyper pigmentation cream to management course materials.

In a Twitter thread, Khan explained how a friend notified her that her face was being used to promote immigration in Canada, and how a reverse image search revealed how widespread the use of the image was.

In many locales, so-called “personality rights” allow individuals to control their “right of publicity” – a legal right that allows an individual to control how their likeness is used commercially. Without seeing the fine print of the model release she signed, it’s impossible to speculate whether all the licensed usages were, in fact, legal in all jurisdictions and for all uses. Releases often prohibit using a model’s likeness for controversial topics like cigarettes, adult content, etc without explicit permission from the model.

While Khan didn’t object to some usages (e.g. immigration), she was shocked at how the image was used in conjunction with fake testimonials.

So beside the fact that all of us were never paid for ANY of these advertisements, there's also the misleading and downright dishonesty of promoting these products. Eventually I contacted the photographer and said I didn't know I signed up for any of this, pic.twitter.com/ocpacnYd0W

And then suddenly all this facial work has you getting attention and you're Dina M, with a baby and post pregnancy melasma until Dermolyte comes to the rescue and gives you photoshopped finished skin. pic.twitter.com/uC0BXZfiwU

According to Khan, the anonymous photographer has stopped licensing the image, but a reverse image search revealed how widespread the distribution was including royalty-free stock sites like Shutterstock, Bigstockphoto, Dreamstime, 123rf and more. 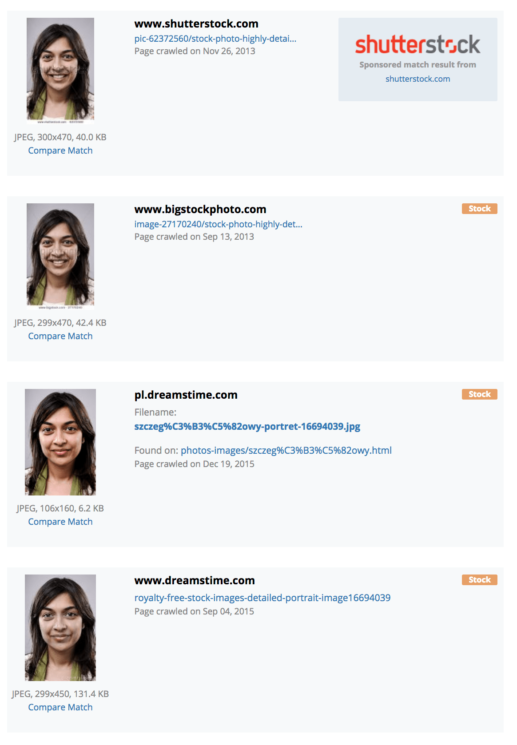 Khan has no plans to file a legal action against the photographer, but she does see the incident as a cautionary tale against “time for print” arrangements between photographers and non-professional models. “Don’t sign up for free photoshoots, read what you sign and also don’t believe most of the things you read on the internet.”

life in a small town in S Africa not knowing about how her image is being used. So, if anything use my story as a cautionary tale. Don't sign up for free photoshoots, read what you sign and also don't believe most of the things you read on the internet.