Large format film is something that many photographers would like to experiment with if it wasn’t such an expensive way of shooting. There are a number of great inexpensive options out there for cameras, like those from companies like Chroma, but the film is still relatively expensive. Even black and white film can work out to almost $2 per photo – and you don’t even know if you’ve got the shot until you’ve developed it.

But what about photographing what that large format camera sees with your DSLR? Will it still give you the same look that you’d get if you’d shot with the large format camera? That’s a question that photographer Bill Lawson explored over this three video series to see if he could find a definitive answer.

The idea of shooting the ground glass is quite simple. The image is projected through the large format lens and onto the ground glass where it shows the view you’d get if you were to insert a sheet of large format film and fire the shutter. So, photographing it, naturally, gives you that same look, right? Well, ground glass isn’t perfect, as Bill mentions in the videos. It vignettes as you go out towards the edges, so it needs a little assistance.

In Bill’s case, he used a Fresnel lens to help focus the light more evenly onto the ground glass. Then, when he photographed the ground glass with his DSLR, he got a nice even spread across the frame. Bill eventually removed the Fresnel lens, as it produced other issues in the images, which you can see below, and decided that the vignette was easy enough to correct in Adobe Camera Raw.

It’s not a new concept, and it was one commonly practised by 35mm adapter manufacturers like those from Letus. Letus produced a Nikon 35mm adapter for the Sony EX1 which allowed F mount lenses to be used and allow the EX1 to record what you’d see if you were shooting with that Nikon lens on a full-frame 35mm body. The 3D printable Goodman Art adapter, allowing you to use 35mm lenses on your smartphone also uses the same principle. 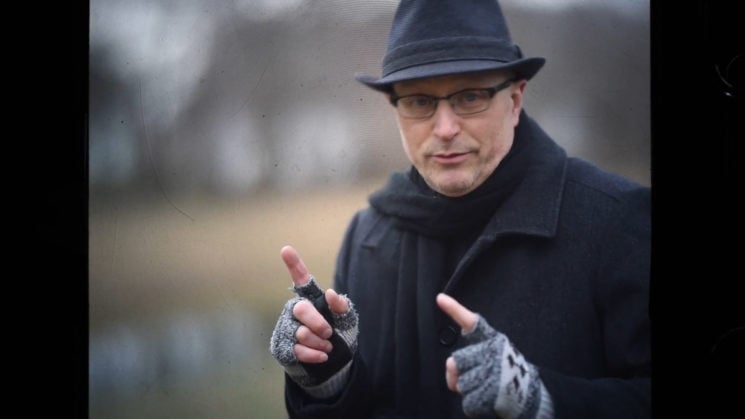 The one problem you face with this method, though, is that the DSLR often picks up the texture of the ground glass focusing screen – or, in the case of the above image, the Fresnel lens. Also, because you’re focusing on the glass (and not your subject – the large format camera’s doing that), you see every hair and speck of dust that also resides on the glass, so it needs to be kept perfectly clean.

The Letus adapter got around this by spinning the ground glass and also moving the glass as it spun. A bit like a random orbital sander. This prevented repeat movements from showing up to the camera and essentially removed those issues. In the same way that a random orbital sander spins and moves in order to prevent obvious scratches from appearing on the surface that you’re sanding.

That’s not exactly easy with a large format camera.

It is a very interesting idea, though, and as long as you can keep your ground glass absolutely spotless, and you have one with a surface texture so fine that your camera can’t really discern an obvious pattern, then it can produce some very interesting results.

Will it look the same as shooting with 4×5 film? No, it won’t, but it does offer some unique looks, and if you’re shooting video, it offers a perspective you probably wouldn’t be able to get any other way.

For stills, though, there are other options. At least, there are if your subject isn’t moving. There are a number of backs out there for 4×5 large format cameras that allow you to attach a DSLR to it directly. The idea here is that you shoot a number of images with your camera, moving it to a different position for each shot, and then stitching them together in post. 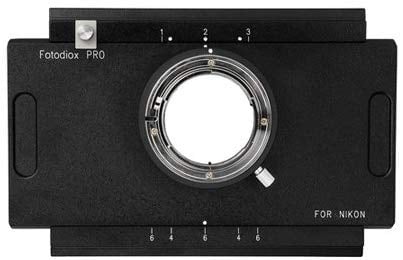 With this adapter method, the image is projected directly onto the camera’s sensor, so you get rid of all of the issues of shooting the ground glass (hair, dust, texture, etc). But, as you have to do it over multiple shots, it’s not going to work for moving subjects. Even for portraits, no matter how still your subject tries to be, there’s going to be some movement from one shot to the next. For landscapes, though, it should work extremely well.

If you’ve wanted to try large format, though, both Bill’s technique and the dedicated SLR adapter are options that might be worth exploring and experimenting with. At least until you cave and just buy some sheet film.

Have you tried either of these methods?