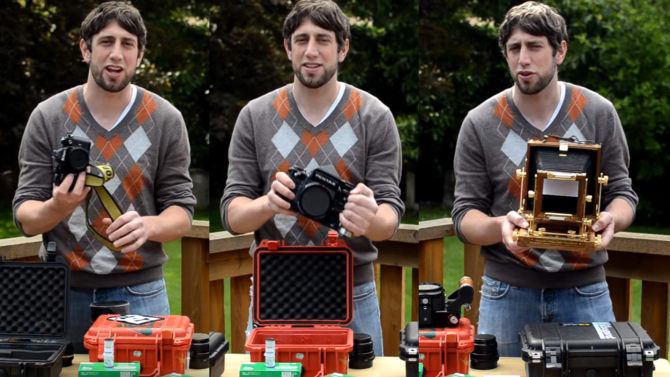 Shooting film is often seen as more of a novelty these days. Once, it was just the way photography was done. For those who started off in the digital world, the idea of shooting film can feel quite alien. Understanding the different formats and the effect they can have on the image can be difficult concepts for beginners to wrap their head around. And when it comes to developing their own film, that’s just too much for some folks to handle.

In this series of videos from Stefan Litster, we’re taken through the basic process of understanding different cameras & formats, as well as how to develop our own film. The series started about three years ago, with sporadic updates, but was recently revived on Reddit, and it appears that Stefan has started posting to YouTube again in the last few months.

Episode one talks about the three main different formats of film cameras. 35mm, medium format, and large format. Stefan heads out with a friend to go and shoot each of the three cameras to highlight the differences in how they work and the results they can offer.

But once you’ve shot your film, what’s next? Developing. Fortunately, if you’re shooting black & white film, developing the rolls yourself is pretty straightforward. It can easily be done in your kitchen, bathroom, or wherever you have the space. I often develop my own film sat on the couch while watching movies.

Episode three talks about instant film. Unfortauntely, the Fuji FP-100c film Stefan mentions in the video isn’t being made any more. But, there are still old stocks available online if you look hard enough. New55 are also currently preparing to bring out some new large format peel apart film, too.

The last video I want to show you is a little later in the series, at Episode 7, but if you start shooting 35mm with any kind of regularity it’s worth doing this. I switched over 100ft bulk rolls of 35mm film a few years ago, and it’s saved me an absolute fortune. With 36 exposure rolls in the store reaching the equivalent of almost $10 each near me, and developing costing almost twice that, it’s a big money saver.

If you do decide to take up shooting film, you’ll want to do some more research. But, this is a great series to introduce you to the some of the aspects of shooting with film of various sizes and formats.

You can watch all 10 videos here, and now that Stefan seems to be back, hopefully more will be added in the coming weeks. So, head on over and check it out.

Do you still shoot film alongside digital?. Are you 100% film? Are you a digital shooter that’s been thinking about getting into film? Have these videos convinced you to give it a try? Let us know your thoughts in the comments.