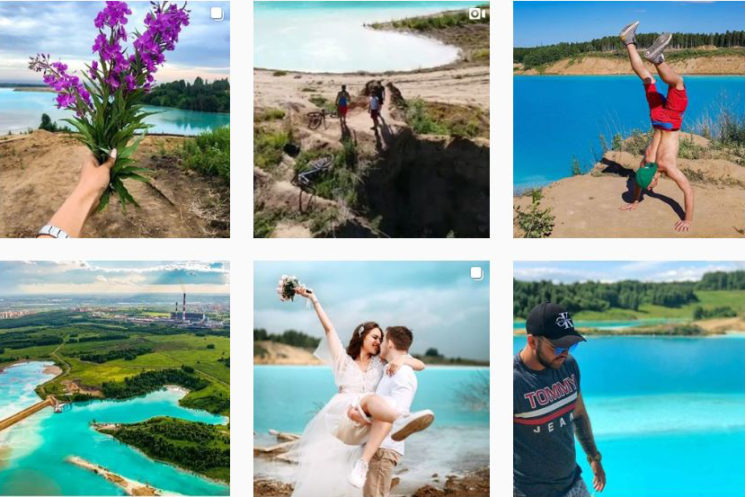 People of Instagram would do anything for likes, no matter how dangerous, disrespectful or stupid it is. The latest trend on Instagram is taking photos near or in “Novosibirsk Maldives,” a gorgeous azure lake in Siberia. The problem is that a nearby coal plant uses this artificial lake to dump ash, so it’s heavily polluted. But it seems that the Insta-craze has gone so far, that the company running the plant had to issue an official warning against swimming in it.

So, there are several possible dangers to swimming in this lake. First, you’re likely to get an allergic reaction, which is a lesser evil. An even more serious danger is getting stuck in the mud on the lake’s bottom. Still, people don’t seem to take the warning seriously, and they keep snapping all kinds of photos by the lake or in it. From cliché “oh look how cool and free-spirited I am” Instagram shots, to wedding and engagement photos.

The “Novosibirsk Maldives” seems to be so popular on Instagram, that one user even created a fan account which features photos taken at the lake. He told CNN that he has visited the place five times and plans on going more, but he knows that the water is toxic, so he doesn’t touch it. Of course, not all people care about the fact that the water is polluted.

One Instagrammer posted a photo of himself riding an inflatable unicorn in the lake. The caption reads that it’s not dangerous to swim in the lake. “The next morning, my legs turned slightly red and itched for two days, then everything was gone,” his post reads when roughly translated. Dude, that is the allergic reaction the company officials are mentioning, but okay. “But how can you not go in for the sake of taking photos like this?” He adds that the water tastes a bit sour and looks like chalk. Don’t know ‘bout you, but I’m really not into getting an allergic reaction in exchange for Instagram likes.