Created from 105 individual exposures taken over many hours, “New York Transitions I” captures the dawn of a new day in New York City. I wanted to portray the magic of the skyline at both nighttime and daytime in a single image so I planned to create a VAST photo that transitioned from night to day as you move from left to right in the image. Furthermore, I wanted to create the photo at a special time when the city looked particularly radiant, so I waited for a snowstorm to gild the city in white…

Heavy clouds thick with snow blanketed the sky on an unusually cold morning. After reviewing the forecast for many inches of snow followed by a sudden clearing of the sky at night, I decided to prepare for a photoshoot of the city from the top of one of the tallest buildings between downtown Manhattan and the iconic Midtown Manhattan skyline.

As the day turned to night, the snow continued falling, coating the usually-dark rooftops of the city with a sheen of white powder. Then, in a matter of minutes, the snow ceased and the clouds whisked away to the east, leaving a perfectly clear sky. The moonlight sparkled off of the snow-covered buildings and the clear atmosphere provided amazing views for miles in every direction. The city stretched before me, filled with glowing windows, energetic arterial avenues, and Saturday-evening festivities. 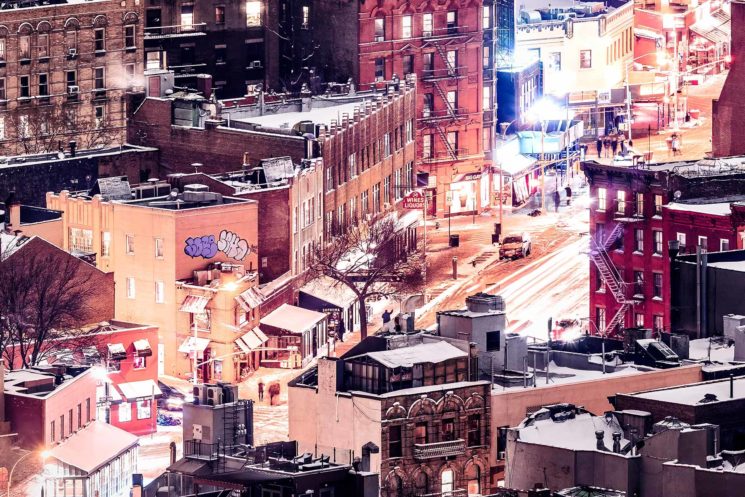 Reveling in the scene, I began exposing the long-exposure images that make up the left-side nighttime portions of the final photo. The fervor of cars racing up the avenues into the heart of the city rendered a beautiful glow on the buildings. Over the course of two hours, I meticulously recorded every last high resolution detail of this nighttime winter wonderland using a long telephoto lens mounted on my Canon 5Ds which I rotated using an extremely precise gimbal. 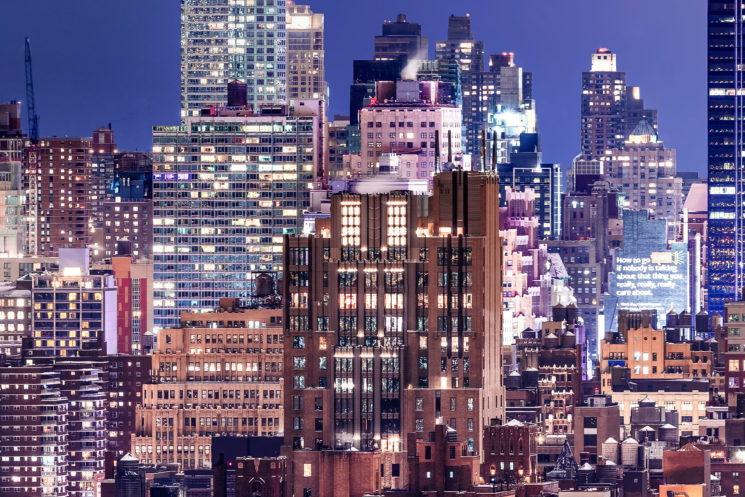 The sky began to illuminate with the faint glow of the swiftly oncoming sunrise and so I started shooting the regions of the image to be used for the center and right sections of the final photo. The sky grew brighter with each passing minute, casting the entire city in a heavenly light. Complementing this were the typically-drab rooftops that were now shining with their thick coats of bright white snow. A handful of cars meandered up 6th avenue, some early-risers strolled down the West Village’s sidewalks, and plumes of steam danced from faraway rooftops. The storm had quieted some of the usual activity, so the city was even more peaceful than it normally is on a Sunday morning. 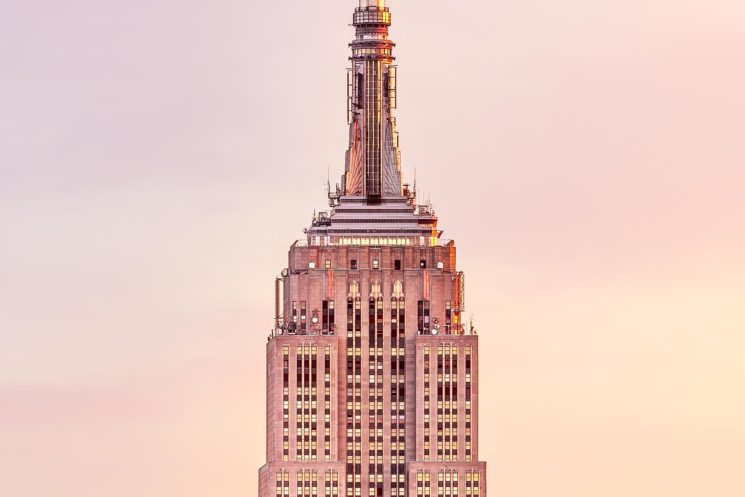 As sunrise transitioned to daytime, I wrapped up shooting the very far-right sections of the image and packed up my equipment. Then began the long process of stitching and blending the 105 raw images into a final polished VAST photo. No detail was left untouched during this arduous process that took me well over 100 hours due to the exceptionally high resolution of the photo’s canvas.

It was time well spent because the clarity of the final VAST photo cannot be overstated. Buildings many miles away are clearly visible; tiny details such as people walking down the sidewalks are easily discernible; fascinating rooftop structures covered in snow drifts are revealed in striking resolution; facades of numerous architectural masterpieces such as the Empire State Building are exquisitely rendered; and the diverse characters of famous New York neighborhoods like the West Village, Chelsea, SoHo, and Gramercy can be palpably felt.

Details like these fill every nook of this VAST photo, nestled among the melodic rhythm of the city’s iconic skyline transitioning from night to day.

Dan’s passion for photographic artwork began when he was still a child. His desire to push the technological envelope subsequently led him to begin exploring novel uses of digital imaging technologies. After years of research, development, and engineering, Dan has honed a unique set of techniques for generating exceptionally high quality images with distinctive aesthetic qualities. In 2017, Dan built and launched VAST, a company devoted to advancing the art and craftsmanship of ultra high quality image-making.

If you’d like to see more of Dan’s work and high-quality images, make sure to visit his website, and follow Dan’s work on his Instagram profile. If you wish to explore “New York Transitions I”, you can do it by following this link.