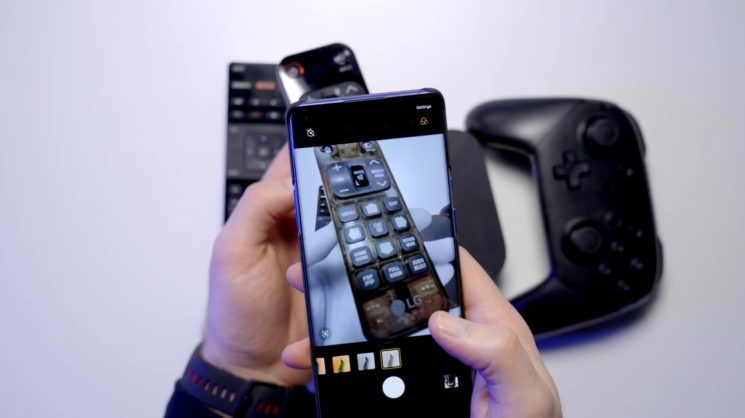 OnePlus-s latest flagship phone, OnePlus 8 Pro, was announced only a month ago, promising pretty stunning camera performance. But it seems to be even cooler than we thought. While there weren’t too many details about the phone’s “color filter camera,” it turns out that it has a sort of X-ray vision. It can see through some plastic objects, and even through clothes!

The OnePlus 8 Pro packs four cameras, two of which are 48-megapixels. The one we’re concerned with is the “color filter camera,” a 5-megapixel camera that can be used for applying all sorts of unique filters to your photos. However, when you use the Photochrom mode, you use this camera’s filter for infrared photography. And this is when it becomes interesting.

People began to notice that you can use OnePlus 8 Pro’s Photocrom mode to see through some objects. More precisely, it sees through thin plastic of remote controls, Apple TV, game controllers and so on. Check it out in this video from Alan Goodwin:

It appears that the thickness of plastic depends whether the camera will be able to see through it or not. It can easily reveal what’s behind a thin layer of plastic, but it doesn’t show you what’s hidden behind a thicker one. And now we get to the creepy territory – can it see through clothes? Judging from this test by
Unbox Therapy: yes, it can.

The OnePlus 8 Pro can see through some fabrics like thin black clothes. My DIYP buddy Paul Monaghan reminded me that Sony used to sell camcorders that did the same thing, and I have a dim memory about it too. Sony had a “Night Vision” mode on one of their handycams, and Lewis of Unbox Therapy mentions it in the video above as well. In later versions of the camcorder, Sony removed the feature because it caused a lot of controversy.

The question now remains: what will OnePlus do? The “color filter camera” sure has some cool applications and it makes the OnePlus 8 Pro stand out from the competitors. On the other hand, you can only imagine how the feature can be misused. I read in a few places that this feature can be difficult to alter through software update. Therefore, if OnePlus decides to address the issue, they might need to give up the color filter camera completely. Now we can just wait and see how the story unfolds and how OnePlus will deal with the potential problems or misuse this camera can cause.