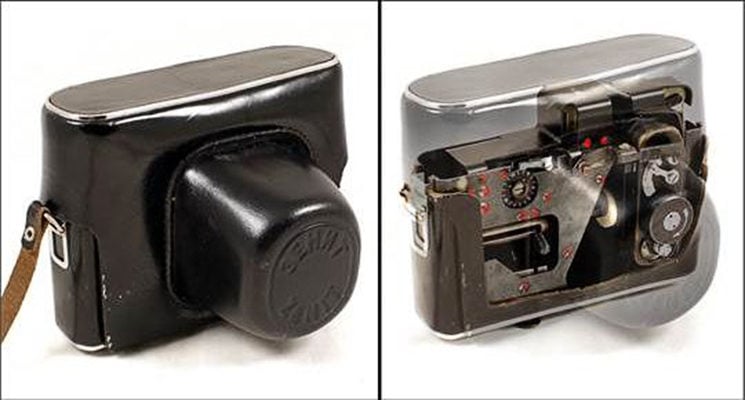 From vintage golden rings to lifelike animals, hidden cameras come in many interesting shapes, sizes and purposes. But in a recently sold collection of Russian spy cameras at Aston’s Auctioneers in the UK, one of them caught my eye. It’s a spy camera disguised as – a camera. Sometimes works best to hide things in the most obvious places, and this is a perfect example.

At the first glance, the camera seems like a normal Zenit E in its case. However, it hides a miniature F-21 AJAX-12 spy camera. The F-21 AJAX-12 is mounted so that the 28mm f/2.8 lens is pointing out of the side edge of the case.

Photographic consultant to Aston’s, Tim Goldsmith, told Bloomberg that this “cameraception” was his favorite of the batch. However, it was also the only one he couldn’t figure out how to use. Eventually, he even contacted KMZ, the manufacturer of this spy camera. And only after contacting them he learned how it works.

As you could have probably guessed, this isn’t a regular Zenit E camera. There’s a small button on the bottom of the case meant for secretly taking photos. Since the lens of the F-21 AJAX-12 is mounted on the side, you get to take photos at a 90-degree angle. When you press the small button, the internal mechanism raises a hidden internal flap. The camera shutter fires and the flap immediately closes.

So want’s the deal with this mechanism? Well, it allows you to take photos secretly while it appears that your camera is casually hanging over your shoulder, resting in its case. Clever, isn’t it? The camera disguised as a camera was estimated at £150 to £200. However, it was sold for £3,300. The lucky buyer can pair it with a classy umbrella, a pack of cigarettes and a golden ring – and spy away.

This vintage Russian spy lens is perfect for portraits, and it costs $40

Photographer Cleverly Captures His Own Proposal With Timelapse Trickery

« Here are seven things they did not tell you before you bought the Sony A7III
These are the advantages and challenges of shooting portraits with a 50mm f/0.95 lens »