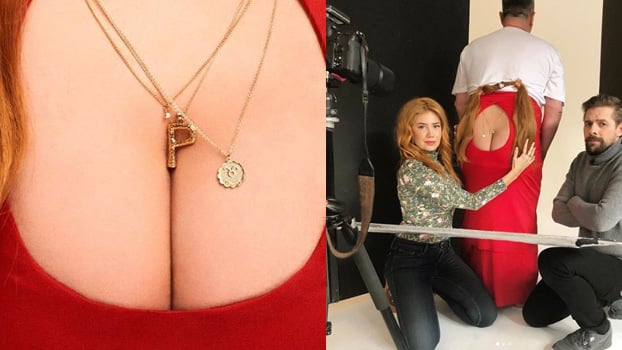 There has been a diptych going around Facebook lately which has made me laugh every time I’ve seen it. Perhaps you’ve seen it too: there’s a woman’s cleavage in one photo and the BTS image in the other, showing that the “cleavage” is actually a man’s butt crack. The photo has gone viral and quickly turned into a meme, but there’s a story behind it that’s even more epic than the idea itself.

German actress and model Palina Rojinski is the person behind it. Being fed up with vulgar comments on her Instagram photos, she thought of this prank to troll the perverts who have been harassing her online.

[Note: this article contains photos of a male butt crack disguised as a female cleavage. So be mindful about where you read it : ) ]

Palina has been receiving tons of comments regarding her physical appearance, many of them being very explicit and disturbing. It has gone so far that even some German press posted “news” about her “showing her cleavage.” Oh man.

It’s a lot to put up with, but Palina had a brilliant idea how to fight back. She teamed up with her friend Klaas Heufer-Umlauf, who hosts the German talk show Late Night Berlin. They organized a professional photo shoot of her cleavage – only it was her buddy Bernd’s butt crack that was actually photographed. They tried a few different outfits and even added her necklaces and some hair to make it look more realistic. In the end, they opted for the red version, and Palina posted it to her Instagram with the title “Finally a nice necklace with my zodiac.” Nasty comments in 3, 2, 1…

I won’t cite the comments because even I am too embarrassed to repeat what these men wrote (and I am not easily embarrassed). However, one of them actually cracked me up (no pun intended): “I would like to put my head between these.” I honestly laughed out loud. Other than receiving tons of explicit comments, Palina’s breasts ended up in the press as breaking news once again. Only it’s not her cleavage in the photo, but hey, I guess they earned some clicks anyway.

You can see the photo shoot in the video below (turn on the English subtitles). Just keep in mind that there’s a male butt crack in various dresses in the video, so viewer discretion is advised. : )

As I mentioned, the final photo and the BTS shot quickly went viral after Palina published them. I especially like the “client expectation vs. client budget” version, which I saw a lot on photography and filmmaking pages I follow.

Honestly, I think this idea is brilliant. I believe that all the guys who had left explicit comments felt like idiots once they realized they were drooling over a guy’s butt. I can imagine how unpleasant and difficult it is to deal with lewd comments all the time, and this certainly is one way to shame the guys who write them. So, my hat’s off to Palina for her spirit and her witty way of dealing with pervs on Instagram.

« This insane editing machine supports four Nvidia Quadro GPUs, 2 Xeon CPUs, 1.5TB RAM and can cost over $100,000
The Godox V1 goes head-to-head with the Profoto A1 in this side-by-side comparison »