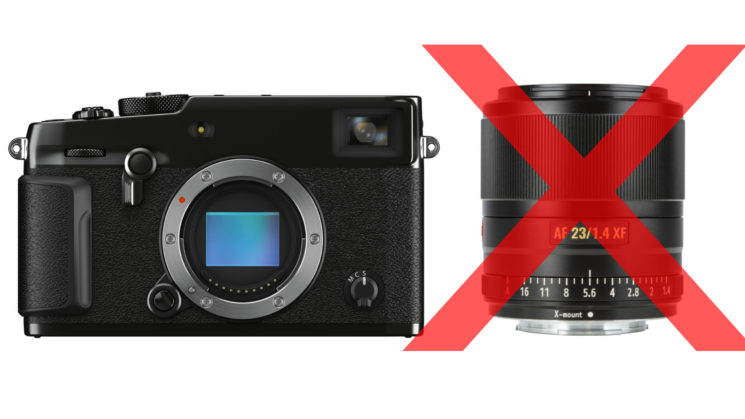 Viltrox has just issued an official statement that some of their lenses can damage your Fujifilm X-Pro3. So, if you use this camera, you might not want to pair it with Viltrox 23mm f/1.4, Viltrox 33mm f/1.4, and Viltrox 85mm f/1.8.

According to the statement, these three lenses don’t agree with the X-Pro3. “Due to the structural conflict, they will scratch a little big against each other,” Viltrox writes. Fuji Rumors explains the issue a bit further, adding that the problem is in X-Pro3’s lens release button which is too close to the bayonet.

The damage is merely cosmetic and won’t affect your camera or lens’ operation in any way. Still, if you’re anything like me, then you don’t want your precious camera to have one single scratch. So, in the Viltrox’s words, “for the sake of your camera, it would be better not use Viltrox 23mm, 33mm or 85mm X mount lens onto Fujifilm X-PRO3 model.” It’s worth noting though that these lenses still work perfectly with Fujifilm X-T3 and X-T4, without causing any damage on them.

Fujifilm X-Pro3 is officially out, and it draws inspiration from old film cameras

« This video shows a drone flying dangerously close to military jets
Spy camera comes to phones with the OnePlus8: its camera sees through plastic and clothes »