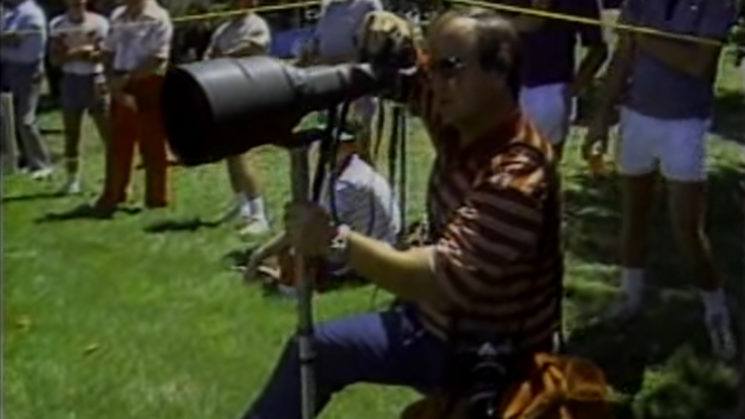 This video recently surfaced on Reddit, after it was discovered by user TheKnightLife. It was featured in the 80s on ABC in the show “World of Photography”. As it turned out, the profile was on TheKnightLife’s father, sports photographer Bill Knight. Bill says in the video that he’d been on the tour for about 13 years, which his son believes puts the video at sometime around 1985.

Bill retired in the early 2000s after never fully recovering from a double knee replacement surgery due to osteoarthritis. He passed away in August, 2015, but this video serves as a good memory of how dedicated he was to his photography. And the passion he obviously had for it.

Also in the video is a brief interview with professional golfer and PGA Tour winner, Lee Trevino. It’s interesting to hear about the relationship between the photographers and the players. It’s one that doesn’t seem to be as common today. As more competition enters the photographic field, and organisations drop their staff photographers to cover events, the relationships just don’t often get built any more.

He’s the best, this guy. He’s friendly, you see. Once you make friends with all the players like he has done… There’s a zillion people that are around taking pictures, but Bill Knight has kind of been a fixture on tour for a long, long time, and he becomes friendly, and he’s nice to all the players.

So, when you do that, then you kind of feel when he needs a picture of some kind, and he comes an asks you, you feel an obligation to him.

I photographed a golf tournament myself once, at TPC Prestancia in the early 2000s, and it’s not easy. Fortunately, I did have my own cart to lug gear around the course and zip from hole to hole throughout the event. Without one, I don’t think I’d have lasted the whole day carrying that gear. It’s a type of photography I instantly gained a lot of respect for, as well as for those who shoot it.

It was a heck of a lot of fun, but I couldn’t have done it full time, and definitely not for the number of years that Bill did.

Do you shoot professional sports? Which sports? Are the relationships between photographer and player as strong now as they were then? Or is there too much photographer saturation today to build them the way they did 30 years ago? What sport would you like to photograph if you could? Let us know in the comments.

How to shoot ’80s-themed colorful portraits on a budget

“We got that B-Roll!” is a hilarious 80s commercial style take on buying stock footage