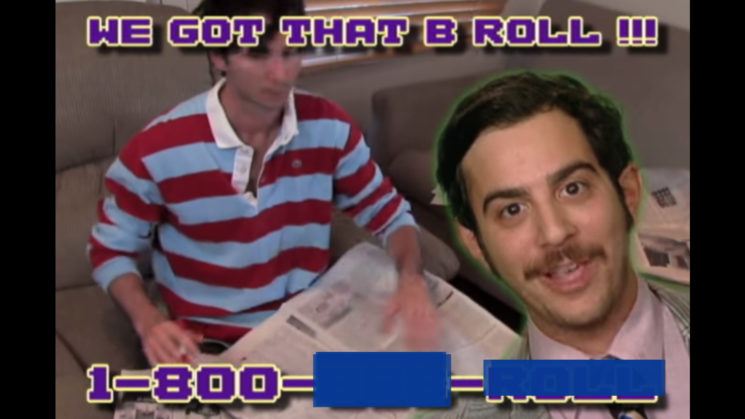 B-roll is a fact of life for anybody shooting or editing video. It’s essential. Whether an interview, talking head piece, or something a little more cinematic. It helps to break up the monotony of a single shot, it adds context, perhaps injects a metaphor or two. Many of us will film b-roll ourselves during the course of our production.

Sometimes, though, you need a clip that you just can’t shoot yourself. That’s where stock video libraries can step in to save the day. Do you need two men pointing at an office file? An angry man stuck in traffic? Happy couple walking on the beach? “We got that b-roll” has everything you need. Created by the team at Cream Sketch Comedy, it’s a very humorous take on the topic.

Stock video, like stock photography, has its fair share of clichés, and many of them are covered in the short video. Like, the overwhelmed man trying to pay bills, doctor talking to smiling patient, the couch potato channel-surfing the TV. They’re regularly used in the world of advertising, especially low budget late night TV advertising. And it’s not uncommon to see the same actors, and even the same clips promoting multiple products or services.

B-Roll is also used in movies and TV shows all the time.Most of it goes completely unnoticed. Sometimes, though, it’s easy to spot. The colour or contrast won’t quite match the rest of the show, or the quality will be slightly worse. Occasionally stock footage shot at one frame rate will need to be conformed to match the rest of the episode.

It does make you wonder just how much b-roll is used that we don’t spot, though.

Filmmaker inserts himself into stock photos for this hilarious music video

« This vintage lens produces cinematic videos and stills, and you can get it for under $50
This gorgeous timelapse was created in 4 months from items we all have at home »