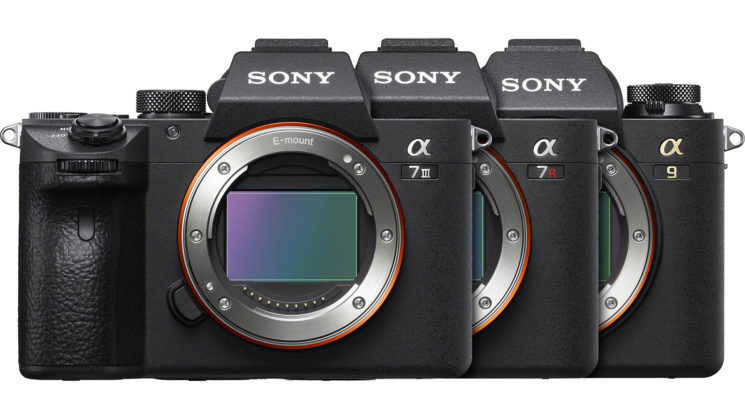 It looks like Sony are taking a leaf out of the Fuji playbook by introducing new substantial features through firmware updates rather than entirely new bodies. The Sony A9, A7RIII and A7III are about to get quite a significant feature upgrade with new firmware updates coming out over the next few months.

The first firmware update for the Sony A9 is due in March bringing the realtime Eye AF performance expected in the newly announced Sony A6400. The Sony A9 will see Animal Eye AF added in a second update coming in summer. The A7RIII and A7III will also receive these updates in a single firmware in April.

So, first up, the Sony A9. There are two firmware updates coming for the A9. The first is to be released is version 5.0 and will come in March and adds Sony’s newly developed realtime tracking mode for object tracking. It processes colour, distance, pattern and spatial information to increase the speed and accuracy of the autofocus system.

Essentially, this means that the A9 will receive Sony’s newest Realtime Eye AF system. In all autofocus modes the camera will automatically detect hte eyes of a subject and Eye AF is activated with a half press of the shutter. Sony says that the camera “will seamlessly track the eyes at all times” while you’re using AF-C mode. And you can also set a preferred (left or right) eye to track on your subject wherever possible.

Other focusing capabilities that will be available with the new firmware include Touch Pad, Touch Tracking, an extended phase-detection AF aperture range that has been increased from F11 to F16, and Fast Hybrid AF for movie shooting that provides smooth, automated focusing for movies.

Image quality has also been enhanced, especially when it comes to colour reproduction. They say that it will offer smoother and more natural tonal gradations in things like skies. So, bye bye banding. At least, in theory. The auto white balance system has also been improved.

Along with the new firmware update comes a new mobile app. The existing PlayMemories Mobile app is going to disappear, which I don’t think will upset many people, to be replaced by a new Imaging Edge Mobile app. The new app offers a “Transfer & Tagging add-on” to assist in workflow, offering easy transfer of images from the camera to the phone, and adds support including IPTC metadata on transferred images.

Version 6.0 of the Sony A9 firmware will be coming during the summer of 2019 and brings Eye AF for animals, along with interval shooting functionality for creating timelapse – which is definitely something that a lot of Sony shooters have been missing.

The Sony A7RIII and Sony A7III are only receiving a single firmware update, however it includes the new Realtime Eye AF system as well as realtime Eye AF for animals. The timelapse features mentioned above are also coming to the A7RIII and A7III in this update, too. Firmware for both cameras is expected in April.

Sony does mention a caveat or two, though. The Eye AF for humans and animals “may not be achieved with certain subjects in certain situations”. This should be fairly obvious, though, especially when you consider how many different types of animals there are out there and the different types of eyes they have. Not to mention potential makeup issues with human subjects.

See the full announcement on the Sony Alpha Universe website.

« How to make & use a single DIY globe modifier for simple, stunning portraits
Travel photographers, beware of this international scam that tricked 100 people so far »