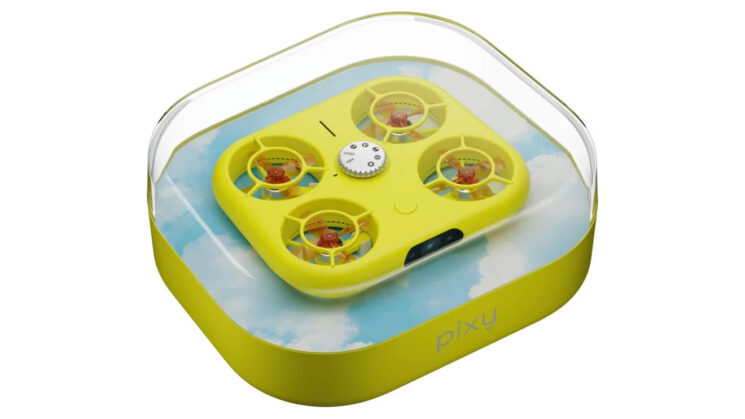 Snap Inc, owners of Snapchat, have released their new Pixy drone. It’s a tiny “pocket-sized” drone designed specifically for shooting content on Snapchat. This little plastic drone (a term which Snap doesn’t use once in the press release, preferring “flying camera”) doesn’t come with a controller, as it’s designed to basically fly itself and you use the Snapchat app to tell it what to do.

It’s certainly not going to be any kind of competitor to companies like DJI or Autel but for Snapchat users who want a flying selfie camera? Perhaps. Snap says that it offers everything users need “to capture the moment from a new perspective” without having to hold a selfie stick or drag an extra person along just to hold the camera. It weighs only 101g, so falls well under the 250g drone rules and costs only $229.

The Pixy drone is described as a companion to Snapchat. It sports a 12-megapixel camera which shoots stills or 2.7K video to its 16GB of internal storage. They say it can hold up to 100 videos or 1,000 photos before it gets full. Your photos and footage are then transferred wirelessly over to the Snapchat app. From there, you can edit, use Lenses and Sounds to customise it and then post it into the ether.

We first created Snapchat as a new way to use the Camera for self-expression and communication. From Lenses to Spectacles, there are so many ways to share your perspective. Today, we’re taking the power and magic of the Snap Camera to new heights.

The camera is essentially automated in its flight, with fully enclosed propellor blades so that they don’t mangle your fingers when you attempt to launch it up in the air or catch it. Snap says that the Pixy will find and follow you wherever you are before “landing gently in your hand”.

It’s a neat idea for Snapchat users who cant’ be bothered with a selfie stick and just want something that can follow them around while they do their thing and it seems that you can actually post the footage to other platforms, too, not just Snapchat, although you do apparently need the Snapchat app to actually control it and get the footage, whether you post to Snapchat or not.