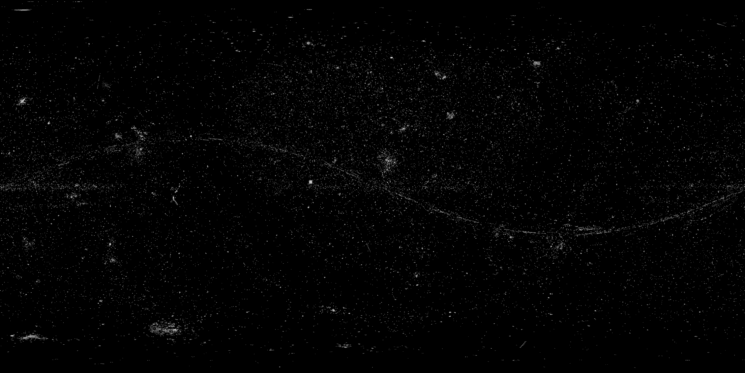 The Hubble telescope has been showing us breathtaking images of space since its launch in 1990. So far it has made 1.4 million observations. Physicist Dr Casey Handmer took 936,000 of these observations and created an insanely detailed composite image of all of them.

After piecing the composite together (using calculations and coding rather than Photoshop!) Dr Handmer realised that around 0.8 per cent of the sky was on show.

The first thing you probably notice is the curved arc across the centre of the image. That’s apparently the ecliptic (plane of orbit) of our solar system.

Handmer goes on to explain “These are planets, asteroids, moons. Their planes vary a little bit so the curved line is actually a family of nearby lines.” If you look closely, you’ll see a  dark U-shaped curve crossing the middle of the frame. This, says Handmer, is the galactic plane.

“Even though our galaxy is full of interesting stuff, it’s also full of dust which probably obscures a lot of more distant sources. Other obvious features include nearby galaxies such as the large and small Magellanic clouds in the lower left and the Andromeda galaxy,” he says.

Handmer says that he was interested to know how many observations would need to be made to cover the whole sky. He worked out the number would need to be about 3.5 million. “Halfway there? Not quite…” he says in his tweet.

And here's one that's a bit easier to see on Twitter. pic.twitter.com/dlNS5jbod3

He then found a database (Astropy API) that contained all the information he needed. After pulling all the data and creating a script to collate it, he decided a visual representation would be interesting. And that is what prompted him to make the image above.

The Hubble telescope never ceases to amaze, and if it’s only halfway done with its observations we can hope to see a lot more interesting things in the future.