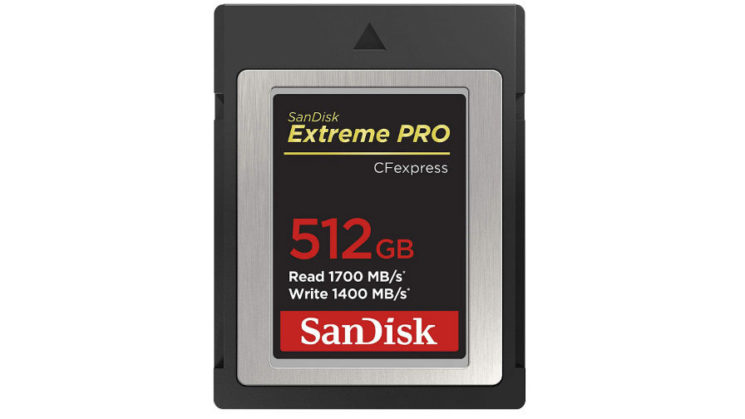 CFexpress is the drop-in next-generation replacement for XQD. It’s also a sort-of replacement for CFast. It doesn’t fit into a CFast slot, but it’s what manufacturers are dumping in favour of CFexpress in their new generations of kit – like Canon’s recently announced EOS C500 Mark II. So far, we’ve seen a few companies throw their names into the hat, but one notable player has remained pretty silent. Until now.

SanDisk has announced their new SanDisk Extreme Pro CFexpress 2.0 Type B card, which is already available for sale in European markets. It’s popped up in 64GB, 128GB, 256GB and 512GB capacities in the UK and other places, and writes up to 1.4GB/sec and reads at up to 1.7GB/sec.

The new cards represent a massive speed increase over their XQD predecessor. The good news is that those using cameras with XQD cards are lucky in that they will be able to use the new CFexpress cards in their devices with a simple firmware update. Right now, that’s mostly Nikon kit, the Phase One IQ4 150MP, and Panasonic’s new full-frame mirrorless cameras. So far, though, Nikon’s still slacking with their firmware update, Panasonic has said a firmware update will come at a future date, and I haven’t heard a peep out of Phase One yet.

CFexpress cards have a theoretical speed limit of 2GB/sec. The first CFexpress cards to be announced were ProGrade Digital, with what now seems like a relatively slow 1.6GB/sec read speed and 1.4GB write speed. And now SanDisk joins a long line of companies who have said they will produce them, including ProGrade, Sony, Lexar, Delkin, Wise, and a number of others.

SanDisk’s new Extreme Pro gets fairly close to that limit with read speeds of up to 1.7GB/sec, matching Sony’s Tough CFexpress cards, although with 1.4GB/sec write speeds, they’re a hair slower than the 1.48GB/sec Sony cards. Of course, you only really need to worry about write speed if it can’t surpass the needs of your camera, and both should suffice for just about any camera out there right now.