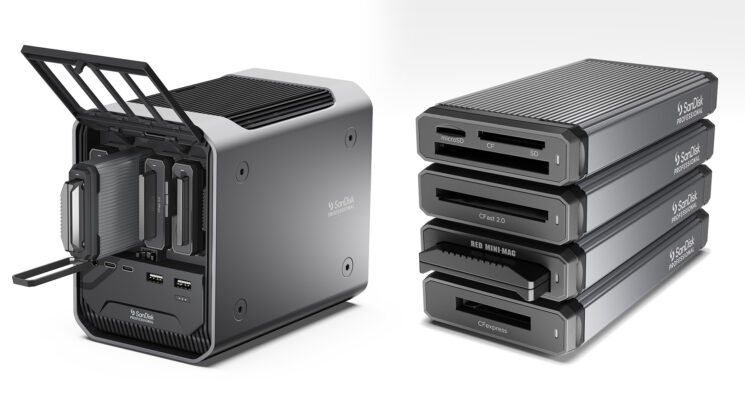 The new SanDisk Professional line also incorporates some of G-Technology’s products (also owned by Western Digital). Along with the announcement of the new SanDisk branded products comes a 4TB version of the G-Drive ArmorLock Encrypted NVMe SSD. The drive brings with it a number of other existing products from G-Technology’s lineup, too.

So, let’s start with that Pro-Dock 4 and the new Pro-Readers. The Pro-Dock 4 is the most overkill memory card reader system you’ve probably ever seen. Designed for maximum speed, efficiency and future-proofing, it connects to your Mac or PC via Thunderbolt 3 for up to 10Gbps transfers and lets you mix and match up to four of the new Pro-Reader modules inside it.

On the front, you get a headphone jack (whether it’s TRS or TRRS for a headphone/microphone combo is unknown) as well as a couple of Type-C and a couple more Type-A USB sockets. Swinging around to the back you get a DisplayPort output for hooking up a monitor, an RJ45 network interface as well as a Thunderbolt 3 output for daisy-chaining other devices. 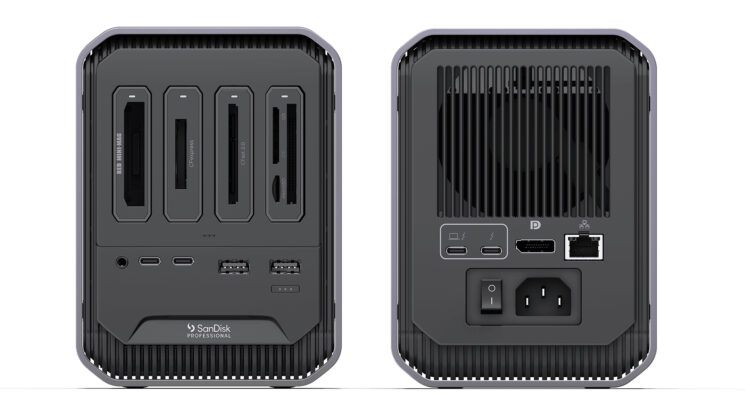 Each of the four Pro-Reader modules available for the Pro-Dock 4 are shown in the image above. One is for CFexpress ($99.99), one is for CFast ($89.99), one is for RED Mini-Mags ($199) and the other is a combination reader supporting microSD, full-sized SD and CompactFlash ($79.99). You don’t have to have the dock to utilise these, as each one has a Type-C USB socket on the back so you can just plug it straight into your computer, too.

The dock itself doesn’t appear to have a price listed on its product page on the SanDisk website yet, although the search results suggest it will start at $499. Exactly what (if any) modules will come with it for that price is currently unknown.

Next, the Pro-Cinema CFexpress VPG400. The listing for this doesn’t appear to have popped up on the SanDisk website yet, but in a press release, they say that it will offer a minimum guaranteed sustained write speed of 400MB/sec. In a world where many of us still aren’t even able to fully take advantage of UHS-II V90 SD cards, this is a card designed for serious shooters with huge data and speed requirements. We’ll keep you updated on this as we find out more.

Finally, G-Technology’s ultra-rugged portable ArmorLock encrypted NVMe SSD is now available in a new 4TB flavour. Previously available in only 2TB capacity, the new device doubles the capacity while offering all of the same 1,000MB/sec speed, ruggedness and security features. Its introduction also sees the 2TB version drop in price from $599 to $399. There’s no word yet on what the 4TB version will cost.

So, there are still a few questions to be answered about these new products when it comes to price and availability. But if you want to find out more about them, when they become available (and for how much) and to see what else has been added to the SanDisk Professional lineup, click here.