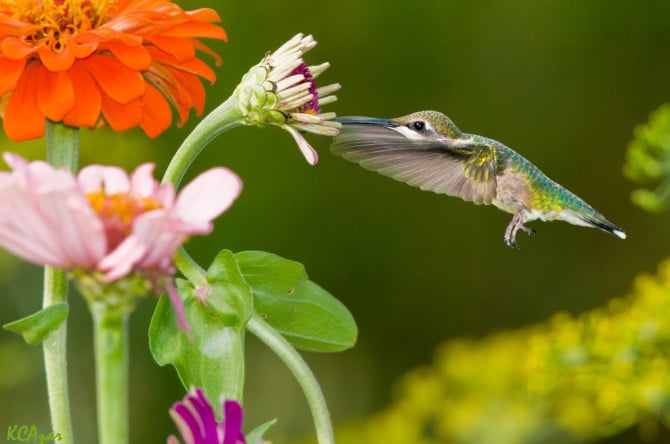 Drones have evolved from hobbyist toys to professional tools as the FAA partnered with CNN to establish a drone usage protocol for journalists and started issuing exemptions allowing commercial use.

In order for these tools to succeed in the fields above, let alone search and rescue missions, commercial delivery and monitor livestock farms, they need to be more reliable and able to operate in less-than-ideal weather.

Australian and American researchers took a high-speed camera and set out to find out how ruby-throated hummingbirds cope in turbulent winds.

The study could lead to drones getting ‘tails’.

According to the scientists, who recorded slow motion footage of hummingbirds in a wind tunnel, hummingbirds are able to hover while keeping their head steady thanks to a combination of wing and tail movements.

“The body is going crazy and the head is just incredibly stable”, said Dr. Sridhar Ravi of RMIT University in Melbourne, Australia, adding that the tail is making “constant corrective maneuvers”.

With each wing changing its position and motion independently, up to 40 times a second, the tiny creatures achieve quite an amazing feat.

Weighing it at just 2 to 6 grams (0.07 to 0.21 oz), the hummingbirds were able to keep their head stable in a steady breeze as well as a breeze varying by as much as 15 percent. While that much not sound like much, small drones are able to manage only a ~7% variation.

The study, published in The Journal of Experimental Biology, could not only improve drones’ wind-handling abilities, but also make it easier for them to hover.

Six months ago Business Insider’s BI Intelligence predicted that almost $12 billion will be spent globally on commercial drones over the next decade. With such a huge market and so many commercial uses, it becomes clear how advantageous it will be to upgrade drones’ ability to handle shifting winds and air currents.

Commercial drone use, even if it is photography related, might not be relevant to most drone users. It is inevitable though that any improvement to commercial drones will eventually trickle down to hobbyist drones as well.

So how long until we see a DJI Phantom or 3d Robotics Iris+ with a tail?