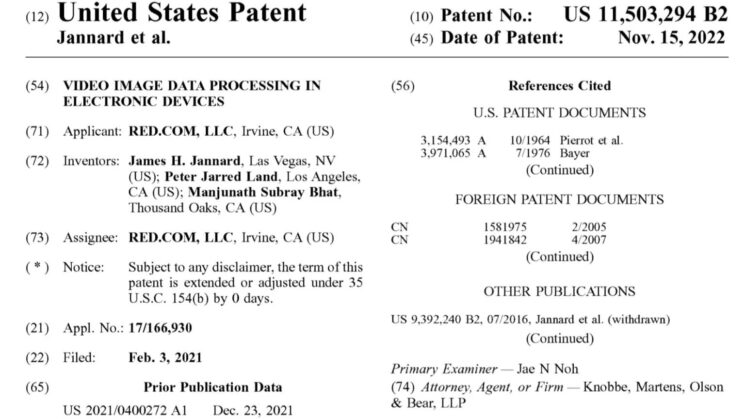 The words “RED” and “patent” are pretty familiar bedfellows. They’ve used their raw video patents to strongarm every other camera manufacturer from being able to implement raw video in their camera without RED’s approval (and a hefty fee), even if those companies have developed their own raw video technologies. Now, they’ve filed – and been granted – a new patent over compressed raw video.

The new US patent number 11,503,294, joints three other RED patents relating to compressed raw video (8,872,933, 9,479,749 and 9,787,878), but this new one seems to encompass devices other than just cinema cameras. In fact, pretty much any device that’s potentially capable of capturing compressed raw video, including smartphones and even sensor technologies they don’t own or use – like Sigma’s Foveon.

YMCinema goes into quite some detail covering the details of the patent, but in essence, RED wants to control everybody and every device capable of shooting raw video, compressed or not. It presents new methods of creating compressed raw video that YMCinema says are “more general and comprehensive” that incorporate a number of technologies that aren’t just mirrorless or cinema cameras.

High-end video capture capability continues to advance. Professional cinematographers as well as increasingly large numbers of consumers are demanding high quality video recording capability, not only in traditional digital video cameras, but also in other video camera-equipped electronic devices including cellphones/smart phones, tablets, and the like.

The new patent shouldn’t affect partially-debayered raw video formats, like Blackmagic RAW – but this is RED we’re talking about, so I’m sure they’ll probably try to find a way to attack them, too, if they feel so inclined. The patent defines and distinguishes the difference between actual raw video data and every other kind of video footage. It defines the raw image data as being not “developed” so that steps can be performed in post, including one or more interpolations (de-bayering/de-mosaicing), colour processing, tonal processing, white balance and gamma correction.

Again, it looks like RED’s just trying to muscle in on everybody else and is trying to completely control the market for profit at the expense of innovation in the industry as a whole. And it appears that it’s no longer just the cinema/mirrorless camera market, either!

It’s interesting that this patent has been granted, though, given that the idea of compressed raw video isn’t exactly a new idea. But then, maybe it’s not surprising. Nikon is currently challenging RED’s original raw video patent in court in response to RED’s accusations that Nikon shouldn’t be offering raw video in the Nikon Z9. Nikon argues that RED should never have been granted in the first place.

It will be interesting to see what the potential legal consequences of this patent might be for RED from other camera manufacturers – and potentially smartphone manufacturers with much deeper pockets and more lawyers than RED. Competitors that have no doubt been working on their own compressed raw video features. Features for which they now might have to pay royalties to RED – or abandon their efforts completely.

You can find a more in-depth summary of the new patent and its potential implications over on YMCinema. It’s well worth a read!

Nikon is trying to invalidate RED’s raw video patent, arguing it shouldn’t have been granted in the first place