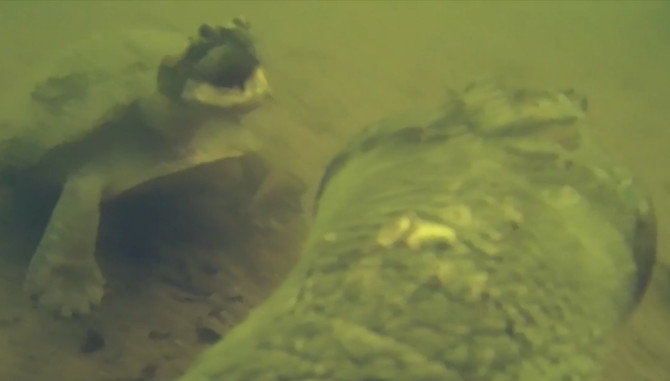 Turtles are fascinating creatures with the earliest one known dating back 220 million years. Despite humans’ interest in these animals for thousands of years, very little is actually known about vast areas of their lives.

Thanks to National Geographic’s Crittercam, researchers have been able to study the giant South American river turtle as never before. The custom made camera provided unprecedented access to the turtles’ uninterrupted underwater behavior and interactions.

These turtles have become so critically endangered that their beaches are protected by armed guards during sensitive months, making this footage all the more valuable.

While found throughout the Amazon basin, hunting, habitat loss and other factors led to a sharp decline in their numbers.

According to Virginia Bernardes of the National Institute of Amazonian Research there used to be 10,000 nesting females in that specific area in Brazil with only 600 remaining today.

Understanding the interaction between the adults and juveniles and hatchlings is one of the institute’s targets, added the doctoral student, and the Crittercam is the perfect tool for the job.

So far the Crittercam has shed light on the females’ behavior and relationships with their young and it is now known that they migrate together. The researchers have also seen instances of interactions between females, including females following other females during the migration, nipping at the back of other turtles’ shells, face-to-face contact and females recognizing other females, says Richard Vogt, the institute’s curator of reptiles and amphibians.

Conservation projects such as this are essential for the survival of many species, and I know from my personal experience in working locally with loggerheads and green sea turtles how important this video can be. Other than its scientific significance, it will no doubt help raise awareness and support these animals so desperately require.