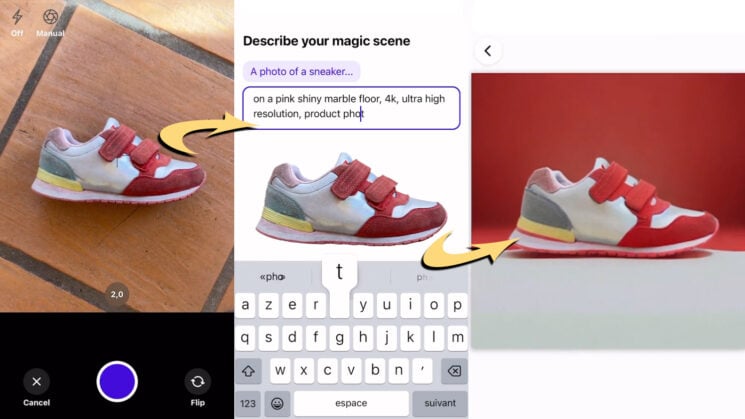 Text-to-image generators like DALL-E have been available to the public for a while now, and so has DALL-E’s API. While it’s amusing to create surreal images with them, these tools come in handy in the real world, and PhotoRoom is one example of this usability.

This photo editing tool now offers an AI-powered feature that turns your crappy phone snapshots into decent, or even great product shots. Just snap your photo, describe the context as you would with DALL-E or Midjourney, and watch the magic happen.

The new feature is called Magic Studio and it’s powered by the open-source text-to-image AI Stable Diffusion. It’s pretty straightforward to use. Open the app and take a photo of the item you want. The app scans the photo, selecting the subject and erasing the background. Then you need to describe, as detailed as you can, the setting you want for the final shot. Abracadabra, hocus-pocus: the app creates a photo that fits your description. PhotoRoom’s co-founder Matthieu Rouif demonstrates the process in a short video so you get a better idea:

PhotoRoom raised $19 million for its AI photo studio, which is already powering millions of resellers and small businesses.

Today, we are launching a new generative AI feature, magic studio, to create stunning marketing images from any product photo

Of course, removing the background isn’t entirely new. You can do it in Photoshop, Luminar NEO, or even Canva and Pixelcut. However, not everyone owns or uses these apps (especially the more complex and paid ones like Photoshop or Luminar Neo). In addition, you get the power of background removal and its text-to-image generation in a single app. Another plus side is that PhotoRoom also offers customizable templates, sized for e-commerce platforms like eBay, Shopify, or Etsy. On the minus side, though, you can’t use Magic Studio on photos of humans or animals – only inanimate objects.

The Magic Studio feature is already available within the PhotoRoom app, but only to Pro subscribers who use the English-language version of the app. If you’re using the free version, you can upgrade to Pro for $9.49/month or $46.99/year.

The end of professional product photography?

I didn’t have a chance to play with Magic Studio, but The Verge’s Jess Weatherbed did. And the results are, well… Improvable. Jess notes that uploaded objects “sometimes appear distorted or replaced entirely.” In other words, not all resulting product shots are believable, although some of them are pretty good.

Since I didn’t use PhotoRoom’s Magic Studio, I tried DALL-E for some product “photos.” I used some of my free credits to play with it and make some variations. I used the prompt “product photo of Converse All Stars sneakers in studio” and here’s what I got:

For now, I think it’s safe to assume that there’s still a long way to go before AI-generated photos replace human photographers. Who knows what the future holds though, but let’s cross that bridge when we get to it.