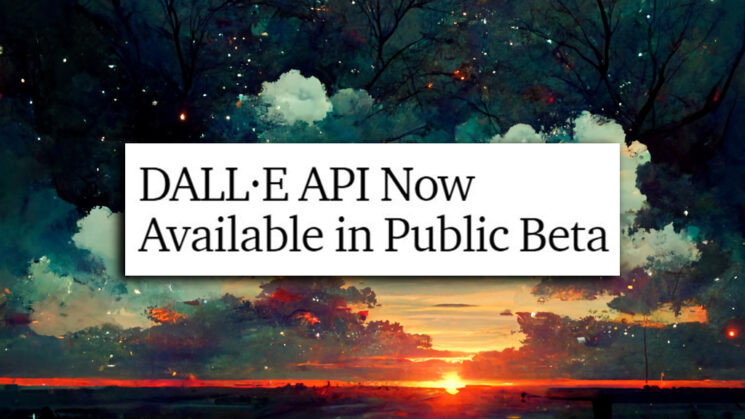 AI-powered text-to-image generator, DALL-E, has been available to everyone for a while now. It’s absolutely amazing to play with, but from now on, it could become a part of other apps and find so many applications.

OpenAI has now opened DALL-E’s API to everyone, meaning that developers can integrate the generator straight into their apps and products. So if you’re an app creator, you can now start building with this same technology in a matter of minutes. How exciting!

As OpenAI wrote in the announcement, DALL·E joins GPT-3, Embeddings, and Codex in its API platform. The company has added a new building block that developers can use to create new experiences and applications. If you’ve played with the generator, you’ve seen that it can go from surrealistic or videogame-like to photorealistic creations. “As our research evolves, we will continue to bring the state of the art into the API, including advances in image quality, latency, scalability, and usability,” OpenAI writes.

The company notes that it will keep the filters for hate symbols and gore and all developers will have them included if they rely on DALEE-S API. “As a part of OpenAI’s commitment to responsible deployment, we will continue to make trust & safety a top priority so that developers can focus on building,” the company writes.

Other than creating art from song lyrics (which has become my favorite thing to do with these text-to-image generators), they can have other applications. OpenAI gives a few examples, such as Microsoft’s app Designer and Image Creator. Then there’s the fashion and lifestyle operating system CALA. Finally, something photographers would be interested in: Mixtiles. This startup uses software and an easy-hanging experience to help millions of people create beautiful photo walls.

Even though there are concerns that text-to-image generators will kill creative businesses, I am not that pessimistic. Instead, I’m excited to see where this technology could take us and what applications it will have. And of course, I’m curious to see how it will shape and change the artistic world – because it inevitably will.

AI image creator DALL-E is now open for everyone

« A close up of a curious croc wins this year’s Mangrove Photographer of the Year Award
I am shooting over 100 weddings in 2022, and I just moved from Strobes to LEDs »