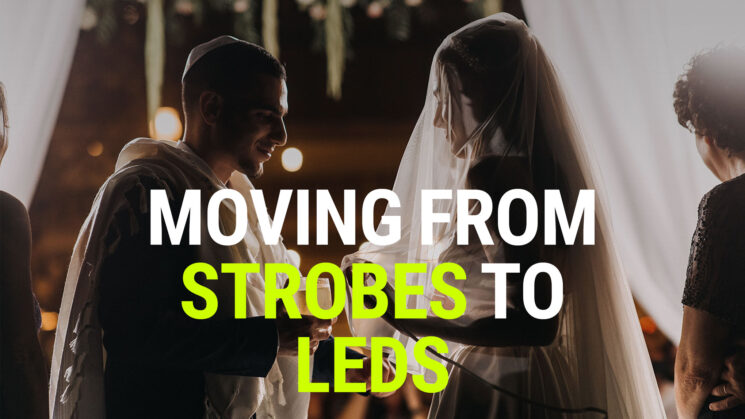 It may sound crazy, but by the end of 2022, I will have shot over 100 weddings. It was quite a tolling year, but I did not want to leave anyone who got their wedding delayed due to COVID without a photographer and… The floodgates opened.

As a photographer who shoots so many weddings, I am very picky about my gear. I care about a lot, but pushed to the wall, I would say that durability and size/weight are the two most important factors when it comes to choosing gear. There is more to come, but the TL;DR is I’m in love with the Godox ML60Bi LED light.

Moving from strobes to LEDs

As I mentioned, I care a lot about size, but that is not the only factor when I choose my wedding lights. As a matter of effect, until quite recently, I was putting up strobes for some of the wedding shots, which are now being replaced with LEDs.

It’s not just because LEDs are getting brighter. It’s also because cameras are getting better at picking up light at low ISO. The Canon R5 – my go-to camera – I can easily push ISO to 800, or even 4,000, and get satisfying results, so LEDs are becoming a viable option. 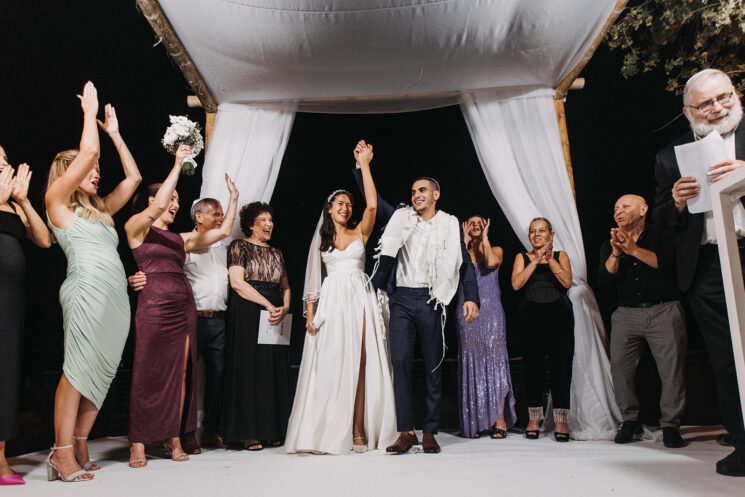 This is how good the R5 is at picking up light

Sadly, most COB LEDs are even bigger than strobes, and for batteries, they typically need an expensive and cumbersome V-Lock. Not so with the ML60Bi. They are small and operate on cheaper Sony NPF batteries. This not only makes them more affordable but also makes a more manageable setup.

It took me a while to move from Strobes to LEDs, but I could not be happier. For one, I can match the color of the light to the ambient light in the ceremony without using gels. But even more important, there are no misfires. LEDs just don’t fire or misfire, they are simply… “on”. Not to mention the other benefits you get when moving from strobes to LEDs: no more fragile tubes, you see what you shoot, and they can serve a second shooter without competing for triggering. 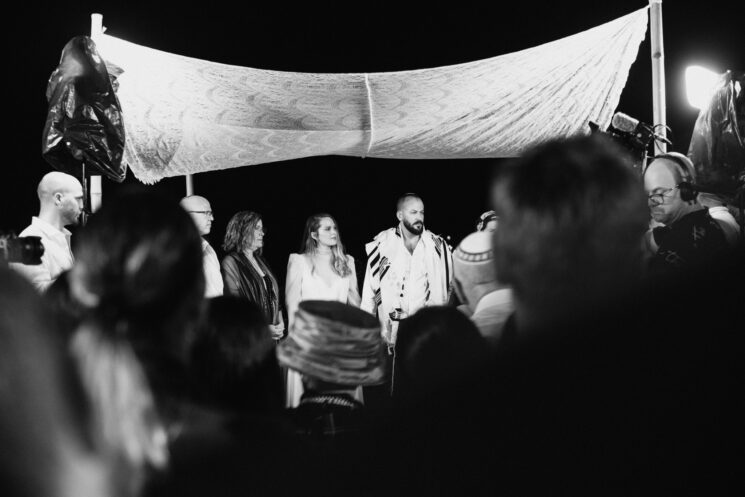 Out of all the features of this light, there are four that are critical to me:

Being able to control the color of the light “in camera” vs. using strobes and gels gives me significantly more control over the scene. It saves both the gel matching phase, which can be tedious with strobes and the post-work needed in case the match is not 100%. Sadly, that happens more than I’d want. 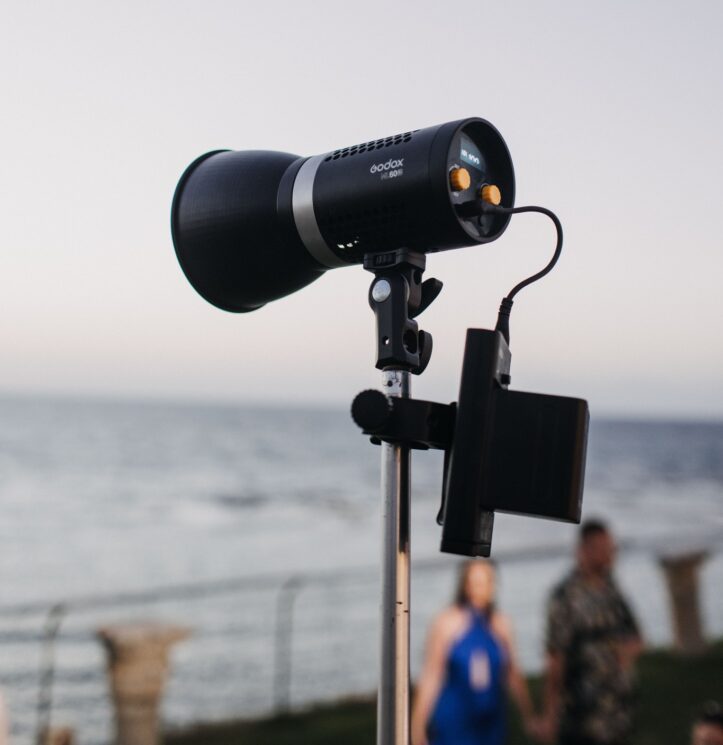 With the Godox Q clip

The other aspect that I like about this setup is the small battery footprint. To be honest, strobes also have a small footprint, but one thing that deterred me from LEDs was the need for V Mount batteries, which are both expensive and cumbersome to handle. NPFs, on the other hand, are readily available, faster to charge, fit better in my case, and are definitely more budget-friendly for the capacity. Specifically for the ML60Bi, the tiny battery plate fits well on a light stand. I did swap the default battery mount from the plasticky strap thingy that comes with the ML60Bi to a Godox Q Clip. I did this for both lights, so it’s $25.00 well spent.

Other than that, the ML60Bi comes with a great set of accessories: 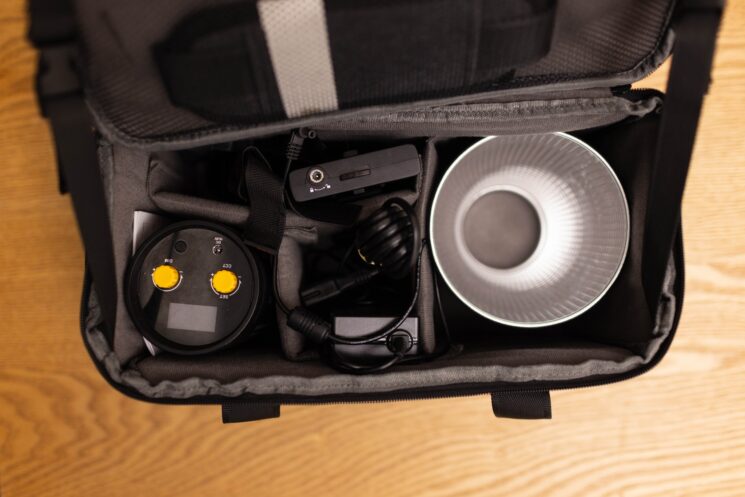 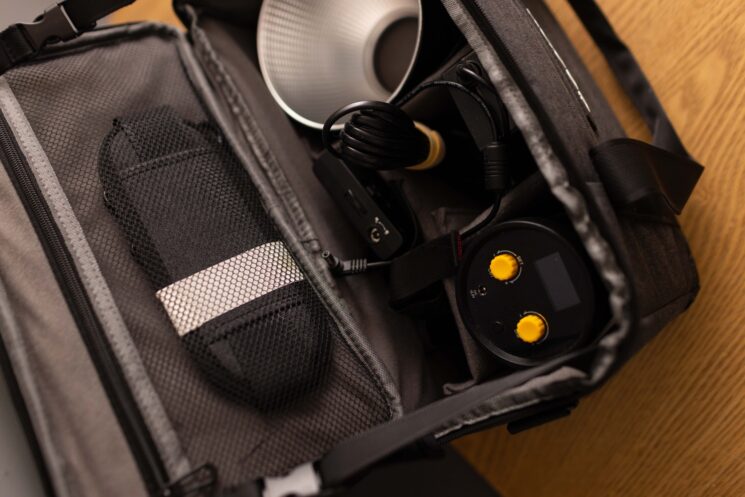 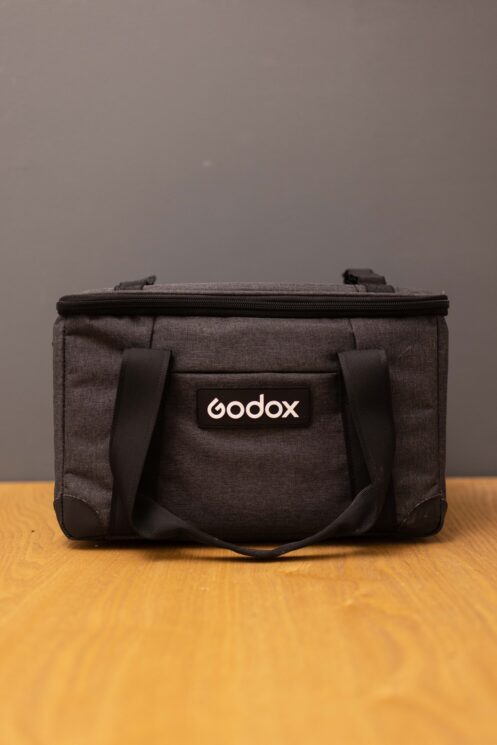 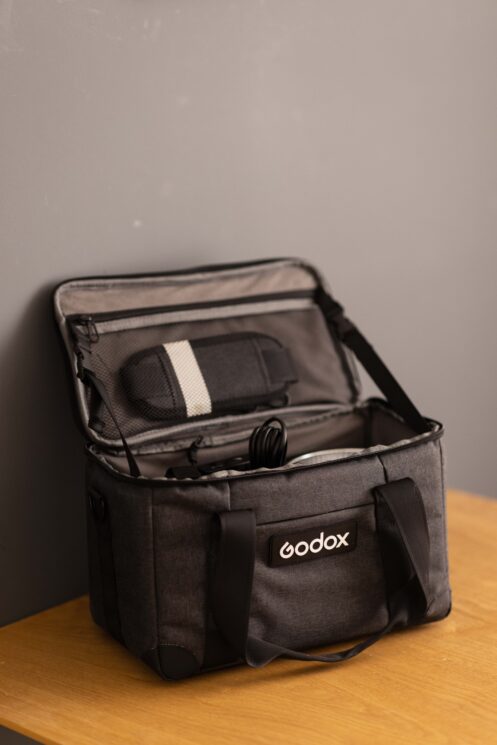 The Godox ML60Bi and wedding photography

I mostly shoot Jewish weddings; part of the ritual is standing under a piece of fabric called Huppa. Most Huppas are white; I guess this is how tradition goes. But where religion sees a ceremonial prop, I see a huge reflector. 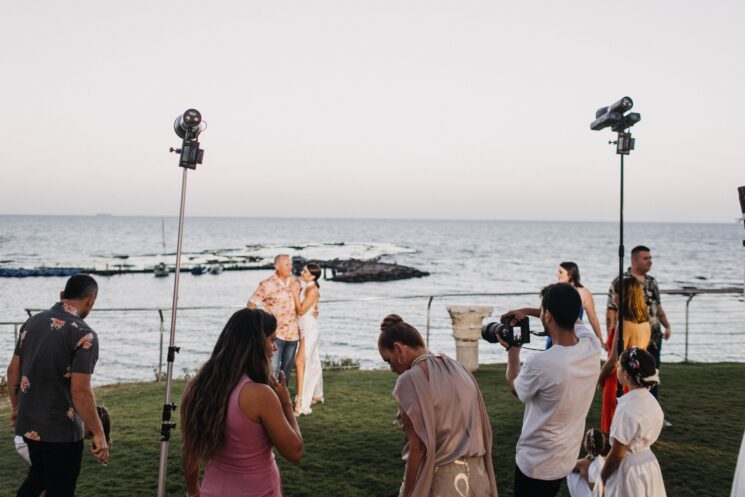 Set up for low Huppa 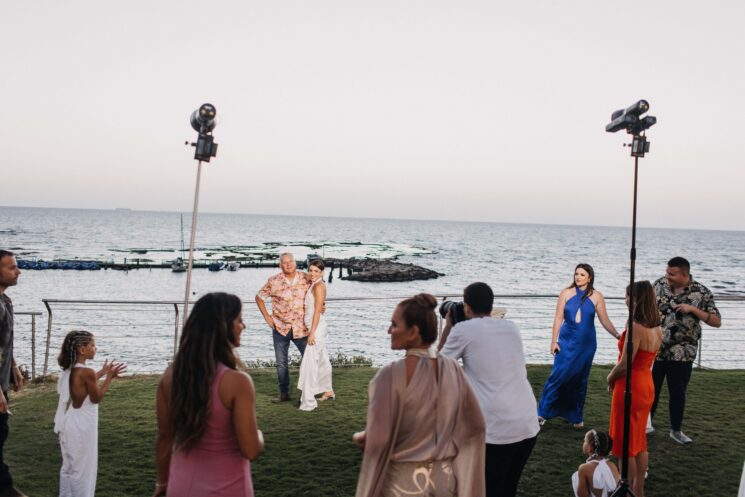 Set up for low Huppa

If the Huppa is low enough and close to the bride and broom, I will use it to bounce a couple of Godox ML-60s. The huge white surface gives an incredibly soft light. Interestingly, sometimes the Huppa is held by four attendees, so if the mood is right, I can even ask them for small adjustments.

I will use a different tactic if the Huppa is high, as some venues have it. When Godox introduced the ML line with the ML-30, they introduced a weird silicon-based softbox. (If you remember the domes from Garry Fong, then this is a similar concept but bigger. Magmod makes a similar yet smaller design for strobes.) To make a long story short, I will mount the softboxes on the ML-60Bi and light the Huppa from the sides. The softboxes give just the right amount of diffusion to make the bride and groom appear their best. As a bonus, if a light-softbox combo falls (and they do fall), nothing will happen to the softbox or the light. 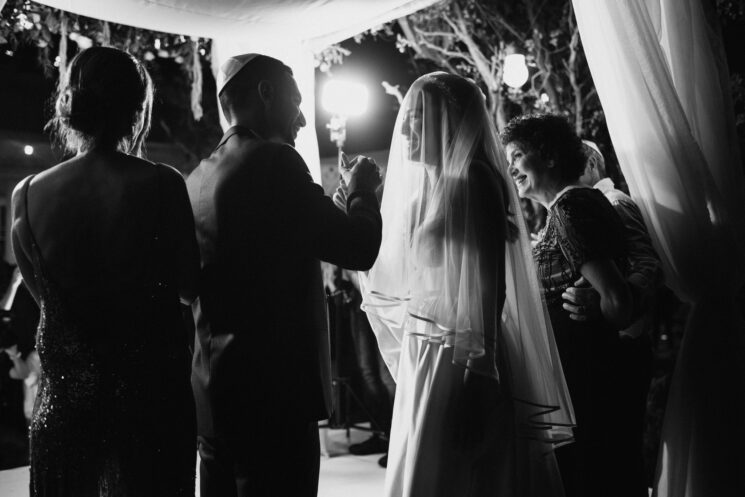 The sofboxes are a great addition 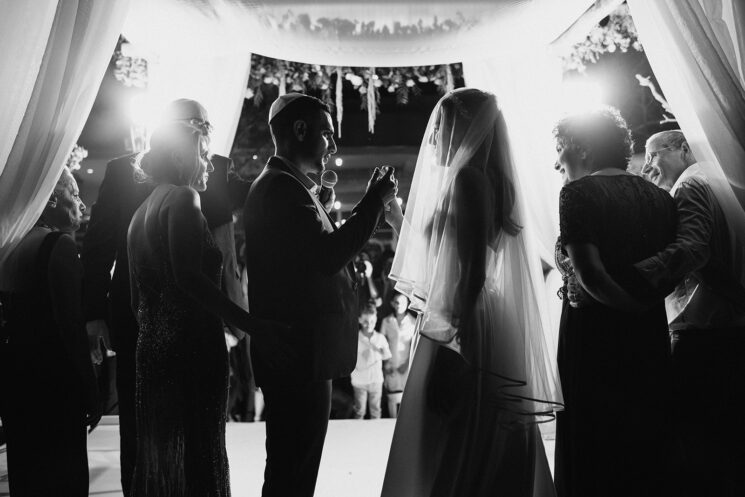 Using the sofboxes for back light

Using the Huppa as a diffuser + softbox

There is one caveat, though. You have to shoot at high ISO and a relatively open aperture for this setup. With the R5 I find this a no-brainer. The camera handles high ISO with very little noise, and nails focus every single time. Friends with recent sony cameras tell me they share similar experiences and that the setup works for them.

Can I always use this setup? Almost, but not always. LED light is still not there if you compare it to strobes. I’ll still crank the strobes out if the ceremony is shot against the sunset or the venue uses strong weird lights. (yes, I carry both setups in my bag).

Being able to better diffuse the light with the silicon softbox makes a huge impact on image quality. Here are some tests to see the light spread with and without the softbox. Swipe from left to right to see the difference 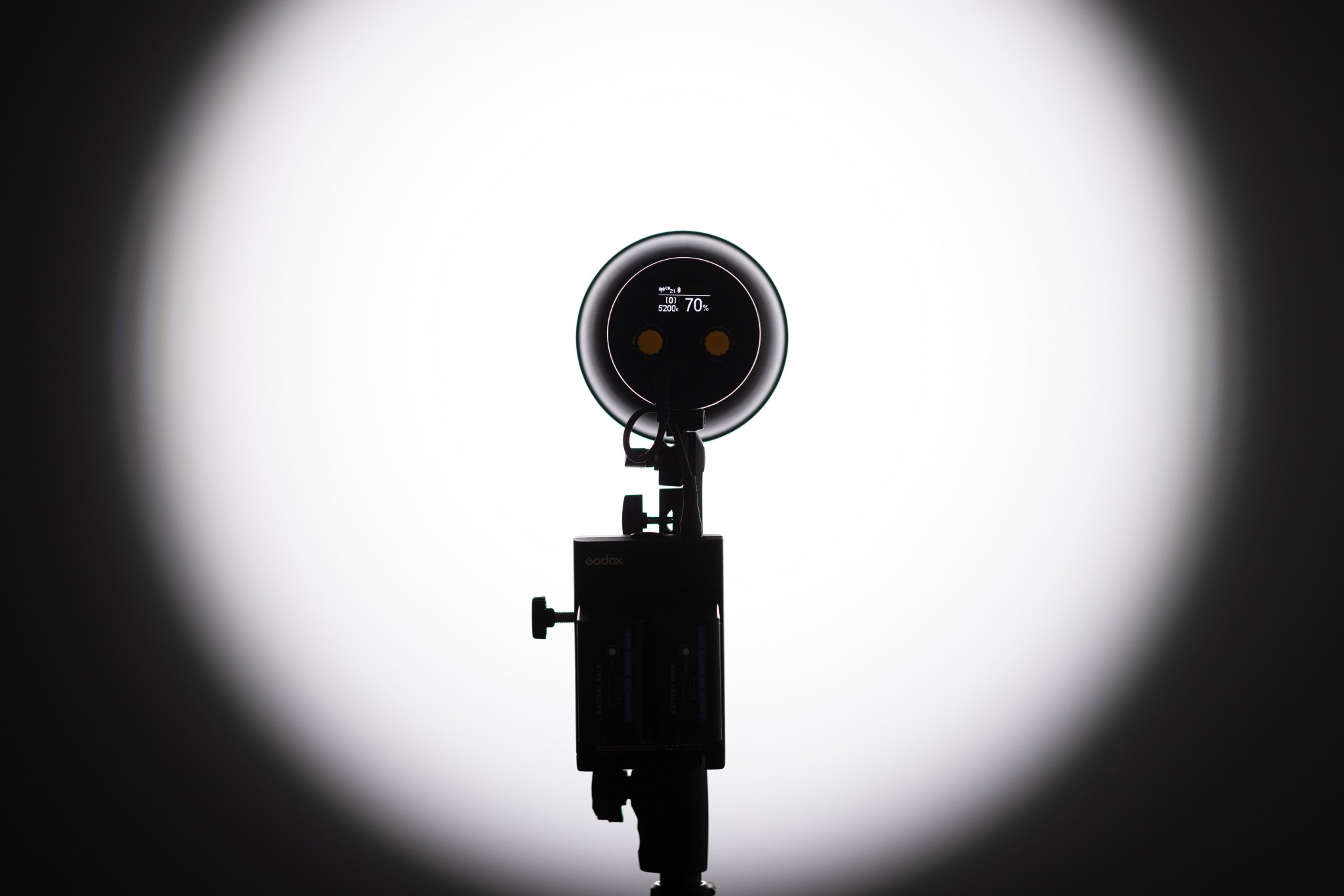 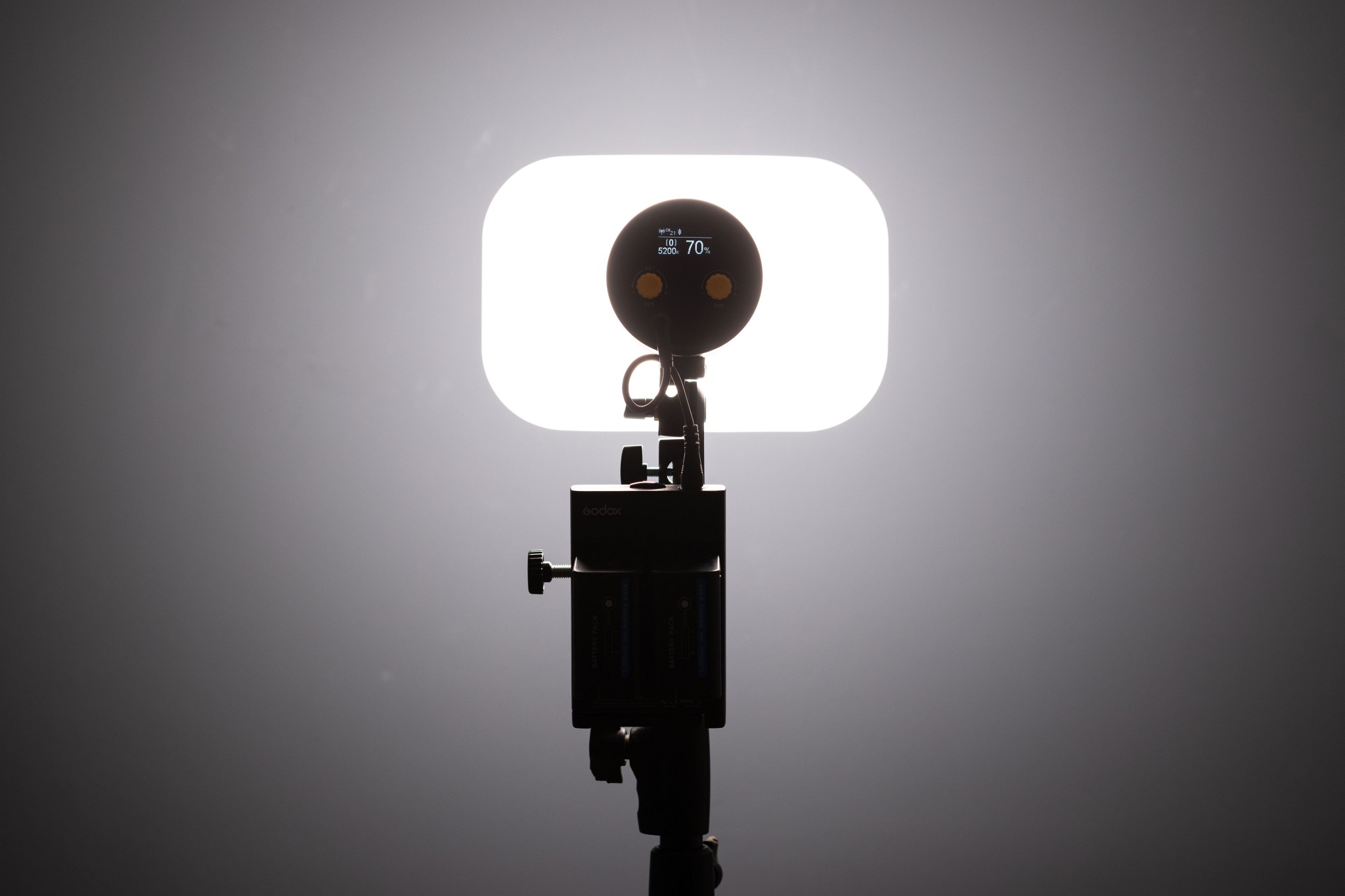 Are we at a place where LEDs can replace strobes completely? I don’t think so. LEDs will never completely replace strobes in some situations. Even if the LEDs can match the power of strobes, the light will be so blinding that it would not be a pleasant experience.

That said, My go-to setup today is a set of two GODOX ML60Bi, two silicon softboxes, and a Canon R5. 90% of the time, this kit does the trick. For those times when it doesn’t, I still carry my trusty AD200s.