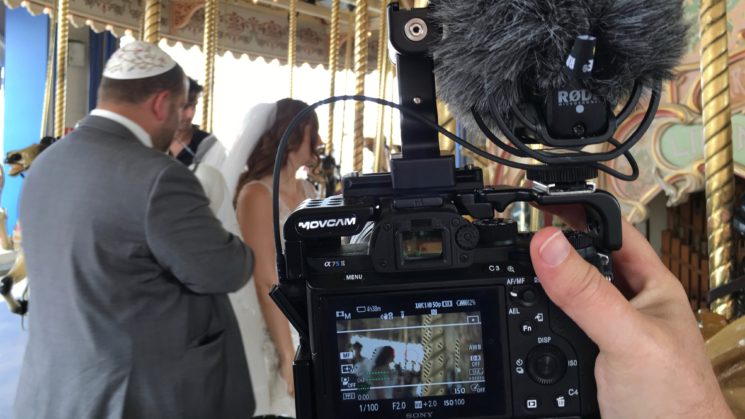 I had always said that I never wanted to shoot weddings as there was just too much pressure to not mess up. Imagine missing the shot of the first kiss, or having a card fail and losing all your footage? Or having to deal with a bridezilla. It all seemed just like way too much stress that I never wanted to put myself through. But I saw a job opening for a company I really admired and figured, since the idea scared me so much, I should probably try it! I got the job and stayed there for two years and boy, did I learn a lot!

1. It’s not about the gear or the team. It’s you and your camera.

When I started shooting for this company, they had been using Canon 5Ds but were moving to the then-new Sony A7s for the low light features. And that was it. No rigs, no lens selection, no lights. Just you, a couple of lav mics and the camera. And literally just you – most shoots were single shooter. For a wedding! It’s a lot of pressure (Of course, most people who get better with time and experience and knowing what is going to happen when during the day of the wedding. This is why the training period was about three months and I assisted the main shooter on at least 10 weddings before they sent me out on my own.).

Besides being someone who likes working in teams, this also scared me even more as the pressure was really on. Imagine if you’re looking one way and something really important was going on in the other direction and you don’t get it on camera? On the flipside, knowing that I was the only one there to capture those moments made me really think about everything. I learnt to anticipate those really important moments and be there either before they happened (spooky) or just as they were happening. Either way, win for me!

There were times I’d turn up and met the photographer who had bags and bags of gear and I’d feel a bit like the odd one out but I learnt that the camera was all I needed. Without all the extras, I could focus (pun intended) on the couple and the wedding itself.

The one bit of gear advice I will give is that you should use lots of cards and change them about every hour if you can. Early on I had the nightmare of getting about 8 hours into a wedding and thinking that one of cards had failed, which meant I’d lost the ceremony and all the beauty shots. Thankfully I managed to rescue the card, because that was a conversation I was not looking forward to with the couple.

Because the gear was so minimal, it was easy to move among the wedding guests and the bridal party without people feeling overwhelmed. There were many times people didn’t realise I was filming – they assumed I was the photographer and would pose awkwardly – but most of the time, I managed to capture some beautiful moments that a lot of gear may not have allowed. I often had to tell people to stop standing still for the “photo” and move cause I was video.

The day is not about the wedding video – it’s about the couple and they need to have the best day ever. Getting great shots was actually a secondary concern but almost because of that, I ended up getting them anyway. If the couple are relaxing and having a great time, don’t worry, those beautiful shots are going to happen.

I’ve never shot a wedding where everything went completely to plan. Something may go wrong with the venue, or the catering, or the ceremony. Even heaven forbid something may go wrong with you or your gear. My “boss” at the production company used to split his pants (they may have been too tight) about once every 5-10 weddings and it was always at the start of the day.

The key is to just be a leaf on the wave of the day and go with the flow. Fix what you can and don’t stress about what you can’t. Hopefully your calmness will rub off of other people and everyone can make the most of the day.

4. Think about your shots carefully.

So if being the sole shooter and shooting with minimal gear wasn’t enough of a challenge, the company I shot for gave the couple ALL the footage from the day. Not just an edited version; ALL OF THE RAW FOOTAGE. So you can’t just push “record” walk around and then pull out whatever you need when it comes to the edit. You have to take the time to setup every shoot, push record and stop recording when you’re done.

This may seem like a really silly and unnecessary thing to do, but it was actually a really great thing for the couples. Of course, they want to watch the beautiful highlights video of their wedding soon after the event, but in 10-20 years time, it’s those little moments of “Uncle Dave” who is no longer with them, that they will really appreciate. So great for them, a potential nightmare for the shooter. Though it was an invaluable lesson to me in terms of being a lot more deliberate with my composition and learning to “see the shot” before I even raised the camera to my eyes.

But after all the technical stuff that I learnt, the most important lesson that I learnt was that if you just focus on making it the best day ever for the couple, their friends and family. The beautiful shots will come. This may seem obvious, but I could tell you some stories about some people who could have done with a refresher on that particular lesson. It can be really easy to get caught up in the plan and the gear and the shot – both for stills AND video shooters – but when you focus on the couple, it all works out. Beautifully.

How to shoot awesome dance floor photos at weddings

I Shoot Weddings Too – Don’t Tell Anybody!