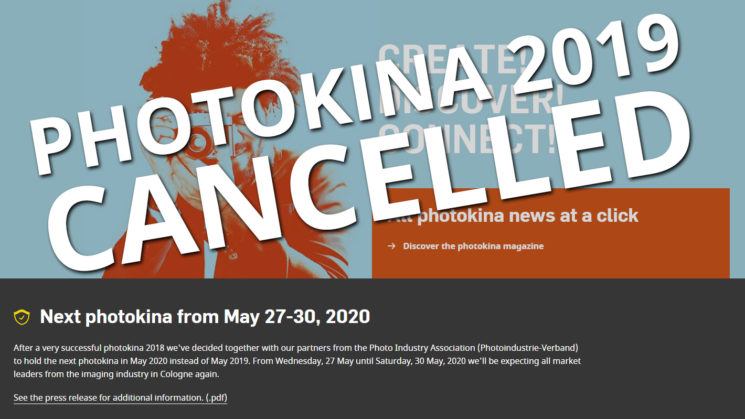 Well, this will come as a bit of a shock, especially to all of those people who decided to skip Photokina this year in order to attend the next scheduled Photokina in May 2019. The German Photo Industry Association (PIV) has now decided that there will be no Photokina 2019. Instead, the new annual show cycle will begin in 2020 – just like many of us suggested they should’ve done from the beginning.

The next Photokina was originally scheduled for Wednesday 8-11th May 2019, but now the new Photokina the press release reads…

“photokina 2018 clearly exceeded our already optimistic expectations with groundbreaking innovations and 180,000 visitors from 127 countries,” explained PIV’s CEO Rainer Führes. “As a result, we set the bar very high for the next event. It is therefore unlikely that, in May 2019 after just over seven months, we will once again be able to create the same enthusiastic atmosphere that characterised photokina 2018. This is why we have decided to start the planned annual cycle in 2020.

Photokina originally announced their intention to go annual in May 2017. The plan was to do Photokina 2018 in September as usual, but with the number of days dropping from 6 to 4 and the show size being quite drastically cut down. Then from 2019, the show would move to May on a new annual cycle.

Many of us thought it was a bit odd to hold Photokina 2019 only 8 months after Photokina 2018. It wouldn’t give people a lot of time to recover and prepare. And, finally, those in charge of Photokina seem to agree. Although, not until after having already held Photokina 2018.

Photokina 2018 would probably have been even bigger had they not announced a 2019 date, causing quite a few people to hold off attending because they didn’t want to do it all over again just seven months later. While Photokina 2018’s attendance does sound impressive, that number is down from a reported 191,000 at Photokina 2016.

Hopefully, not too many people have booked non-refundable flights or accommodation yet for next year’s non-show. The next Photokina will now be May 27-30th, 2020.

You can see the full press release and find out more on the Photokina website.