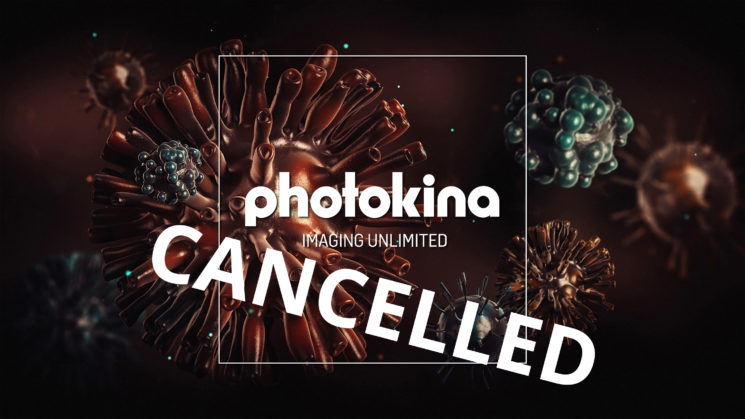 Well, after The Photography Show and NAB, it was pretty obvious that Photokina was going to meet the same fate soon enough. Despite all three initially saying that they were going ahead one day shy of a month ago, and Photokina just a couple of weeks ago saying they see no reason to shut down, all three are now cancelled. Ok, technically TPS is postponed, but we’ll see.

Photokina organisers, Koelnmesse, issued a statement announcing the cancellation of the show, with the next event to be held in 2022 (not 2021). So, it seems like their new annual schedule (first announced in 2017) is being delayed yet again.

The statement from Koelnmesse reads as follows…

After intensive consultation, Koelnmesse GmbH has decided to cancel photokina 2020, originally planned to be held 27 to 30 May 2020. The next instalment of the leading international trade fair for photography, video and imaging will be presented from 18 to 21 May 2022. The Imaging Innovation Conference will not be celebrating its première in 2020 as originally planned; a new date will be coordinated.

This also happens against the background of the agreement reached on 16.03.2020 between the German federal government and the governments of the German states – laying down common guidelines for dealing with the coronavirus epidemic and explicitly including the general closure of trade fairs and exhibitions. This impairs the planning security for Koelnmesse and the participants of the trade fairs in Cologne far beyond the scope of the current scenarios. With this early announcement, Koelnmesse wants to give its exhibitors and visitors planning security.

The decision not to host the next edition of photokina until May 2022 was made with in view of several factors: Even before the appearance of the coronavirus, the imaging market was already subject to strongly dynamic movements. This trend will now gain momentum and must be factored into plans for the upcoming photokina. Added to this is the fact that our customers’ resources are already under heavy strain in 2021 – as a result of general economic trends as well as rescheduled events on the global trade fair calendar. The orientation towards 2022 gives everyone involved time enough to design the next photokina with an eye to the needs of the market, and of our exhibitors and visitors.

Kai Hillebrandt, Chairman of the Photo Industry Association [Photoindustrie-Verband e.V. (PIV)]: “It goes without saying that PIV completely stands behind the decision taken by Koelnmesse to cancel photokina 2020. The health of exhibitors and visitors is top priority at the moment. As the conceptual sponsor of photokina, we will do our utmost to assist the Koelnmesse with the planning of the next edition of photokina.”

It was pretty much a certainty that this was going to happen, with its fate sealed more each passing day over the last couple of weeks. It’s a shame, particularly for Photokina, as they’ve struggled to reorganise into their new annual format for the last three years, and now won’t begin until at least 2022.

Photokina 2020 originally scheduled to take place at the Koelnmesse in Cologne Germany between 27-30th May. The website still lists the previously scheduled dates and does not yet appear to have been updated to note the cancellation.

The Photokina website has not yet been updated to reflect the cancellation as of initially writing this post.

The website also shows the most recent update on the show’s response to the coronavirus pandemic as being from yesterday, stating that everything is continuing as planned. Hopefully, they’ll update the website soon so as to inform more potential visitors to the show as early as possible. 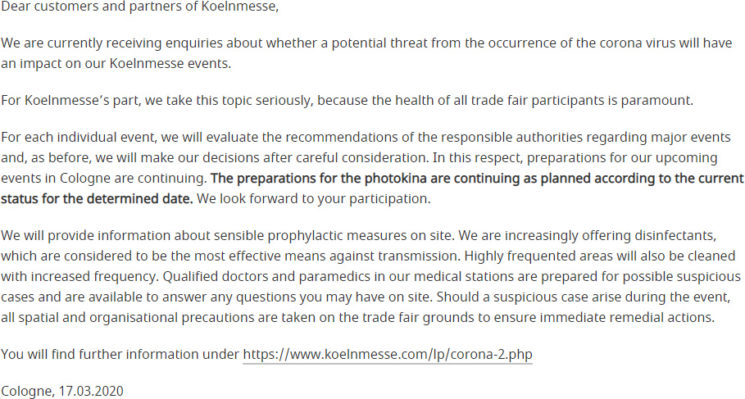