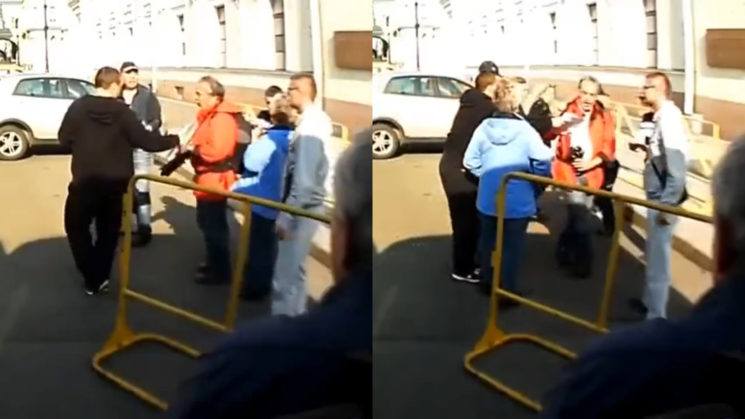 There’s an interesting discussion that’s popped up on Facebook recently, started by award winning photographer Rutger Geerling, over what we may be able to do to help better protect our equipment out in the wild. We’re not talking about the bags we leave laying around filled with gear we’re not currently using, but items actually on our person that are all too easy to steal.

Without intervention and design alterations from the manufacturers themselves, it seems there’s very little we can do, but there are some great suggestions offered in the comments on the Facebook post, though.

In the image above, there’s only 7 seconds between the frames where the chap with the camera has his lens and then walking off without realising it’s missing. Here you can watch the full video. Notice how there’s at least two people working together. One to distract, the other to grab. Even though he notices quite quickly, the lens has already been passed off to somebody else.

While digital photography has been a huge boost for those who enjoy photographer as either a hobby or a profession, it hasn’t escape the notice of thieves. You can see in the video above, that removing a lens from a camera is something they can now do easily without even looking.

It’s also become such a common problem, that it’s even being depicted in movies. Such as Focus, starring Will Smith and Margot Robbie.

But what can we actually do about it? At the moment, it seems not a lot. Or at least, there’s no one-size-fits all solution, but a few different suggestions have been made.

D-Rings and a tethering cable

The first is for using long lenses with built in tripod collars. Placing something like tripod screw D-rings or Black Rapid’s FastenR into the sockets on both the tripod collar and the camera itself, then attaching the two via some form of wire. Then, if they attached the lens, they wouldn’t get very far without you being able to notice.

While this may not be completely foolproof, it would make the job of stealing a lens that much more difficult. Assuming they even saw that the lens was physically connected to the camera body, it’s not going to be a quick push of a button and a twist of a lens. They’d need to either unclip or cut the cable or remove whatever you’d screwed into the tripod socket, too.

This does, however, make it a little more difficult to operate with a tripod or monopod easily.

Another suggestion in the post was a 3D printed mask, which sits over the front of your camera around the lens mount. A more refined, slimmed down version was later posted. This is a pretty cool idea, and I think it would definitely fend off a few opportunists, but I do wonder how durable it would be, and also how quickly thieves would learn to adapt.

I do think a custom 3D printed solution may probably hold the best answer overall, at least for now. If somebody manages to release something as a solid concept, hopefully there’ll be a manufacturer out there willing to run with the idea.

A hacked up Nikon trigger cable

Sorry everybody else, this one’s only for the Nikon shooters. And, well, it’s not even for all Nikon shooters, just those who have a 10 pin port on the body. This is something I noticed myself, actually, while out one day, but found it more of an annoyance than anything else. Now, having seen this suggestion, it’s a fantastic idea.

Basically the 10 pin port on Nikon bodies that possess one is where you plug in devices such as remote triggers and intervalometers. The official Nikon cables helpfully go off to the side, in order to not get in the way. The cheap Chinese cables, however, often love getting in the way. The 10 pin port is also a screw-lock connector. Meaning that once it’s screwed down, it’s impossible to just pull straight out.

For this method, the solution is simple. Buy the cheapest device you can with a Nikon 10 pin plug on it, cut the cable, heat shrink the end to make it pretty, then screw it into your 10 pin socket. With the lens release button covered, nothing’s going to be coming off until you want it to. As tight and awkward as the 10 pin plugs can be to screw in and out for the photographer, they’re not quickly or easily going to be removable by thieves, either.

There’s one fundamental problem with all of the options offered, though. It’s not a problem for me, but it seems to be a problem for a lot of people. I think it’s an issue that will be around regardless of what we or manufacturers attempt to do to prevent our lenses from easily slipping off at the hands of thieves, though..

Many of the suggestions on the thread were being shot down simply because it would make changing lenses more difficult for the photographer.

Well, what? Hello? Isn’t that the whole point? To make it difficult for people to take the lenses off?

No matter how much photographers DON’T want their lenses stolen, many don’t want to take 10 seconds to switch out their lens instead of 2 seconds. But this probably explains why no DSLR or mirrorless manufacturers have any kind of security locking mechanism built in.

There’s a few other suggestions on the Facebook post, so and it’s got some good discussion going on. So, it’s worth checking out if you’re worried about gear security while out and about. It’s probably also worth looking into systems like GearEye.

I don’t know what the solution is for everybody, but I do think it’s something that manufacturers will ultimately have to incorporate into the systems themselves. I definitely know I’ll be picking up a few of those cheap 10 pin Nikon cables, though.

Is lens theft a big problem where you are? Has it happened to you? What other ways can you come up with to combat this problem? Let us know, and share your ideas in the comments. And be sure to swing by the post on Facebook, too.

The emotional moment a photographer gets her stolen camera equipment back

Is There A Light Leak Epidemic With Today’s Mirrorless Cameras?