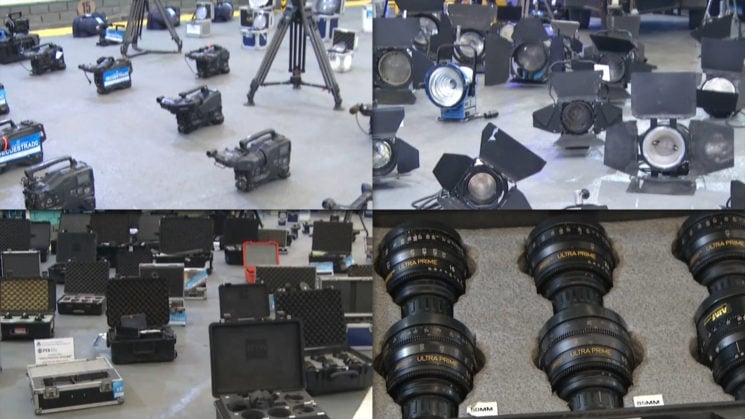 If you’ve been working in Hollywood lately and noticed a piece of equipment disappearing here and there, it might currently be in Argentina. Sky News reports that a huge haul estimated to be worth around $3 million has been discovered in Argentine as part of a cooperative investigation by the FBI, US Police, US Embassy and Argentinian Federal Police.

The haul seems to be primarily Arri equipment, although there seems to be a fair bit of Canon & Sony kit, too, judging from the video posted by Sky News. Argentinian police say that the equipment was being targeted in Hollywood and other US cities before being smuggled into the country. It was then being sold to local gear rental companies.

And if you want to know what makes up $3 million worth of filming equipment, there is a list…

Oh yeah, that’s a whole lot of kit. Sky News doesn’t want to let me embed the video, so head on over to their site to see the full scale of just how much gear there is. They also report that four people in the USA have been arrested, with 17 suspects identified in Argentina. They say that some of the items have also come from locations in New York and other parts of California.

This must have been going on for quite a while for so much kit to have disappeared. Even if it was only one or two items each from a bunch of different companies, it’s amazing that they managed to sneak it all out of the USA and into other another country. And it likely was kit from many different companies. Because when there’s a break in and a huge amount of kit is stolen, we typically hear about it. The photo & video world is still relatively small.

Way back in 2014, California retailers saw over $1 million worth of Blackmagic cameras stolen. In 2015, LenProToGo was broken into and $600K worth of gear was taken. In March last year, Midwest Photo Exchange was burgled with hundreds of cameras and lenses stolen. Lens manufacturer Veydra was also broken into during the same month, with over 200 lenses taken. Then there was the Sony truck stolen last April while on its way to NAB in Las Vegas. Even relatively small break-ins make the photo news. Like last December when thieves broke into The Camera Store and stole $35K’s worth of Leica & Hasselblad gear (they got it back).

No word on what’s going to happen to all the gear recovered. Presumably, insurance companies will have already paid out for many of the items as they’ve been reported missing.

« A Love Affair With Water: Photographer Spotlight Q&A With Sarah Lee
This in-depth beginners guide shows everything you need to know about manual exposure »