Update: right on, this project is now on kickstater, get your wallets ready!

Losing equipment is one of a photographer’s biggest fears. But, it happens. You’re out on location, having a good time, you pack away your stuff and think you’ve got everything. Then you get home and realise you have to walk 90 minutes in the pitch black to go back to the location you just left to go and find a microphone (yup, happened to me last week).

GearEye aims to solve this problem by tagging and cataloguing all your equipment. It keeps track of it all, so that you don’t have to. We’ve heard promises like these before, though. The failed KitSentry project from F-Stop Gear left a sour taste. That GearEye is also being hosted on Kickstarter will make a few feel hesitant. F-Stop cited part of the problem being down to patent issues. Will GearEye face the same issue? Let’s hope not. 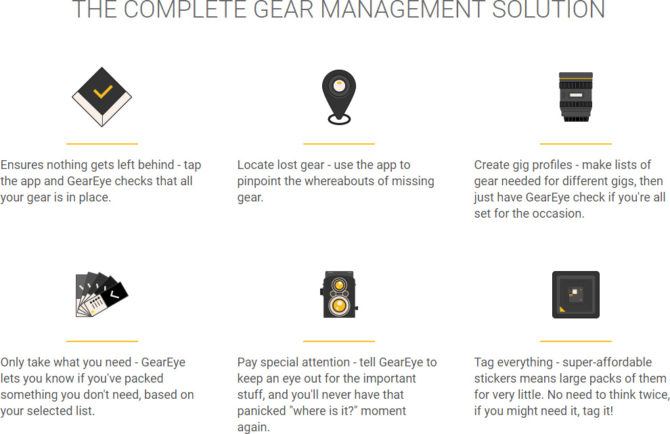 I don’t know about you, but a tracking system like this is something that would be absolutely invaluable to me. I regularly shoot on location, the gear I take varies from shoot to shoot depending on the needs of the session, and it’s easy to forget items. Sometimes I may forget to bring something home, but usually I forget to take things in the first place.

Almost every shoot I do has a slightly different gear requirement. So, the “gig profiles” looks particularly intriguing.

I’ve lost track of the number of times I used to forget to pack my radio triggers. So, I bought a few extra sets, and now keep a set permanently in each of the bags I use regularly. I’ve forgotten polarisers and NDs when I’m shooting video. I’ve even forgot to remove the camera batteries from their charger and put them in the cameras once (fortunately I did have a couple of fully charged spares in another bag).

But, it’s easy to solve these sorts of issues, and now I don’t have too many problems. Print up a checklist, then double & triple check everything the night before. Then another final check the morning of (just to make sure I packed those batteries that were charging overnight).

A tracking system like this, though, would shave hours off my prep time. My gear checklist would be made within the app itself, and it’d automatically fill itself in as I added stuff to the bag. It also tells me if I’ve left something in the bag from a previous shoot that I won’t need that day. Most of my locations are a good half an hour’s walk from where we can park the car, so every bit of weight saved is useful. 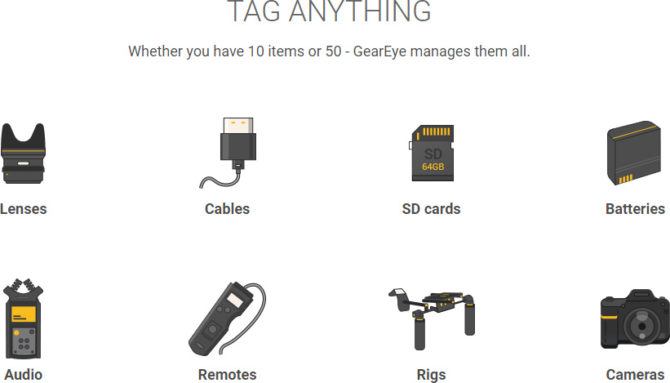 I’m not sure I’d need to go so far as tagging each individual memory card (I have far too many of them), but for the rest of my kit, definitely. A keyring would be nice, too. Most of my locations see me ending up waist deep or higher in water, so I usually throw my keys in a bag. Would be nice to know they’ve not fallen out before I get back home.

I think I’ll be backing this one myself once the Kickstarter goes live. I just hope this one actually comes to fruition.

What do you think? Are you excited for GearEye? Will you be backing the project? Or has the failure of KitSentry left you a little jaded and you’ll wait until it’s available for general sale? What solutions do you currently use for gear management? Let us know in the comments.