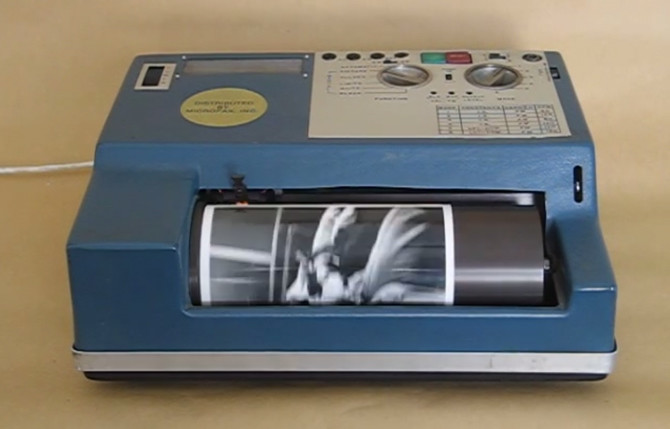 There’s no doubt many of us (myself included) take for granted just how easy we have it when it comes to making a photograph, much less making available to the world to see. Thanks to the digital revolution, we can go from exposing an image to posting it online in a matter of seconds. Obviously, it hasn’t always been so simple. Just ask any photojournalist that was working back in the 1970’s and 1980’s.

To be a photojournalist in the 80’s meant lugging around a “portable” darkroom everywhere you went so you could process and print your photos, which was a necessary step to get them sent off your boss. Before there was email (as we’ve come to know it in modern times), press photos had to be “wired” from the field to the photo desk using a special photo transmitter such as the United Press International’s UPI 16-S…

The UPI 16-S was most popular in the 1970’s through the mid-1980’s, but the United Press International were actually still using one of the machines up until 1991.

After a testing during the Los Angeles Olympic Games in 1984, Hasselblad came to the rescue in 1988 with a mass production of their Dixel 2000 photo viewer and wire transmitter. The Dixel allowed photographers the ability to scan their negatives and positives, preview the photos, crop, add caption information, before the machine transmitted the images to photo editors. No longer did photojournalists have to worry about carrying around the necessary dark room equipment needed to make prints, but the Dixel was also able to transmit the images in a fraction of the time as the UPI 16-S–the Dixel could send a black and white image in only a few minutes!

“From the 1920s through to the early 1980s, newspapers pretty much relied on the same workflow and the same technology. Photojournalists would travel to locations armed with a small portable darkroom, and the analogue “wirephoto” concept allowed transmission of processed, printed images – one at a time, slowly – to a picture editor’s desk, via wirephoto operators on the other side who would receive a print – itself having to be processed in a darkroom essentially. The equipment was bulky, fragile and the process of sending an image was measured in minutes – sometimes, hours.”

About a month ago, one of these bad boy’s popped on eBay for a price of £1,749.99 (that’s about $2,713.01 USD). The product description describes the machine as “…something a bit special, a bit rare, and a bit of a pain.” The listing also goes into great detail about how the Dixel works and makes a pretty convincing case for it’s importance to photojournalism history–check out an archived copy of the auction, here.

The 28 Photojournalists Unexpectedly Laid Off By the Chicago Sun-Times: One Year Later

« This Man’s Selfie with a Rattlesnake Cost Him $150,000…and a World of Pain
DaVinci Resolve 12 Beta Is Here – World’s ‘Most Advanced’ Non-Linear Video Editor »