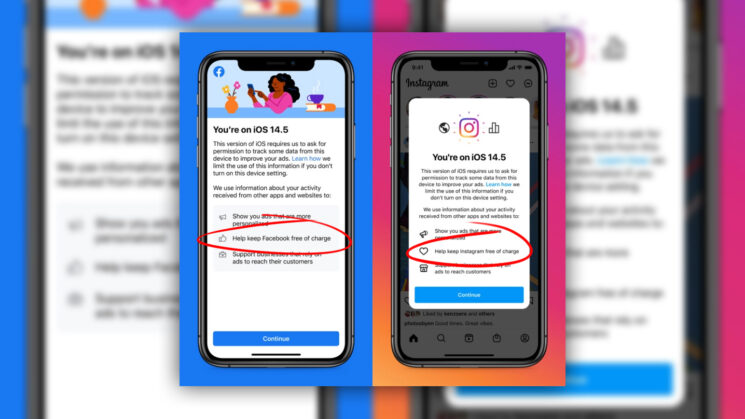 Well, this is kind of a surprise, but also not. It’s not surprising that Instagram (and Facebook) would be capable of trying something like this, but it’s a bit of a surprise that they actually went through with it. According to a new iOS 14.5 notice in the Instagram and Apps users are promoted to ask permission to track user data on the device to improve ads.

The initial statement seems all well and good, but when we get to how Instagram and Facebook say they use this data, one of the arguments given for both apps is to help keep it “free of charge”. Oh yes, that’s right. The “It’s free and always will be” philosophy of Facebook (and apparently other companies it owns) has apparently morphed into “It’s free as long as we get our way”.

The notification comes as Apple and Facebook fight it out over iOS 14.5. Apple wants to provide more privacy, control and transparency over the data you share, while Facebook wants as much of your private data as possible to become their data. To be clear, the only real change, at least according to Tim Cook, is that now, the Facebook and Instagram apps be required to explicitly ask you for permission to your data, instead of them just being able to take it.

We believe users should have the choice over the data that is being collected about them and how it’s used. Facebook can continue to track users across apps and websites as before, App Tracking Transparency in iOS 14 will just require that they ask for your permission first. pic.twitter.com/UnnAONZ61I

This hasn’t sat well with Facebook and despite Zuckerberg testifying before the US Senate Judiciary and Commerce committees in 2018 that “there will always be a version of Facebook that is free”, the new alerts in the Facebook and Instagram apps when running under iOS 14.5 suggest otherwise.

It was suggested during the testimony that a paid ad-free version of Facebook might come at some point, but he was pretty explicit that there would always be a free option. Of course, “free” might actually come with a cost attached after all. Your privacy. Targeted ads make more money. So for Facebook to lose the innate ability to track everything and require users to opt-in is surely going to make a dent in Facebook’s revenue.

If Facebook loses enough money to non-targeted ads for those who don’t allow Facebook to track their every move, it’s possible that their “free” version might, at some point, force a user tracking and data collection agreement in order to let them on the service at all. After all, choosing to not let them track you is still a choice. Albeit choice that Facebook might see as choosing to not use Facebook at all.

Facebook sees their position as “speaking up for small businesses” and that Apple’s policy will “limit their growth and their ability to compete with big companies”. They want you to think they’re taking a stand for the little guy against the big bad Apple and that you should be on their side in this particular conflict.

And I can see how they’ve managed to twist their argument into this position. This policy applies to small app developers, too. Any app that embeds advertising to subsidise the cost of developing and running an app will result in a similar prompt, potentially losing users and income.

In reality, the more realistic view is simply that it hurts Facebook’s bottom line. And that’s pretty much it. We already know they don’t give a crap about small businesses – except the ones paying them advertising revenue, obviously.

Personally, I have no horse in this race. I switched from iOS a few years ago and have no plans to switch back. Facebook and Instagram have given me absolutely no reason to care about their platforms, either. If Apple, Facebook and Instagram all disappeared tomorrow, it wouldn’t change my life one bit. I’m just sitting here with my bowl of popcorn.

« Here’s why you should upgrade your speedlight to a studio strobe
Price and more Leica 24-70mm f/2.8 L mount lens photos leak ahead of official announcement »