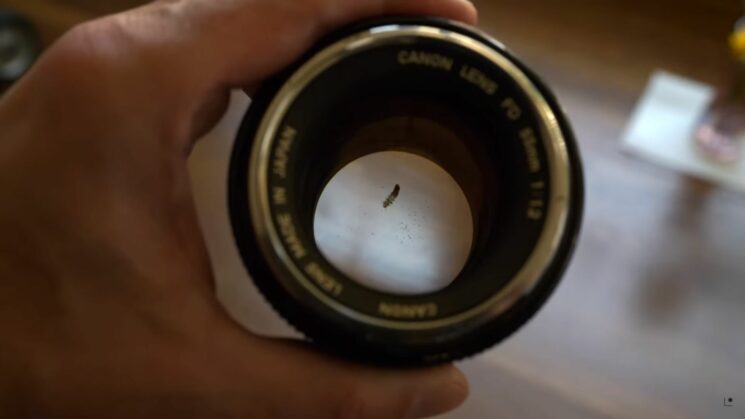 When buying a used lens, there are some things you definitely want to avoid. Is a bug jammed between the elements one of them? Surprisingly, it doesn’t have to be! Ted Forbes recently took one of his old lenses only to find a bug inside of it. He took some test shots and got some surprising results. Watch his video below to discover how a bug affects the images, and why you should consider buying even lenses that aren’t in perfect shape.

Ted bought an old Canon 55mm f/1.2 manual focus lens way back in the early 2000s. Sadly, one day it fell on the ground, the sides bent, and the focus stayed locked. Ted put it into a drawer in 2008 and it has been collecting dust (and apparently, insects) ever since.

But recently, ted remembered this lens and it finally saw the light of day again. He thought he had nothing to lose, so he gently bent the edges back in place and made the lens functional again. Sure, the focus has been fixed – but there’s a freakin’ bug inside of the lens! Still, Ted took some photos to see how it affects them, and in most cases – it doesn’t!

At maximum aperture and large apertures like f/2.8, the bug doesn’t show in the photos at all. It doesn’t even show in photos of textures or plain white walls. The only scenario where it’s visible is in bokeh balls, or when the lens is stopped all the way down.

Perhaps you remember similar cases from before. Guys from Lensrentals found a fly in a weather-sealed lens, which was particularly interesting. But it didn’t pose too much problem until the lens was stopped down. In fact, most of our lenses most likely have a bit of dust inside, and it doesn’t show in the photos.

All this is good to know when buying used lenses, particularly manual focus ones. If there are scratches, cracks, or cleaning marks on the lens element, or specks of dust inside of it (or even a bug) – you can make a bargain. You can get a great deal on lenses, and all those things won’t even show in most images. After all, you can also have the lens cleaned up, or do it yourself if you know what you’re doing.

Finally, there still are some things to avoid when buying second-hand lenses. One of them is fungus since it’s almost impossible to remove it. You can wipe it off, but it most often keeps growing. Also, if there’s any separation on the elements, Ted advises making a pass on that one as well.

I take good care of my lenses and I hope you do too. But I always find it interesting to see how resilient they really are and how much we can mess them up and still be able to use them without any problems. Has anything like this ever happened to you?

[BUG found in camera lens!!! | The Art of Photography]