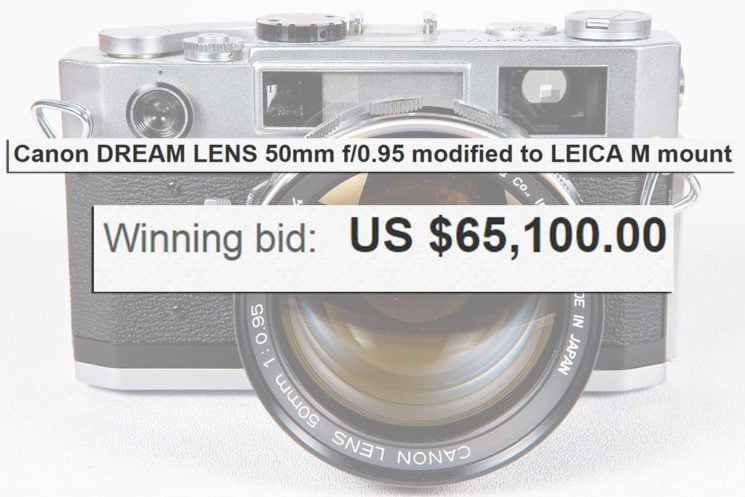 A couple of weeks ago, Canon 50mm f0.95 Dream Lens was stolen from photographer Daniel Zvereff. He was working on a project in Mexico when someone snitched it from his room. Not long ago, the photographer spotted his lens on eBay. After an auction, it was sold for whopping $65,100!

As Zvereff told The Phoblographer, he would put his valuables under his bed before going to sleep every night. Since the room had no AC, he had to sleep with the window open. That night, he switched the stolen 50mm for the 35mm and forgot to put the lens bag under the bed. Reportedly, the thieves snuck into his room by scaling the building and took his lens bag.

Zvereff is certain that the Canon 50mm f/0.95 on eBay is his because it’s an unusual lens converted to Leica M mount. The serial number on the lens matches with the one he bought several years ago. It’s even sold with his Red Filter and shipped via Mexican Postal Service.

When he spotted the auction, Zvereff contacted eBay, but they told him they couldn’t do anything about it. They urged him to file a police report so they can flag the seller. However, the photographer wasn’t able to do it immediately because he wouldn’t be able to work due to the long process, as he told The Phoblographer.

The auction has now ended and the lens was sold for the incredible $65,100.

Zvereff told PetaPixel that the amount of support he received from the photo community was tremendous. However, he says he made peace with the fact that his lens is gone, and that he’s”totally ok with it.”

If you know anything about the lens or can help Zvereff in any way, contact him on this email.

Photographer finds a bug in his lens. But will it show in the photos?