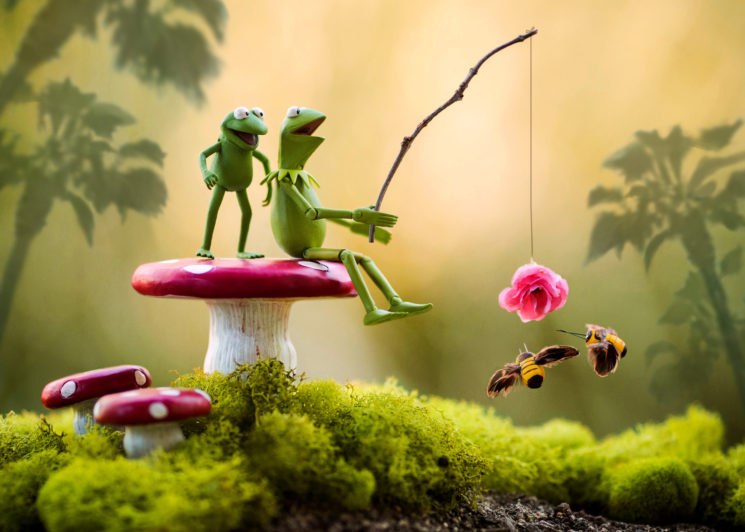 We have presented the awesome work of Mitchel Wu before. After creating crazy “Toy Stories,” he’s back with the adventures of Kermit the Frog. He’s one of the favorite characters of many of us (myself included), and Mitchel’s photos show him in a range of fun and incredible situations.

While one may think it takes a lot of Photoshop to create these photos, the truth is that it was all taken in camera. The splashes, the jumps and the levitations – they were all achieved using practical effects. We chatted with Mitchel about this super-fun collection of photos and the process of making them. Als, he shared with us some of the challenges and joys of toy photography as a career. 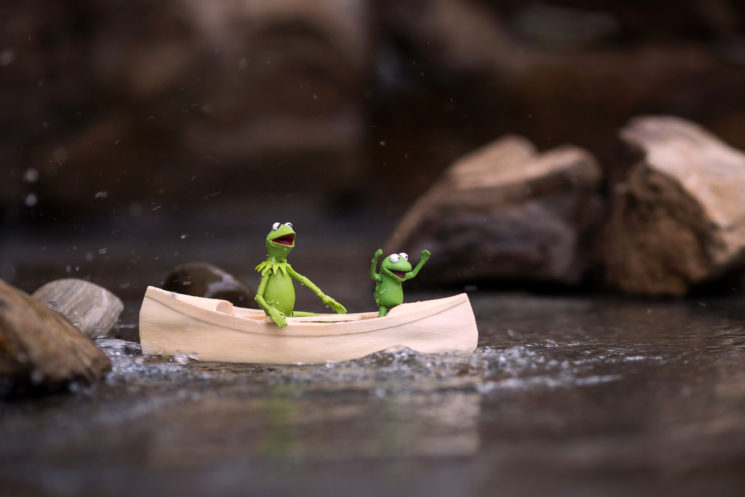 Mitchel lives in Southern California and is the owner of Mitchel Wu Toy Photography. Before he became a toy photographer, Mitchel photographed weddings. But when he rediscovered toys as an adult, his focus gradually began to switch. He says it’s been an amazing (re)discovery, and from then on, he never looked back. Today, as a professional toy photographer, he creates images for toy companies for use in their social media, and for publicity and promotion.

Mitchel has a degree in illustration from the California College of the Arts in Northern California and has been focused on creativity throughout his entire career.  He worked at the Walt Disney Company for 6 years and later had creative collaborations with Sony Pictures, Warner Bros, Lucasfilm and Cirque Du Soleil.
Of course, while toy photography is as fun as you can imagine, it’s not just “playing with toys.” Like any other photography genre, it comes with its challenges, and we asked Mitchel what some of them are.

Having photographed weddings professionally for years, I came to toy photography with a strong foundation in photography. But creating amazing images and making a career out of it are two very different things. The challenge most photographers face is knowing your worth and not selling yourself short. Photography is one of the most competitive fields to work in, to succeed you have to know your worth and commit to it. This is easier to do if you have a unique style and can offer something to clients that others can’t.  Creativity, differentiation, technique and professionalism are all critical to being able to do this on a professional level. 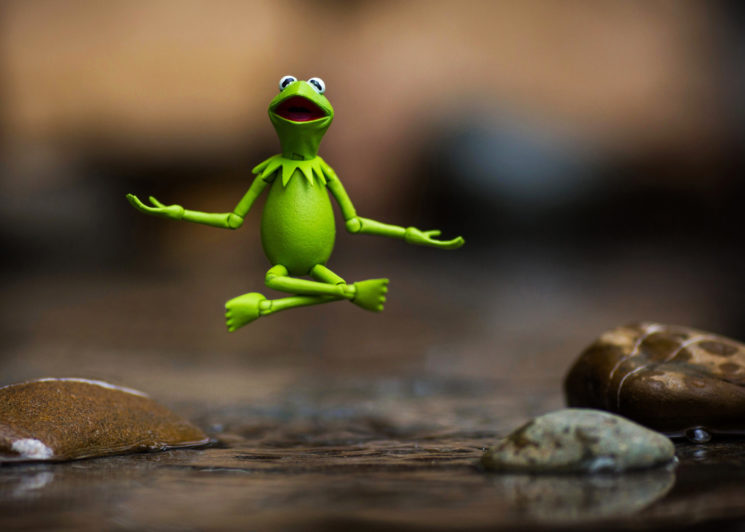 So far, Mitchel has worked with many toy companies and created plenty of photos of different toys. And now that he decided to photograph Kermit, it was interesting to hear what made him choose the popular frog.

As a toy photographer I love creating images and stories from a wide range of characters – from super heroes to Toy Story; from Lord of the Rings to Star Wars.  I’m often drawn to characters that are fun, quirky and endearing.  One of my favorite characters to create stories around is Kermit the Frog, from the Muppets.  Kermit is a character that has been around for decades, but seems as contemporary today as he did when he first made his debut in 1955.  He’s one of those rare characters that work in heartwarming situations, as well as humorous or adventurous ones.  I love to take advantage of that in my imagery. 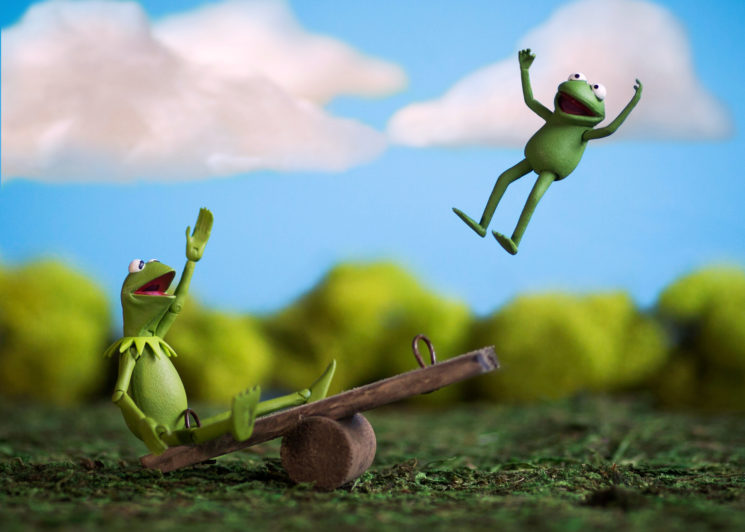 Mitchel’s photos, as I mentioned, are made by using practical effects. It’s not always easy preparing and taking the shot, and we asked Mitchel how much time it takes to create his photos. He divides his toy photography into three stages: setup, photography, and editing. Although they are separate stages, they are also connected and dependent on each other.

As for the time he takes, it varies and depends on the complexity of his idea:

If an image doesn’t require multiple figures in complex poses, or complex effects, then I can take it from start to finish in an hour or less.  The image of Kermit and Robin hugging, or of them in the salad, are good examples of great stories with simple setups.  But for more complex images, like where they are fishing for bees, the setup alone might take an hour or more, as will the final editing.  So my range is probably an hour or less for simple images, to half a day or more for the most complex images. 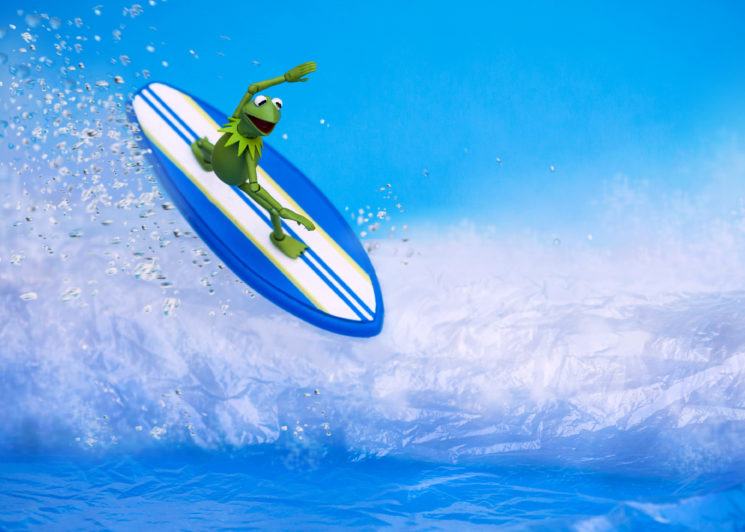 I imagine many of you are interested in finding out what gear Mitchel uses for his photos. So, we had that covered too. It’s interesting that he uses a Canon 5D Mark III paired with a Canon 135 f/2L in 99% cases!  He almost always shoots with this body/lens combo at f/2.  In addition to the camera and lens, there are his trusting Lowepro backpacks. As for the tripod, he uses the Manfrotto tripods: Manfrotto 190 GO! Carbon Fiber Tripod for location shoots, and the Manfrotto 055 Carbon Fiber Tripod for studio shoots.  Both tripods have vertical columns that can convert to horizontal columns in seconds – so he can get the camera down to the toy’s level, just inches off the ground.

As for the lighting, he works with a variety of lighting systems. The one he uses most is Manfrotto Lykos Bi-Color LED lights, which are continuous lights with brightness and temperature control.  He uses them for key lights as well as for fill.  For more specialized lighting, he sometimes uses Canon speedlights with MagMod diffusers and modifiers.  When he wants to create smoke or fog for his images, he uses Atmosphere Aerosol.  This is a product that was originally created for filmmakers and wedding photographers, but toy photographers have really embraced this product.  He also uses a SOG multi-tool for a variety of purposes, but mostly for creating and cutting wire supports for his figures. Lastly, he uses a SpiderPro camera holster and SpiderPro hand strap to keep the camera securely strapped to his body or on his hand. 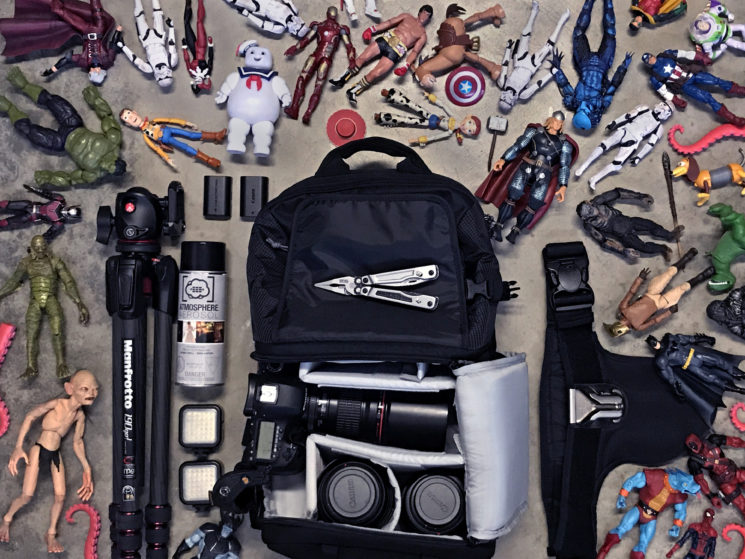 You have seen a few photos of the Kermit collection, and now, here comes the rest. Some of them contain a little background story from Mitchel, and I’m sure you’ll find it amusing just as much as the photos. Kermit fans and those who love toy photography will love this series. And as for the rest of you, these photos could make you dig out your (or your children’s) toys and play with them again, this time as a photographer. 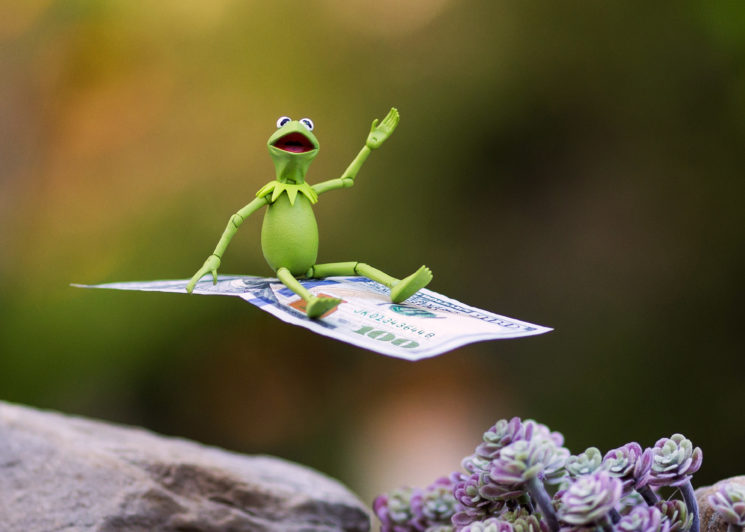 “I created this image at tax time. I owed a bit of money to Uncle Sam and wanted to create an image that captured the feeling of having my hard-earned money flying away, haha!” 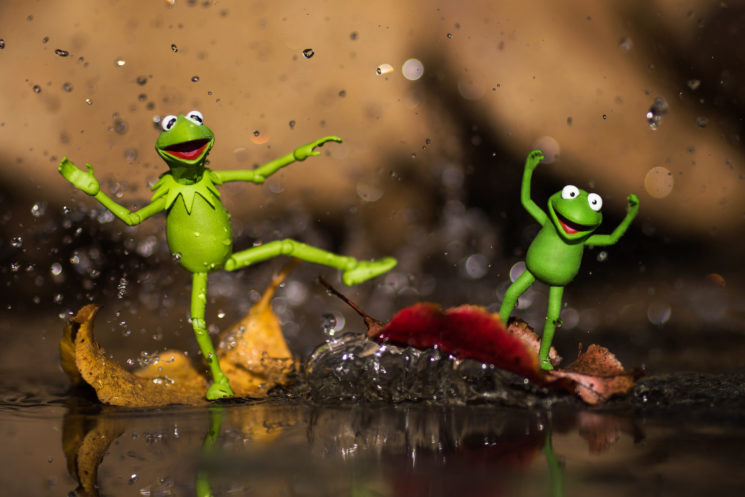 “In some images, like this one, I simply want to capture fun and adventure. And even better if it’s a shared experience, like here, with Kermit and his nephew Robin. I really enjoy incorporating water into my images – water always adds to the story, creates a strong sense of place, and can be used to create motion and action. All of the water scenes you see featured in this article, including this one, were created on my stone patio in my backyard. I put some rocks in the background and poured some water onto the ground. Voilà, instant lake, ocean or river!” 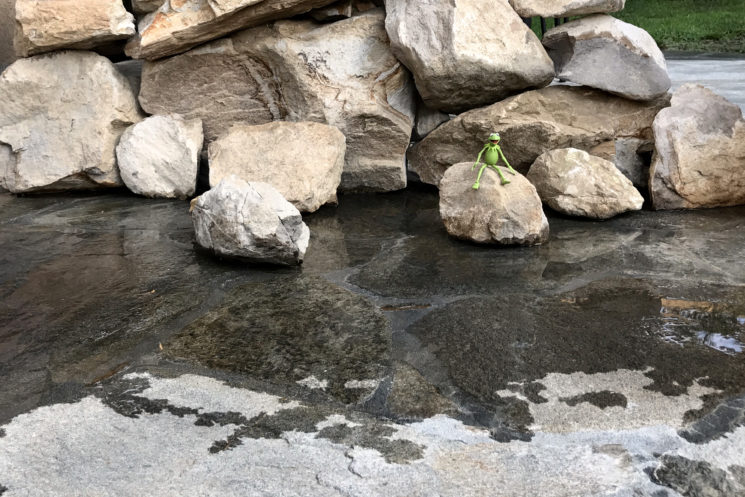 “I titled this image, “To Bee or Not to Bee….” I recently traveled to Alaska to fish and felt inspired to create this image when I returned home. I ended up taking this photo on my porch. That’s the beauty of toy photography – entire worlds can be created in a small space around your home or yard. Or you can take your toys to the most incredible locations to shoot – the beach, national parks, the desert – it’s up to you and the stories you want to tell.” 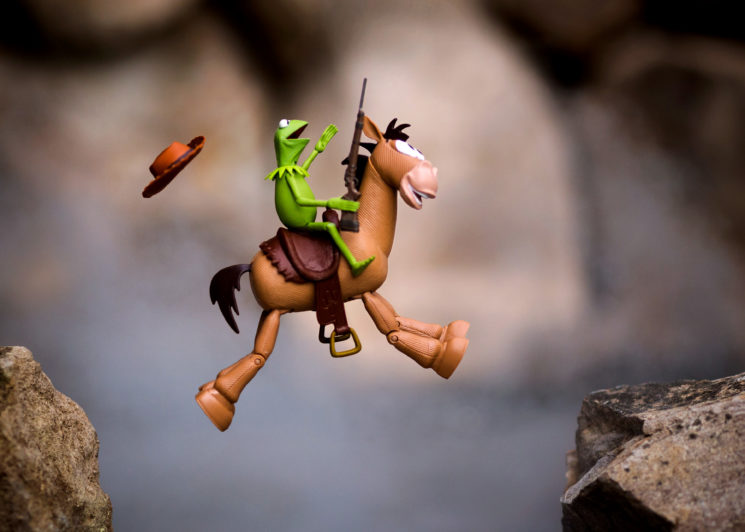 “‘High Plains Drifter!’ This was a fun mashup (meaning the mixing of two different properties) between Kermit and Toy Story’s Bullseye. I use practical effects in my images, meaning any smoke, liquid, fire, etc that you see was real and captured real time in the scene. The fog in this image was created using Atmosphere Aerosol, also known as fog in a can. Just spray it into the scene and instant fog!” 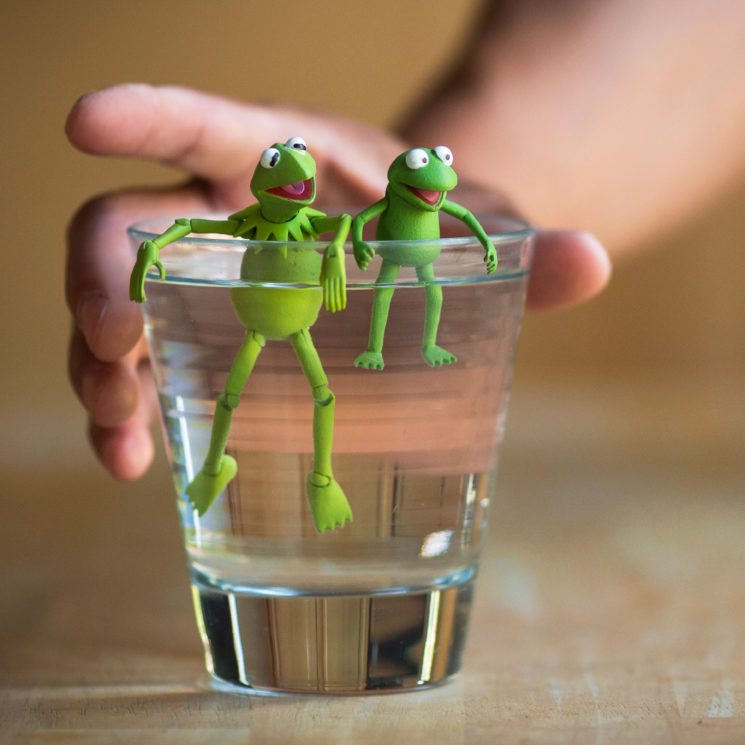 “Sometimes a good cliche’, metaphor, pun or word play can inspire or drive an image. When I created this image I was thinking about the term ‘got a frog in my throat.’ I ended up using the caption, ‘And this, people, is how you end up with a frog in your throat!'” 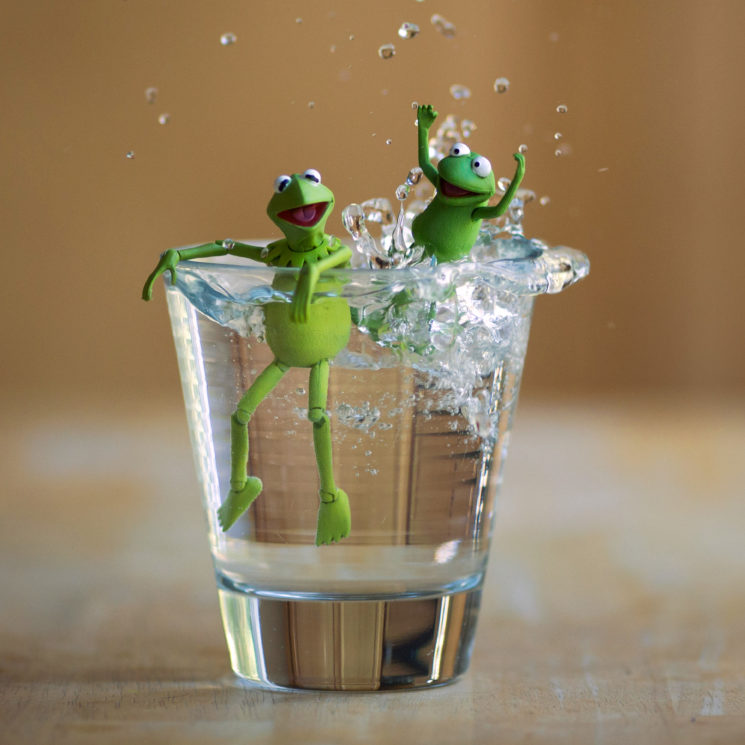 “I love using water and water splashes in my images. It is one of the most challenging practical effects to pull off successfully though as it’s unpredictable and difficult to control. It often takes multiple attempts before I get a splash that I like. It’s also very time consuming because so much cleanup is required between attempts, and the entire scene usually needs to be setup again. This particular image, though, was really rare in that I nailed the water splash on my first attempt. That never happens! There are a couple ways to get water to splash like this. You can use a straw and simply blow air into the water to make it splash. Or you can use a can of compressed air to do it. Either way, a fast shutter speed is required to capture the splash. And towels. Lots of towels for cleanup.” 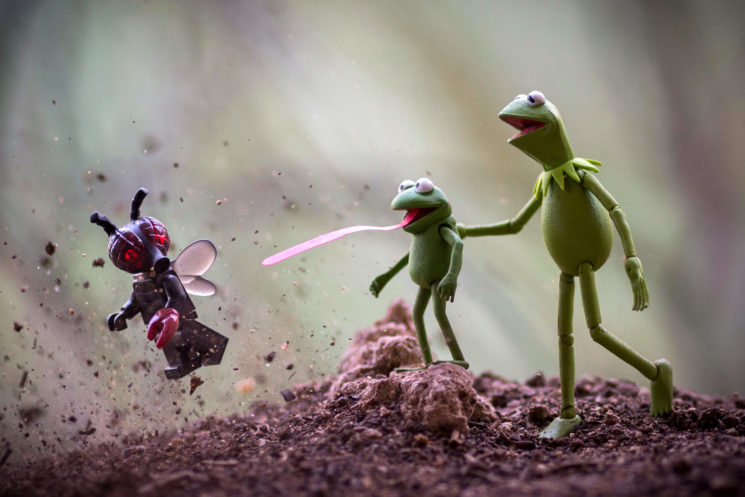 “This is another example of a fun mashup, this time between Kermit and a LEGO fly. The inspiration behind this image was how parents pass down traditions and skills to their kids (or in this case, nephew). Here we see Kermit teaching Robin how to catch flies…something every young frog needs to learn. You know the saying, ‘Give a frog a fly and he eats for a day. But teach a frog how to catch flies and you feed him for life.’ Okay, I may have changed that saying just a little for my own purposes!” 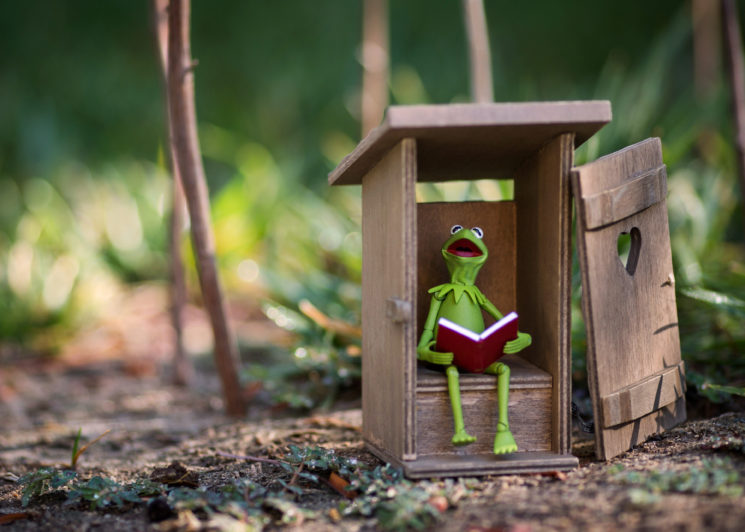 “One of the things I love doing with my toy photography is showing characters in unexpected ways or unexpected situations. Did you ever expect to see Kermit in an outhouse?” 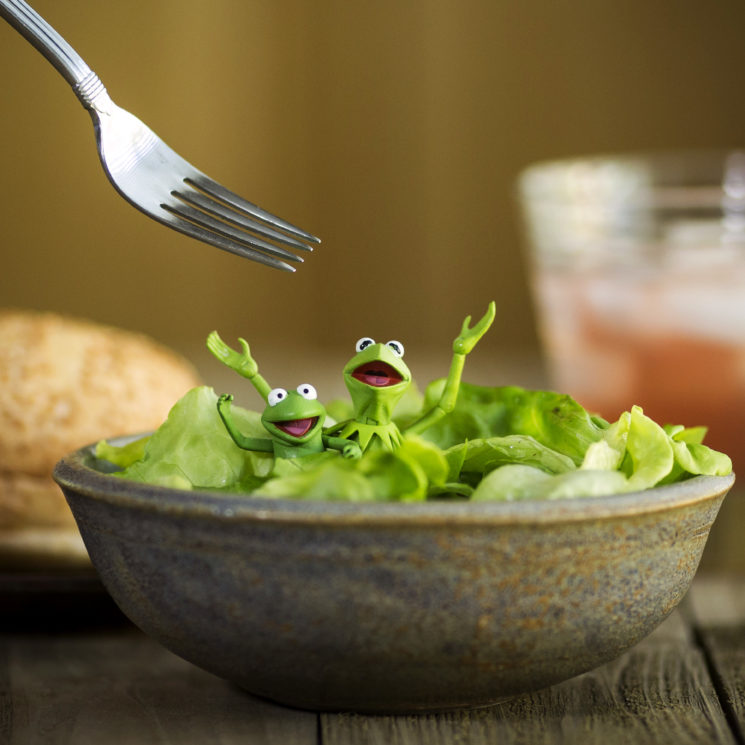 “I never know where my next idea will come from. This image was inspired by a fun story in the news recently about a woman who found a tiny live frog in her prepackaged, ready to eat salad. She and her family ended up naming it and keeping it as a pet.” 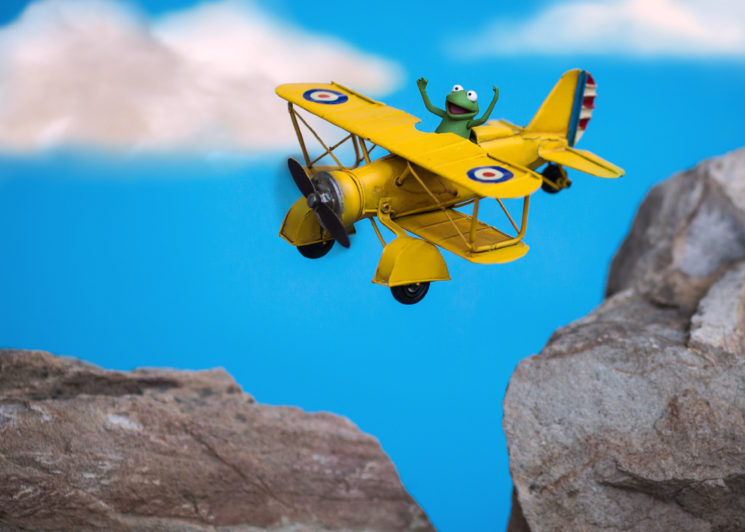 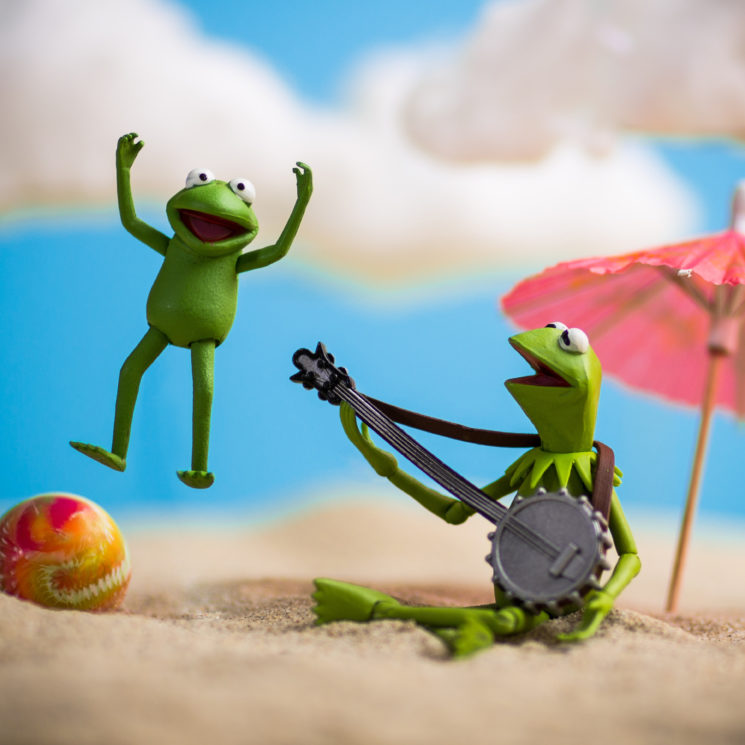 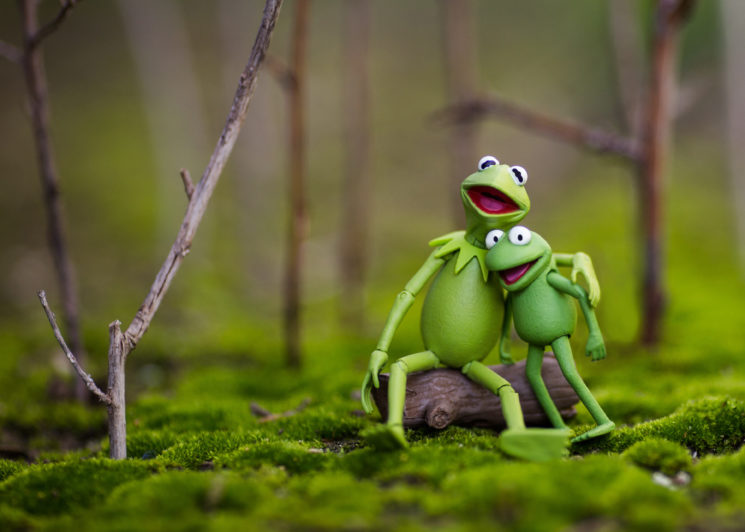 Mitchel Wu is a Los-Angeles based professional toy photographer. He creates stories and alternate universes through toy photography, capturing the illusion of motion, and emotion, where none exist. His photos bridge the gap between sculpted pieces of painted plastic and the stories in one’s head. For more of his awesome work, give him a follow on Instagram, like his Facebook page and check out his website.