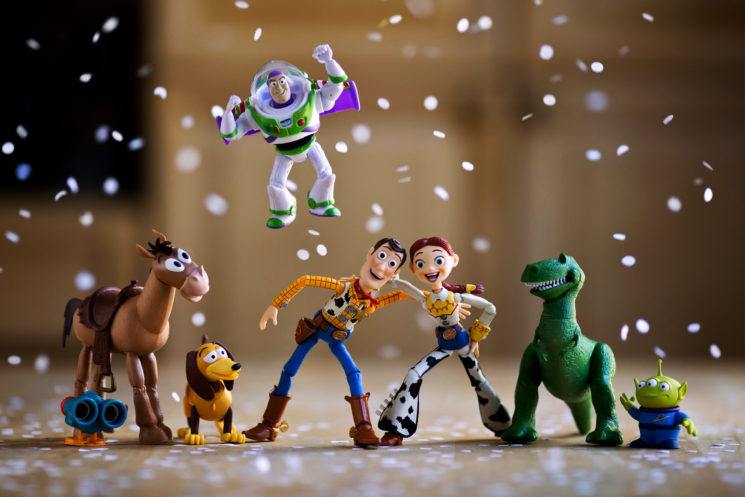 I’m amazed by the art talented photographers can make with toys, and one of such photographers is Mitchel Wu. He creates “Toy Stories” using the toys from the popular Pixar’s franchise. His photos show action frozen in time, but he doesn’t add the objects in Photoshop. Everything you see is created in the scene and in real time. So, it’s real water and coffee splashes, real “flying” objects, and even real fire! A real mess, but most of all, real fun.

Mitchel was kind enough to talk to us and tell us some more about his work and how he creates these amazing photos that freeze the action in time.

I’ve been photographing toys for about 14 months now.  I photographed weddings, portraits and lifestyle for the previous 6 years but was getting tired of missing so many weekends with my daughter and wife.  I photographed my last wedding in Nov 2015, just before my nephew introduced me to toy photography.  I already had all the camera gear I needed, but had none of the toys!  I guess you could say that I’ve spent a small fortune on toys over the past 14 months haha!  I spent a solid year learning and refining my techniques and developing a style that I feel is uniquely my own.  This year I will create hundreds of images for various clients, one being one of the biggest toy companies on the planet.  I’m loving it! 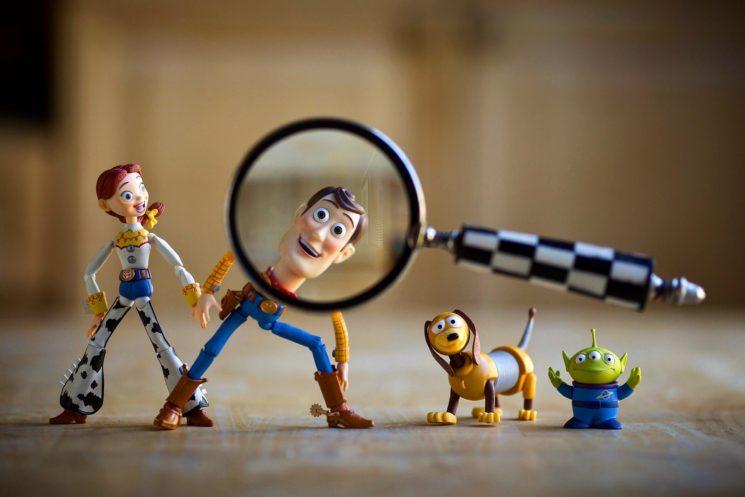 Wow, that’s a really tough question.  I photograph so many different types of toys, but Toy Story is probably my favorite property to create images from.  I’m sure it has to do with my having watched the various Toy Story movies a million times with my daughter as she was growing up – it’s one of those movies that appeals to both the young and young at heart.  I also love that the characters are actual toys, and not characters that had toys made of them.  Because of this I always try to keep Woody and the gang in character, doing things and getting into situations that one might expect to see in one of their movies.  I have a deep respect for what Pixar and their talented story writers and animators created and try to have that come through in my images.

Okay, so back to your question…I would say my favorite would have to be either the image of Buzz Lightyear flying over the table with all the office supplies flying up behind him, caught in is turbulence, or the image of Bullseye (the horse) kicking over the glass of water on Woody.  Both of those images have strong stories behind them and really represent me trying to push the creative and technical envelope. 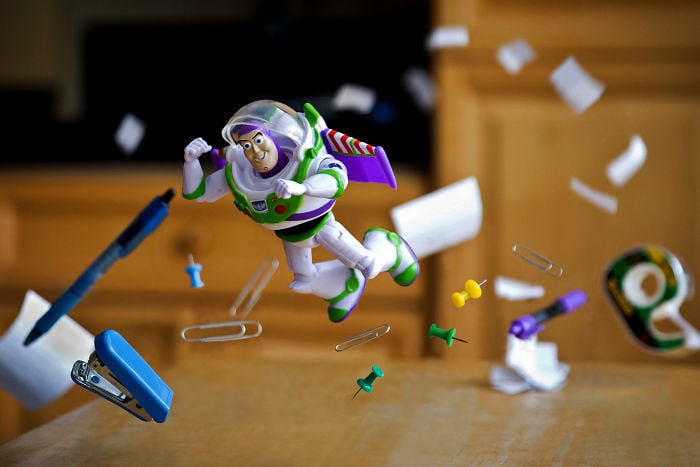 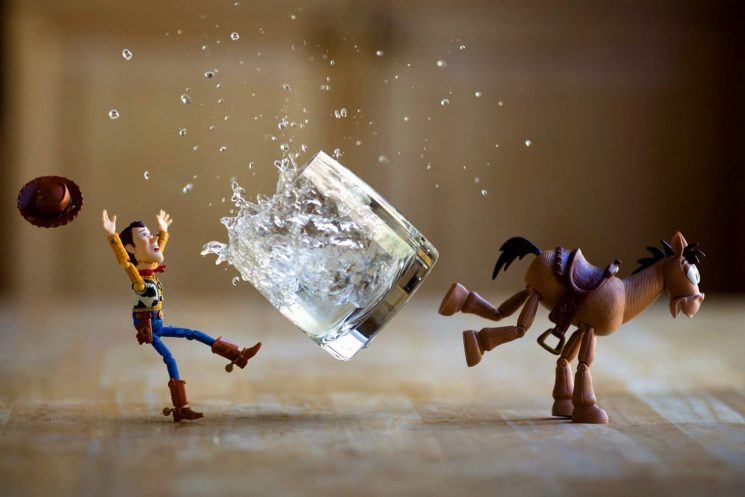 For the Buzz image it was me really trying to push the effect of things flying, not just Buzz but all the paper clips, pins, pens, etc.  And for Woody and Bullseye, that was the first time I executed a real liquid splash in one of my images.  But for me the number one element is story.  Is there a fun, compelling story behind the image?  My one bit of advice to any toy photographer would be to focus on the story.  To me, an image with a great story always beats a great image without a story.  So while effects are great, story should always come first.  I think this probably applies to the visual arts in general.  When was the last time you saw a movie that had amazing special effects, but then left the theater feeling underwhelmed and disappointed?  That’s exactly what I’m talking about. 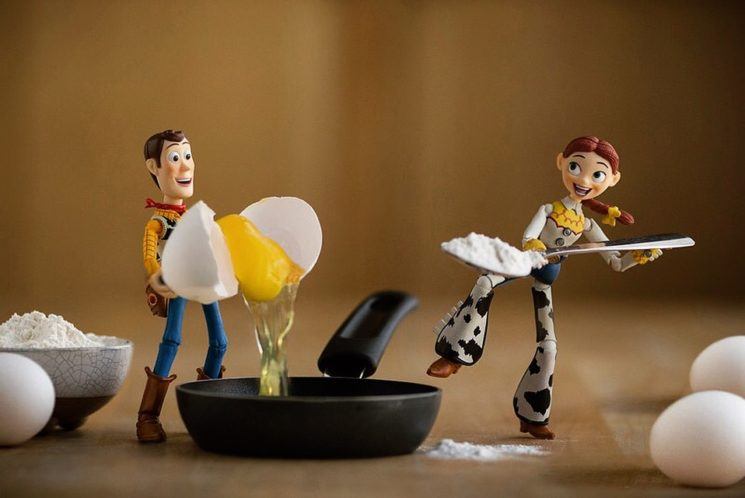 For me, creating an image with a fun, compelling story is often the most difficult to make.  I’m confident that once I have the idea and story I can create an image around it, and it usually comes pretty close to how I envisioned it.  If I can bridge the gap between a sculpted piece of plastic and the stories in one’s head then I know I succeeded.

But from a technical standpoint, which I know is what you’re really asking, I’d have to say the images that involve some sort of liquid splashing are the most difficult.  You really can’t control how something is going to splash exactly, so there’s always a bit of luck involved.  And potentially many takes as well.  And then the cleanup!  My most recent image with Buzz spilling the coffee on Woody was an absolute mess!  I use practical effects in my images, meaning everything is real and was captured realtime in the scene.  There’s an authenticity to capturing something real in a scene that can be difficult to match with a digital effect (at least for me). 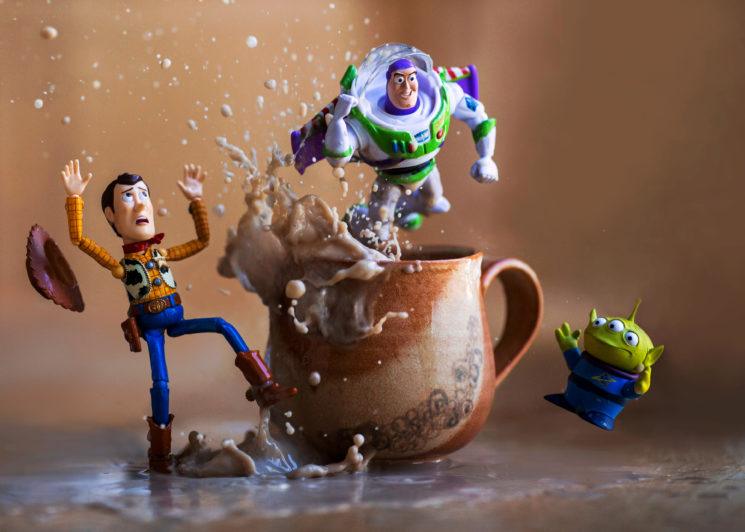 If you wonder what gear Mitchel uses, it’s Canon 5D Mark III, usually paired with a Canon 135L shot at f2.  He uses Lowepro bags, Spider Holster and MagMod lighting modifiers and diffusers. And now, take a look at some more of Mitchel’s photos from the series: 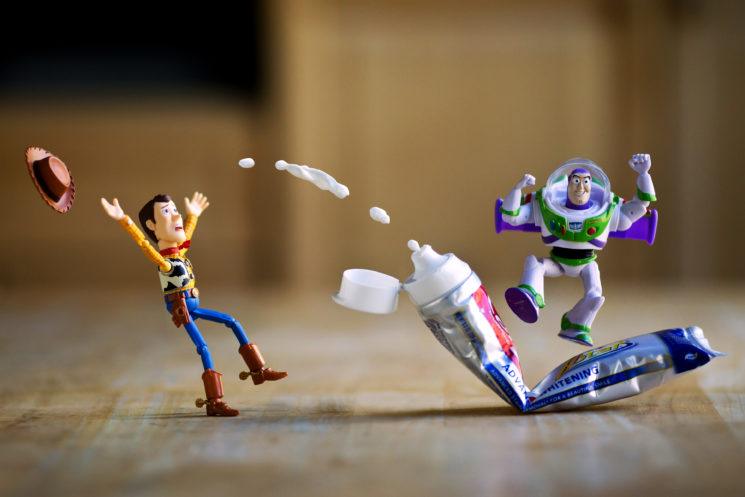 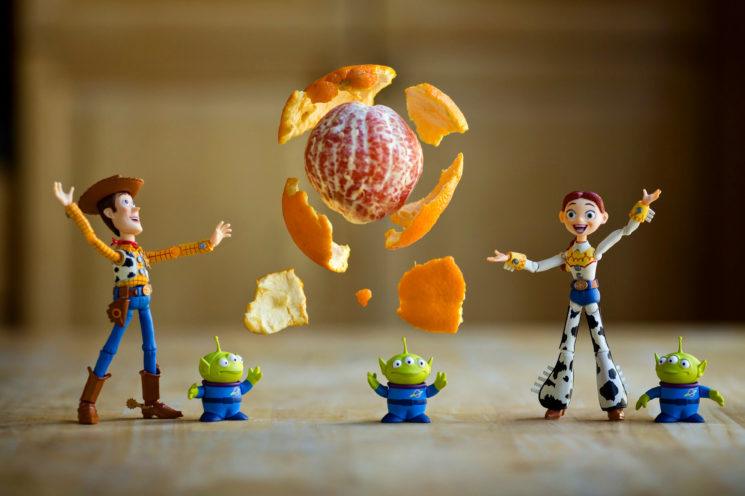 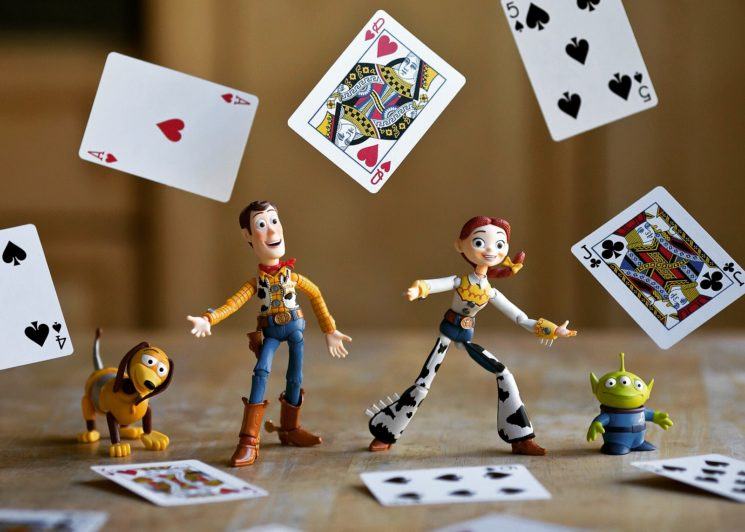 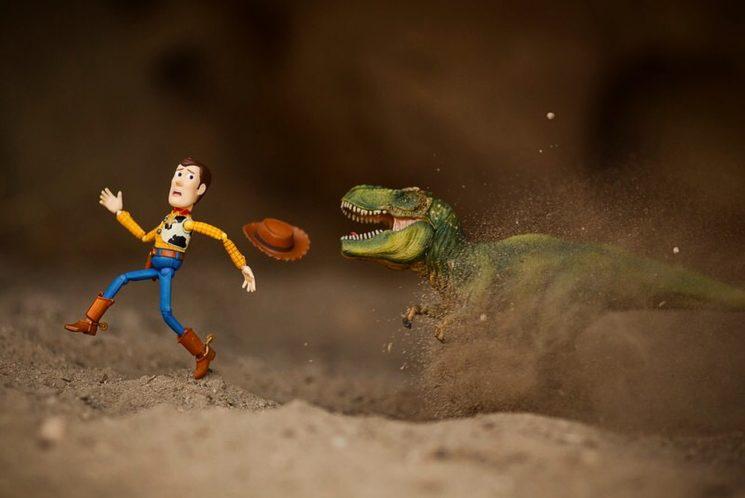 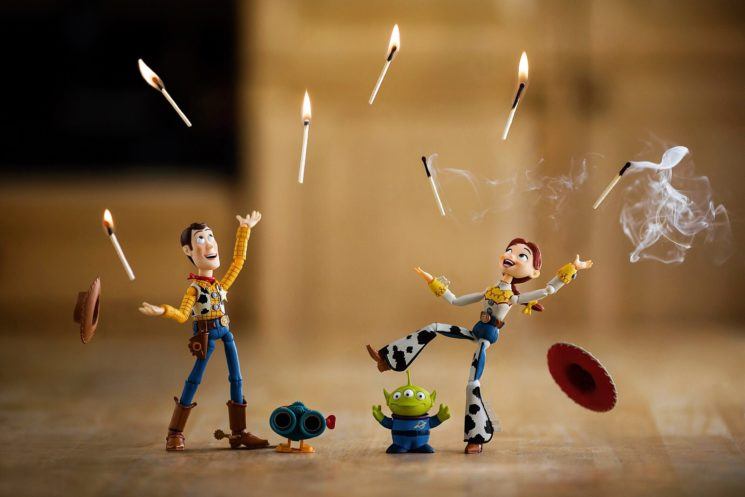 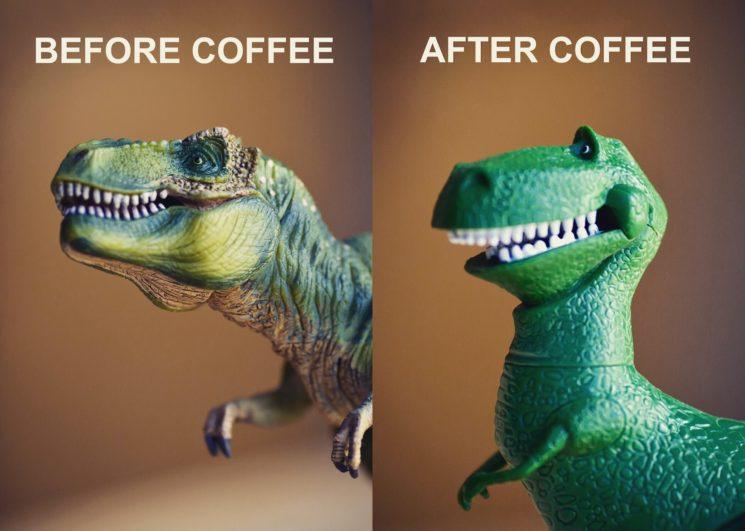 I hope you enjoyed this series as much as I did. I am sincerely amazed by the quality of the photos and the effort Mitchel makes to create them (and to clean up afterward :)). You can tell that these photos really took some preparation, concentration and time – but it was totally worth it!

Thank you, Mitchel, for sharing the photos and for taking the time to talk to us.

Mitchel Wu is a Los-Angeles based professional photographer. He creates stories and alternate universes through toy photography, capturing the illusion of motion, and emotion, where none exist. His photos bridge the gap between sculpted pieces of painted plastic and the stories in one’s head. For more of his awesome work, give him a follow on Instagram and like his Facebook page.