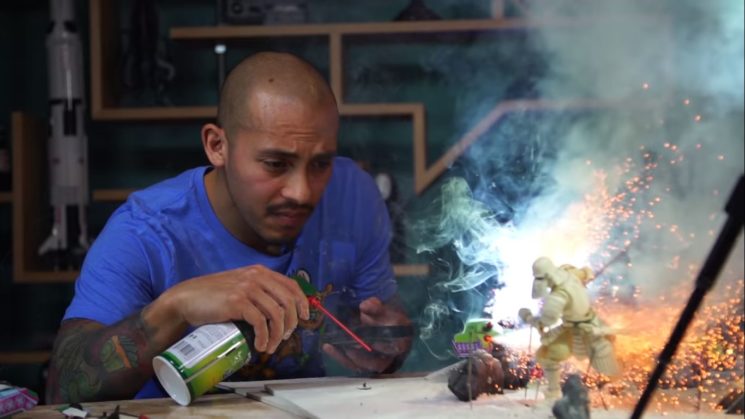 When photographing toys, there are so many tricks that can make your scenes look lifelike and realistic. To add an extra kick to certain scenes, you might need to create mini-explosions, all of which can all be done with practical effects. In this video, Norm from Adam Savage’s Tested hosts toy photographer Johnny Wu. He guides you through his process for creating blast effects in his toy photography and shares some handy tips and tricks that you can use in your work.

Johnny creates a scene with Snow Troopers and snow. For the snow, he uses good, ol’ flour: he sprinkles it around the scene and uses a bit of canned air to even out the “snow.” For the explosions, Johnny uses sparklers. In the video, you can see that he uses the kind of sparklers that look like tiny tanks. I couldn’t find any of those on Amazon, but I guess you could go with the regular ones, too.

Other than the kind of sparklers, there’s one more thing to consider: their position. Johnny suggests that you don’t go overboard and let the “explosion” take over the scene. Let it be more of a “background” effect and not the main element of your shot.

Once you light the sparkler, you can also use some canned air to disperse the smoke in your scene, which will add dynamics to the shot. Also, don’t forget to set your camera to burst mode, so you have more images to choose from.

Finally, it probably goes without saying that you should be careful with sparklers and try not to set anything on fire. But I believe that you already know that. : ) So, if you’re into toy photography, I hope that you’ll try out this technique and have a blast!