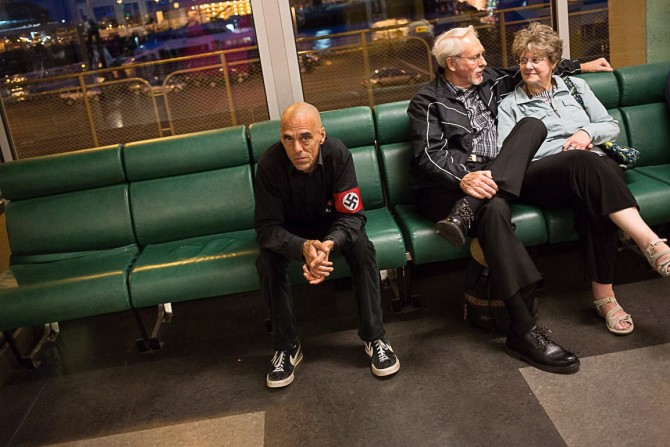 Photographer Jay Trinidad was on his way home when he came across a man wearing a red armband, proudly displaying the Nazi swastika at Seattle’s downtown ferry dock.

His initial reaction was to walk away from the situation, but he decided to return and capture the image that has people wondering what’s wrong with our society.

As if walking around parading Nazi symbols isn’t bad enough, this person was out and about sharing his hatred just one day after the Charleston massacre, “basically sticking his middle finger up to everyone who could see him”.

Perhaps this photograph will open peoples’ eyes to how messed up things are.

“I was walking around the terminal and then I saw him,” Trinidad told The Stranger. “I’m like, ‘He’s really doing that? Today?’ There were people sitting next to him. There were a lot of people around. It just struck me as bizarre… Here’s a guy with Nazi armband and no one is pointing and saying, ‘What is going on there?'”

Jay’s photo might not be composed by the rules and the horizon is skew (due to the circumstances, I’m sure), but it carries a serious punch. The powerful subject and the story behind it turn the image into one of the most important photos I have seen lately, and hopefully it will get the attention it deserves. Not for Jay’s publicity or ego, but for the same reason he took the photo – peoples’ indifference to the entire situation.

“What struck me about this was the complete brazenness on the day the whole country was learning about Charleston. It struck me as him basically sticking his middle finger up to everyone who could see him,” Jay said.

But as the saying goes, “all that is necessary for the triumph of evil is that good men do nothing”, and in this case plenty of nothing was going on.

The neo-Nazi just went along his business, as if he was wearing his Boy Scouts uniform, and according to Jay nobody said or did a thing. I’m not saying the elderly couple sitting beside the man should have made a Citizen’s Arrest, but I’d at least expect them to move away in disgust of what he represents.

Jay commented on the couple as well stating that “either he sat down next to these people and they didn’t move, or they sat down next to him. Either way, you cannot miss the gigantic swastika on the guy’s arm… It’s like he’s trying to flex his little Nazi bicep.”

The focus here isn’t this specific couple, so I’m even willing to give them the benefit of the doubt that they did not see the Swastika, but there were many others how didn’t care either.

Jay was asked by The Stranger about the racial makeup of the crowd, to which he replied “they were white people and they were on their phones”.

Wondering “how many people in that waiting area had no problem with that guy?”, Jay (and I assume this is in part due to him being a dark-skinned Filipino American) said he was really bothered – by the whole experience.

I wonder how the same people would react if instead of the neo-Nazi it was a black supremacist sitting beside them, perhaps calling for the death of white people.

Also interesting is how the general public will respond to Jay’s photo, and how they would have responded in comparison had the story been about black people ignoring a black supremacist.

Something is seriously wrong with our society and it is easy to blame it on the government or claim that law enforcement agencies are the ones out of control.

We have covered many stories where police or other law-enforcers over-stepped their boundaries, and others where politicians had attempted to make it easier for the police’s bad apples to get away with their wrong-doings.

I can go on for hours writing about the U.S. Marshal who smashed a citizen’s phone, the park ranger who tased a drone operator, the NYC journalist who was forced to stop record on public property or the ridiculous bills proposed in Texas and Wyoming. There’s no doubt that the authorities sometimes get out of hand or serve themselves instead of the public, and when racism is added into the mix things get ten times worse as we’ve seen in recent tragic events, but that’s no excuse.

At the end of the day, the first words of the U.S. Constitution are “We the People” not “They the Government”. We can’t, and shouldn’t, sit on our hands and wait for our government, no matter where we live, to fix every problem out there, especially when government agencies often suffer from the same issues and racism found throughout the rest of our society.

It is up to every one of us to fight to make this world a better place, and remember that the little things do make a difference. Showing your disapproval of a neo-Nazi by moving away from him is one way. Taking a photo of him, and the indifference of the people around him, and sharing it online for the world to see is an even better way.

People can’t pretend that racism isn’t alive and kicking in America when one day nine innocent people are murdered for the color of their skin and the next day a white supremacist walks around unnoticed, uninterrupted and un-puked by society.

The composition isn’t perfect, the horizon is skew and the location isn’t exotic, but it’s this photo, taken by a photographer on his way home, that might rattle at least some people enough to get them off their asses and realize things can’t go on the way they are.

It’s this photo that reminds us, among all the selfies, the Instagram duck-faces and the 5,000 photos of your neighbor’s dog, just how powerful of a tool photography can be, how much impact one single photo can carry and how meaningful one person’s action can be, in face of the indifference of the rest.

Normally I’d apologize for rambling so off topic; racism doesn’t have much to do with photography, but in this case it has everything to do with it and it’s why I love photography. Not for the perfect exposures, the advanced technology available in today’s cameras or the extra attention from people; it’s the story a photo can tell, the feelings it can bring up and the actions it can set in motion that I love so much about photography – and in a day where every second person calls himself a photographer, I think Jay Trinidad is one in the truest form of the word.

Searching for the Miao Goddess

This new tool detects deepfakes by searching for heartbeat